Various factors enter into a city's cost-of-living for expatriate
Expatriate
An expatriate is a person temporarily or permanently residing in a country and culture other than that of the person's upbringing...
employees, such as monetary value, consumer confidence
Consumer confidence
Consumer confidence is an economic indicator which measures the degree of optimism that consumers feel about the overall state of the economy and their personal financial situation. How confident people feel about stability of their incomes determines their spending activity and therefore serves as...
, investment
Investment
Investment has different meanings in finance and economics. Finance investment is putting money into something with the expectation of gain, that upon thorough analysis, has a high degree of security for the principal amount, as well as security of return, within an expected period of time...
, interest rates, exchange rate
Exchange rate
In finance, an exchange rate between two currencies is the rate at which one currency will be exchanged for another. It is also regarded as the value of one country’s currency in terms of another currency...
s of the country's currency
Currency
In economics, currency refers to a generally accepted medium of exchange. These are usually the coins and banknotes of a particular government, which comprise the physical aspects of a nation's money supply...
, and housing costs. This list does not account for cost-of-living savings accrued to local citizens through government-subsidized housing, health care
Health care
Health care is the diagnosis, treatment, and prevention of disease, illness, injury, and other physical and mental impairments in humans. Health care is delivered by practitioners in medicine, chiropractic, dentistry, nursing, pharmacy, allied health, and other care providers...
, and education
Education
Education in its broadest, general sense is the means through which the aims and habits of a group of people lives on from one generation to the next. Generally, it occurs through any experience that has a formative effect on the way one thinks, feels, or acts...
, differences in taxation, and many other factors irrelevant to expatriates. Cost of living may be much higher for expatriates than for local residents in a developing country
Developing country
A developing country, also known as a less-developed country, is a nation with a low level of material well-being. Since no single definition of the term developing country is recognized internationally, the levels of development may vary widely within so-called developing countries...
, especially if expatriates expect a standard of living similar to a developed country
Developed country
A developed country is a country that has a high level of development according to some criteria. Which criteria, and which countries are classified as being developed, is a contentious issue...
. 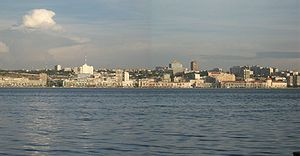 Mercer's Cost of Living surveys are taken in March of each year.

The survey covers 214 cities around the world and measures the comparative cost of over 200 items in each location, including housing, transport, food, clothing, household goods and entertainment. It is designed to help multinational companies and governments determine compensation allowances for their expatriate employees. New York is used as the base city and all other cities are compared against New York. The cost of housing plays an important part in determining where cities are ranked.

The Economist Intelligence Unit's Worldwide Cost of Living ranking is based on price data that are adjusted for recent exchange-rate movements. The price of housing, generally the largest cost of living, is not included as this tends to be provided by the company and does not factor in adjusting the salary of the expatriate employee.

The top 20 most expensive cities for expatriates according to surveys of almost 400 cities released in March 2010 and 2009 by ECA International. Surveys are done every March and September. The survey does not include certain living costs such as accommodation, utilities (electricity, gas, water costs), car purchase and school fees. These are usually compensated for separately in expatriate packages from cost of living allowances.