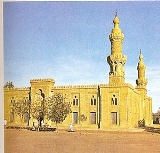 
Khartoum is the capital and largest city of Sudan
Sudan
Sudan , officially the Republic of the Sudan , is a country in North Africa, sometimes considered part of the Middle East politically. It is bordered by Egypt to the north, the Red Sea to the northeast, Eritrea and Ethiopia to the east, South Sudan to the south, the Central African Republic to the...
and of Khartoum State
Khartoum (state)
Khartoum is one of the 15 states of Sudan. It has an area of 22,122 km2 and an estimated population of approximately 7,152,102 . Khartoum, the national capital of Sudan, is the capital of the Khartoum State....
. It is located at the confluence of the White Nile
White Nile
The White Nile is a river of Africa, one of the two main tributaries of the Nile from Egypt, the other being the Blue Nile. In the strict meaning, "White Nile" refers to the river formed at Lake No at the confluence of the Bahr al Jabal and Bahr el Ghazal rivers...
flowing north from Lake Victoria
Lake Victoria
Lake Victoria is one of the African Great Lakes. The lake was named for Queen Victoria of the United Kingdom, by John Hanning Speke, the first European to discover this lake....
, and the Blue Nile
Blue Nile
The Blue Nile is a river originating at Lake Tana in Ethiopia. With the White Nile, the river is one of the two major tributaries of the Nile...
flowing west from Ethiopia
Ethiopia
Ethiopia , officially known as the Federal Democratic Republic of Ethiopia, is a country located in the Horn of Africa. It is the second-most populous nation in Africa, with over 82 million inhabitants, and the tenth-largest by area, occupying 1,100,000 km2...
. The location where the two Niles meet is known as "al-Mogran". The main Nile
Nile
The Nile is a major north-flowing river in North Africa, generally regarded as the longest river in the world. It is long. It runs through the ten countries of Sudan, South Sudan, Burundi, Rwanda, Democratic Republic of the Congo, Tanzania, Kenya, Ethiopia, Uganda and Egypt.The Nile has two major...
continues to flow north towards Egypt
Egypt
Egypt , officially the Arab Republic of Egypt, Arabic: , is a country mainly in North Africa, with the Sinai Peninsula forming a land bridge in Southwest Asia. Egypt is thus a transcontinental country, and a major power in Africa, the Mediterranean Basin, the Middle East and the Muslim world...
and the Mediterranean Sea
Mediterranean Sea
The Mediterranean Sea is a sea connected to the Atlantic Ocean surrounded by the Mediterranean region and almost completely enclosed by land: on the north by Anatolia and Europe, on the south by North Africa, and on the east by the Levant...
.

Divided by the Niles, Khartoum is a tripartite metropolis with an estimated overall population of over five million people consisting of Khartoum proper, and linked by bridges to Khartoum North
Khartoum North
Khartoum North is a city close to, but distinct from, Khartoum in central Sudan. The city is close to the confluence of the White and Blue Nile on the eastern bank of the Blue Nile. The city, which had in 1993 a rapidly growing population of 900,000, is connected by bridges to Khartoum and Omdurman...
called (al-Khartūm Bahrī) and Omdurman
Omdurman
Omdurman is the second largest city in Sudan and Khartoum State, lying on the western banks of the River Nile, opposite the capital, Khartoum. Omdurman has a population of 2,395,159 and is the national centre of commerce...
(Umm Durmān) to the west.
The origin of the word is uncertain.