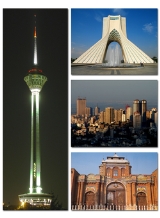 In the 20th century, Tehran was subject to mass-migration of people from all around Iran.

Hi, I am writing a 4000 word essay on the geographics of tehran and how it influences Tehran's high pollution rate causing serious environmental issu...
More

Since when did it gain national prominence?

Is is true that the city's vintage landmarks were destroyed?

Was Tehran established as a town to start with

Was it always the capital of Iran?

Why is Iran such a polluted state?
More

1979    The Ayatollah Khomeini is welcomed back to Tehran, Iran after nearly 15 years of exile.

1979    Iran hostage crisis begins: a group of Iranians, mostly students, invades the US embassy in Tehran and takes 90 hostages (53 of whom are American).

1979    Iran hostage crisis: In response to the hostage situation in Tehran, US President Jimmy Carter orders a halt to all petroleum imports into the United States from Iran.

1979    Iran hostage crisis: Iranian leader Ayatollah Ruhollah Khomeini orders the release of 13 female and black American hostages being held at the US Embassy in Tehran.

1980    The International Court of Justice calls for the release of United States embassy hostages in Tehran, Iran. The hostages would not be freed until the following January.