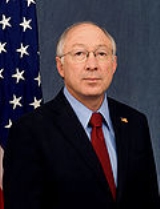 The current Secretary of the Interior in Barack Obama
Barack Obama
Barack Hussein Obama II is the 44th and current President of the United States. He is the first African American to hold the office. Obama previously served as a United States Senator from Illinois, from January 2005 until he resigned following his victory in the 2008 presidential election.Born in...
's administration is former Senator Ken Salazar
Ken Salazar
Kenneth Lee "Ken" Salazar is the current United States Secretary of the Interior, in the administration of President Barack Obama. A member of the Democratic Party, he previously served as a United States Senator from Colorado from 2005 to 2009. He and Mel Martinez were the first Hispanic U.S...
of Colorado
Colorado
Colorado is a U.S. state that encompasses much of the Rocky Mountains as well as the northeastern portion of the Colorado Plateau and the western edge of the Great Plains...
.


Secretaries of the Interior

Living former Secretaries of the Interior