Members of a royal family

A royal family typically includes the spouse of the reigning monarch, surviving spouses of a deceased monarch, the children, grandchildren, brothers, sisters, and cousins of the reigning monarch, as well as their spouses. In some cases, royal family membership may extend to great grandchildren and more distant descendants of a monarch. In certain monarchies where voluntary abdication
Abdication
Abdication occurs when a monarch, such as a king or emperor, renounces his office.-Terminology:The word abdication comes derives from the Latin abdicatio. meaning to disown or renounce...
is the norm, such as the Netherlands
Netherlands
The Netherlands is a constituent country of the Kingdom of the Netherlands, located mainly in North-West Europe and with several islands in the Caribbean. Mainland Netherlands borders the North Sea to the north and west, Belgium to the south, and Germany to the east, and shares maritime borders...
, a royal family may also include one or more former monarchs. There is often a distinction between persons of the blood royal and those that marry into the royal family. In certain instances, such as in Canada, the royal family is defined by who holds the styles Majesty
Majesty
Majesty is an English word derived ultimately from the Latin maiestas, meaning "greatness".- Origin :Originally, during the Roman republic, the word maiestas was the legal term for the supreme status and dignity of the state, to be respected above everything else...
and Royal Highness
Royal Highness
Royal Highness is a style ; plural Royal Highnesses...
. Under most systems, only persons in the first category are dynasts, that is, potential successors to the throne (unless the member of the latter category is also in line to the throne in their own right, a frequent occurrence in royal families which frequently intermarry). This is not always observed; some monarchies have operated by the principle of jure uxoris
Jure uxoris
Jure uxoris is a Latin term that means "by right of his wife" or "in right of a wife". It is commonly used to refer to a title held by a man whose wife holds it in her own right. In other words, he acquired the title simply by being her husband....
. 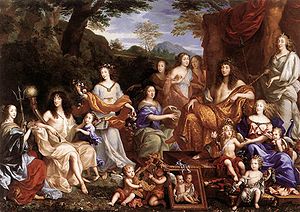 In addition certain relatives of the monarch (by blood or marriage) possess special privileges and are subject to certain statutes, conventions, or special common law. The precise functions of a royal family vary depending on whether the polity in question is an absolute monarchy
Absolute monarchy
Absolute monarchy is a monarchical form of government in which the monarch exercises ultimate governing authority as head of state and head of government, his or her power not being limited by a constitution or by the law. An absolute monarch thus wields unrestricted political power over the...
, a constitutional monarchy
Constitutional monarchy
Constitutional monarchy is a form of government in which a monarch acts as head of state within the parameters of a constitution, whether it be a written, uncodified or blended constitution...
, or somewhere in between. In certain monarchies, such as that found in Saudi Arabia
Saudi Arabia
The Kingdom of Saudi Arabia , commonly known in British English as Saudi Arabia and in Arabic as as-Sa‘ūdiyyah , is the largest state in Western Asia by land area, constituting the bulk of the Arabian Peninsula, and the second-largest in the Arab World...
or Kuwait
Kuwait
The State of Kuwait is a sovereign Arab state situated in the north-east of the Arabian Peninsula in Western Asia. It is bordered by Saudi Arabia to the south at Khafji, and Iraq to the north at Basra. It lies on the north-western shore of the Persian Gulf. The name Kuwait is derived from the...
, or in political systems where the monarch actually exercises executive power, such as in Jordan
Jordan
Jordan , officially the Hashemite Kingdom of Jordan , Al-Mamlaka al-Urduniyya al-Hashemiyya) is a kingdom on the East Bank of the River Jordan. The country borders Saudi Arabia to the east and south-east, Iraq to the north-east, Syria to the north and the West Bank and Israel to the west, sharing...
, it is not uncommon for the members of a royal family to hold important government posts or military commands. In most constitutional monarchies, however, members of a royal family perform certain public, social, or ceremonial functions, but refrain from any involvement in electoral politics or the actual governance of the country.

The specific composition of royal families varies from country to country, as do the titles and royal and noble styles
Royal and noble styles
Styles represent the fashion by which monarchs and noblemen are properly addressed. Throughout history, many different styles were used, with little standardization...
held by members of the family. The composition of the royal family may be regulated by statute enacted by the legislature (e.g. Spain, the Netherlands
Netherlands
The Netherlands is a constituent country of the Kingdom of the Netherlands, located mainly in North-West Europe and with several islands in the Caribbean. Mainland Netherlands borders the North Sea to the north and west, Belgium to the south, and Germany to the east, and shares maritime borders...
, and Japan since 1947), the Sovereign's prerogative and common law tradition (e.g. the United Kingdom), or a private house law (e.g., Liechtenstein
Liechtenstein
The Principality of Liechtenstein is a doubly landlocked alpine country in Central Europe, bordered by Switzerland to the west and south and by Austria to the east. Its area is just over , and it has an estimated population of 35,000. Its capital is Vaduz. The biggest town is Schaan...
, the former ruling houses of Bavaria
Bavaria
Bavaria, formally the Free State of Bavaria is a state of Germany, located in the southeast of Germany. With an area of , it is the largest state by area, forming almost 20% of the total land area of Germany...
, Prussia
Prussia
Prussia was a German kingdom and historic state originating out of the Duchy of Prussia and the Margraviate of Brandenburg. For centuries, the House of Hohenzollern ruled Prussia, successfully expanding its size by way of an unusually well-organized and effective army. Prussia shaped the history...
, Hanover
Hanover
Hanover or Hannover, on the river Leine, is the capital of the federal state of Lower Saxony , Germany and was once by personal union the family seat of the Hanoverian Kings of Great Britain, under their title as the dukes of Brunswick-Lüneburg...
, etc.). Public statutes, constitutional provisions, or conventions may also regulate the marriages, names, and personal titles of royal family members. The members of a royal family may or may not have a surname or dynastic name (see Royal House
Royal House
A royal house or royal dynasty consists of at least one, but usually more monarchs who are related to one another, as well as their non-reigning descendants and spouses. Monarchs of the same realm who are not related to one another are usually deemed to belong to different houses, and each house is...
).

Some countries have abolished
Abolished monarchy
Throughout history, monarchies have been abolished, either through revolutions, legislative reforms, coups d'état, or wars. The twentieth century saw a major acceleration of this process, with many monarchies violently overthrown by revolution or war, or else abolished as part of the process of...
royalty altogether, as in post-revolutionary France and Russia.