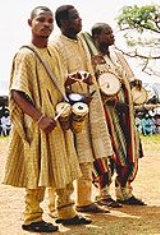 The Yoruba share borders with the Borgu
Borgu
Borgu was a 15th-16th century state in West Africa, partitioned between the Great Britain and France by the Anglo-French Convention of 1898. It lies in what is now Nigeria and the Republic of Benin.People of Borgu were known as Bariba and Borgawa....
(variously called "Baruba" and "Borgawa") in the northwest; the Nupe
Nupe
The Nupe, traditionally called the Tapa by the neighbouring Yoruba, are an ethnic group located primarily in the Middle Belt and northern Nigeria, and are the dominant group in Niger and an important minority in Kwara State.-History:...
(whom they often call "Tapa") and Ebira
Ebira
The Ebira These days Ebira is no more pronounced or spelt "Igbira or Igbirra" because it is considered to be insultive to most of the Ebiras but then, Ebira people are an ethno-linguistic group of Nigeria. Many Ebira people are from Kogi State, Kwara State, Nasarawa State, Federal Capital...
in the north; and the Edo
Edo people
Edo is the name for the place, people and language of an ethnic group in Nigeria. Other Edo-speaking ethnic groups include the Esan and the Afemai...
, the Ẹsan
Esan
Esan is one of the major ethnic groups in Edo State, South-south geopolitical zone of Nigeria.-Name:It is believed by many historians that the name 'Esan' owes its origin to Bini...
, and the Afemai
Afemai
Afenmai or Afemai is an ethnic language of the group of people living in the northern part of Edo State south geopolitical zone of Nigeria....
to the southeast.