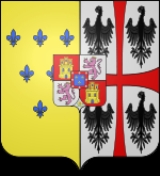 The House of Bourbon-Parma is an Italian
Italy
Italy , officially the Italian Republic languages]] under the European Charter for Regional or Minority Languages. In each of these, Italy's official name is as follows:;;;;;;;;), is a unitary parliamentary republic in South-Central Europe. To the north it borders France, Switzerland, Austria and...
cadet branch of the House of Bourbon
House of Bourbon
The House of Bourbon is a European royal house, a branch of the Capetian dynasty . Bourbon kings first ruled Navarre and France in the 16th century. By the 18th century, members of the Bourbon dynasty also held thrones in Spain, Naples, Sicily, and Parma...
. It is thus descended from the Capetian dynasty
Capetian dynasty
The Capetian dynasty , also known as the House of France, is the largest and oldest European royal house, consisting of the descendants of King Hugh Capet of France in the male line. Hugh Capet himself was a cognatic descendant of the Carolingians and the Merovingians, earlier rulers of France...
in male line. The name of Bourbon-Parma comes from the main name (Bourbon) and the other (Parma) from the title of Duke of Parma.
The title was held by the Spanish Bourbons as the founder was the great-grandson of Duke
Duke
A duke or duchess is a member of the nobility, historically of highest rank below the monarch, and historically controlling a duchy...
Ranuccio II Farnese, Duke of Parma
Ranuccio II Farnese, Duke of Parma
Ranuccio II Farnese was the sixth Duke of Parma and Piacenza from 1646 until his death nearly 50 years later.-Birth and Succession:...
.

The Duchy of Parma was created in 1545 from that part of the Duchy of Milan
Duchy of Milan
The Duchy of Milan , was created on the 1st of may 1395, when Gian Galeazzo Visconti, Lord of Milan, purchased a diploma for 100,000 Florins from King Wenceslaus. It was this diploma that installed, Gian Galeazzo as Duke of Milan and Count of Pavia...
south of the Po River
Po River
The Po |Ligurian]]: Bodincus or Bodencus) is a river that flows either or – considering the length of the Maira, a right bank tributary – eastward across northern Italy, from a spring seeping from a stony hillside at Pian del Re, a flat place at the head of the Val Po under the northwest face...
, as a fief for Pope Paul III
Pope Paul III
Pope Paul III , born Alessandro Farnese, was Pope of the Roman Catholic Church from 1534 to his death in 1549. He came to the papal throne in an era following the sack of Rome in 1527 and rife with uncertainties in the Catholic Church following the Protestant Reformation...
's illegitimate son, Pier Luigi Farnese
Pier Luigi Farnese, Duke of Parma
Pier Luigi Farnese was the first Duke of Parma, Piacenza and Castro, from 1545 to 1547.Born in Rome, Pier Luigi was the illegitimate son of Cardinal Alessandro Farnese...
, centered on the city of Parma
Parma
Parma is a city in the Italian region of Emilia-Romagna famous for its ham, its cheese, its architecture and the fine countryside around it. This is the home of the University of Parma, one of the oldest universities in the world....
.
In 1556, the second Duke, Ottavio Farnese, was given the city of Piacenza
Piacenza
Piacenza is a city and comune in the Emilia-Romagna region of northern Italy. It is the capital of the province of Piacenza...
, becoming thus also Duke of Piacenza, and so the state was thereafter properly known as the Duchies of Parma and Piacenza.

The Farnese family continued to rule until their extinction in 1731, at which point the duchy was inherited by the young son of the King of Spain
Philip V of Spain
Philip V was King of Spain from 15 November 1700 to 15 January 1724, when he abdicated in favor of his son Louis, and from 6 September 1724, when he assumed the throne again upon his son's death, to his death.Before his reign, Philip occupied an exalted place in the royal family of France as a...
, Charles
Charles III of Spain
Charles III was the King of Spain and the Spanish Indies from 1759 to 1788. He was the eldest son of Philip V of Spain and his second wife, the Princess Elisabeth Farnese...
, whose mother Elisabeth was a member of the Farnese family. He ruled until the end of the War of the Polish Succession
War of the Polish Succession
The War of the Polish Succession was a major European war for princes' possessions sparked by a Polish civil war over the succession to Augustus II, King of Poland that other European powers widened in pursuit of their own national interests...
in 1735, when Parma was ceded to Emperor Charles VI
Charles VI, Holy Roman Emperor
Charles VI was the penultimate Habsburg sovereign of the Habsburg Empire. He succeeded his elder brother, Joseph I, as Holy Roman Emperor, King of Bohemia , Hungary and Croatia , Archduke of Austria, etc., in 1711...
in exchange for the Two Sicilies.

The Habsburg
Habsburg
The House of Habsburg , also found as Hapsburg, and also known as House of Austria is one of the most important royal houses of Europe and is best known for being an origin of all of the formally elected Holy Roman Emperors between 1438 and 1740, as well as rulers of the Austrian Empire and...
s only ruled until the conclusion of the Treaty of Aix-la-Chapelle
Treaty of Aix-la-Chapelle (1748)
The Treaty of Aix-la-Chapelle of 1748 ended the War of the Austrian Succession following a congress assembled at the Imperial Free City of Aachen—Aix-la-Chapelle in French—in the west of the Holy Roman Empire, on 24 April 1748...
in 1748, when it was ceded back to the Bourbon
House of Bourbon
The House of Bourbon is a European royal house, a branch of the Capetian dynasty . Bourbon kings first ruled Navarre and France in the 16th century. By the 18th century, members of the Bourbon dynasty also held thrones in Spain, Naples, Sicily, and Parma...
s in the person of Philip
Philip, Duke of Parma
Philip of Spain was Duke of Parma from 1748 to 1765. He founded the House of Bourbon-Parma , a cadet line of the Spanish branch of the dynasty...
, Charles's younger brother. As duke Philip, he became the founder of the House of Bourbon-Parma.

In 1796, the duchy was occupied by French troops under Napoleon Bonaparte. In the Treaty of Aranjuez
Treaty of Aranjuez (1801)
The Treaty of Aranjuez was signed on March 21, 1801 between France and Spain. The overall accord confirmed the terms presented in the Treaty of San Ildefonso. Moreover, Ferdinand, the Bourbon Duke of Parma, agreed to surrender the Duchy of Parma to France. Ferdinand's son Louis received the Grand...
of 1801, duke Ferdinand formally agreed to cede the duchy to Napoleon. The territories were integrated into the Cisalpine Republic
Cisalpine Republic
The Cisalpine Republic was a French client republic in Northern Italy that lasted from 1797 to 1802.-Birth:After the Battle of Lodi in May 1796, Napoleon Bonaparte proceeded to organize two states: one to the south of the Po River, the Cispadane Republic, and one to the north, the Transpadane...
until 1802, the Italian Republic
Italian Republic (Napoleonic)
The Italian Republic was a short-lived republic located in Northern Italy. It was a vassal state of the First French Republic of Napoleon.-The republic:...
, from 1802 until 1805, and the Kingdom of Italy
Kingdom of Italy (Napoleonic)
The Kingdom of Italy was a state founded in Northern Italy by Napoleon, fully influenced by revolutionary France, that ended with his defeat and fall.-Constitutional statutes:...
, from 1805 until 1808, until in 1808 the French Empire
First French Empire
The First French Empire , also known as the Greater French Empire or Napoleonic Empire, was the empire of Napoleon I of France...
annexed them and formed out of them the Département of Taro
Taro (département)
Taro is the name of a département of the First French Empire in present Italy. It was named after the Taro river. It was formed in 1808, when the states of Parma and Piacenza were annexed by France. Its capital was Parma. It was divided into the following arrondissements:* Parma.* Borgo San Donnino...
.

In 1814, the duchies were restored under Napoleon's Habsburg wife, Marie Louise, who was to rule them for her lifetime. The duchy was renamed duchy of Parma, Piacenza and Guastalla, the name that it retained until the end.


Return to the Bourbons

After Marie Louise's death in 1847, the Duchy was restored to the Bourbon-Parma line, which had been ruling the tiny duchy of Lucca
Duchy of Lucca
The Duchy of Lucca was an Italian state existing from 1815 to 1847. It was centered on the city of Lucca.The Duchy was formed in 1815 by the Congress of Vienna, out of the former Republic of Lucca and the Principality of Lucca and Piombino, which had been ruled by Elisa Bonaparte...
. The Bourbons ruled until 1859, when they were driven out by a revolution following the Sardinian victory in their war against Austria.

The duchies of Parma, Piacenza and Guastalla and the duchy of Lucca joined with the Grand Duchy of Tuscany
Grand Duchy of Tuscany
The Grand Duchy of Tuscany was a central Italian monarchy that existed, with interruptions, from 1569 to 1859, replacing the Duchy of Florence. The grand duchy's capital was Florence...
and the duchy of Modena to form the United Provinces of Central Italy
United Provinces of Central Italy
The United Provinces of Central Italy, also known as Union of Central Italy, Confederation of Central Italy or Government General of Central Italy, was a short-lived client state of the Kingdom of Piedmont-Sardinia...
in December 1859, and were annexed to the Kingdom of Sardinia
Kingdom of Sardinia
The Kingdom of Sardinia consisted of the island of Sardinia first as a part of the Crown of Aragon and subsequently the Spanish Empire , and second as a part of the composite state of the House of Savoy . Its capital was originally Cagliari, in the south of the island, and later Turin, on the...
in March of 1860.
The House of Bourbon continues to claim the title of duke of Parma to this day. Carlos-Hugo
Carlos Hugo of Bourbon, Duke of Parma
Carlos Hugo, Duke of Parma and Piacenza was the head of the House of Bourbon-Parma from 1977 until his death...
(Carlist pretender
Pretender
A pretender is one who claims entitlement to an unavailable position of honour or rank. Most often it refers to a former monarch, or descendant thereof, whose throne is occupied or claimed by a rival, or has been abolished....
to the Spanish throne in the 1970s) has held the title since 1977.

During the French ownership of the Duchy of Parma, the title of Duke of Parma was used as an honorary form and style. From 1808, the title was used by Jean Jacques Régis de Cambacérès
Jean Jacques Régis de Cambacérès
Jean-Jacques-Régis de Cambacérès, 1st Duke of Parma was a French lawyer and statesman during the French Revolution and the First Empire, best remembered as the author of the Napoleonic code, which still forms the basis of French civil law.-Early career:Cambacérès was born in Montpellier, into a...
. He kept the style of Duc de Parme till 1814. Only in 1847 the actual title was restored to the Bourbons after a period of being held by Marie Louise of Austria
Marie Louise, Duchess of Parma
Marie Louise of Austria was the second wife of Napoleon I, Emperor of the French and later Duchess of Parma...
, wife of Napoleon I who was a Habsburg
Habsburg
The House of Habsburg , also found as Hapsburg, and also known as House of Austria is one of the most important royal houses of Europe and is best known for being an origin of all of the formally elected Holy Roman Emperors between 1438 and 1740, as well as rulers of the Austrian Empire and...
.