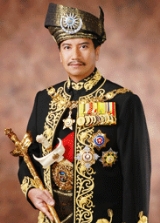 A literal English translation of the title is "He who is made Lord". However, common alternatives are "King", "Supreme Ruler", "Paramount Ruler", or "Supreme Head of State".
x