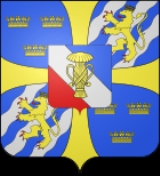 Encyclopedia
The House of Vasa was the Royal House
Royal House
A royal house or royal dynasty consists of at least one, but usually more monarchs who are related to one another, as well as their non-reigning descendants and spouses. Monarchs of the same realm who are not related to one another are usually deemed to belong to different houses, and each house is...
of Sweden
Sweden
Sweden , officially the Kingdom of Sweden , is a Nordic country on the Scandinavian Peninsula in Northern Europe. Sweden borders with Norway and Finland and is connected to Denmark by a bridge-tunnel across the Öresund....
1523-1654 and of Poland
Poland
Poland , officially the Republic of Poland , is a country in Central Europe bordered by Germany to the west; the Czech Republic and Slovakia to the south; Ukraine, Belarus and Lithuania to the east; and the Baltic Sea and Kaliningrad Oblast, a Russian exclave, to the north...
1587-1668. It originated from a noble family in Uppland
Uppland
Uppland is a historical province or landskap on the eastern coast of Sweden, just north of Stockholm, the capital. It borders Södermanland, Västmanland and Gästrikland. It is also bounded by lake Mälaren and the Baltic sea...
of which several members had high offices during the 15th century.


Kings and Queens of Sweden

In 1654 Christina, the daughter of Gustavus Adolphus, the Protestant Champion of the Thirty Years' War
Thirty Years' War
The Thirty Years' War was fought primarily in what is now Germany, and at various points involved most countries in Europe. It was one of the most destructive conflicts in European history....
, abdicated, converted to Catholicism
Roman Catholic Church
The Catholic Church, also known as the Roman Catholic Church, is the world's largest Christian church, with over a billion members. Led by the Pope, it defines its mission as spreading the gospel of Jesus Christ, administering the sacraments and exercising charity...
and left the country. The throne passed to her half-cousin Charles X of the House of Palatinate-Zweibrücken
House of Palatinate-Zweibrücken
The House of Palatinate-Zweibrücken, a branch of the Wittelsbach dynasty, was the Royal House of Sweden from 1654 to 1720.By this point it had splintered into several different houses...
, a cadet
Cadet
A cadet is a trainee to become an officer in the military, often a person who is a junior trainee. The term comes from the term "cadet" for younger sons of a noble family.- Military context :...
branch of the Wittelsbach
Wittelsbach
The Wittelsbach family is a European royal family and a German dynasty from Bavaria.Members of the family served as Dukes, Electors and Kings of Bavaria , Counts Palatine of the Rhine , Margraves of Brandenburg , Counts of Holland, Hainaut and Zeeland , Elector-Archbishops of Cologne , Dukes of...
s.

The kings of the house of Holstein-Gottorp, which produced the kings of Sweden from 1751 to 1818, emphasized their Vasa descent through a female line. The current ruling house of Bernadotte
Bernadotte
The House of Bernadotte, the current royal house of Sweden, has reigned since 1818. Between 1818 and 1905, it was also the royal house of the Norway...
similarly claims a Vasa mantle: Charles XIV
Charles XIV John of Sweden
Charles XIV & III John, also Carl John, Swedish and Norwegian: Karl Johan was King of Sweden and King of Norway from 1818 until his death...
was an adopted son of Charles XIII
Charles XIII of Sweden
Charles XIII & II also Carl, , was King of Sweden from 1809 and King of Norway from 1814 until his death...
; his son Oscar I
Oscar I of Sweden
Oscar I was King of Sweden and Norway from 1844 to his death. When, in August 1810, his father Jean-Baptiste Bernadotte was elected Crown Prince of Sweden, Oscar and his mother moved from Paris to Stockholm . Oscar's father was the first ruler of the current House of Bernadotte...
married a Vasa descendant Josephine of Leuchtenberg
Josephine of Leuchtenberg
Joséphine of Leuchtenberg was Queen consort of Sweden and Norway as the wife of King Oscar I...
; their grandson Gustav V married Victoria of Baden
Victoria of Baden
Victoria of Baden was a Queen consort of Sweden by her marriage to King Gustaf V of Sweden. She was politically active in a conservative fashion during the development of democracy and known as a pro-German during the First World War.-Birth:Princess Viktoria was born on 7 August 1862 at the castle...
who was a great-grandchild of Gustav IV Adolf of the house Holstein-Gottorp.


Kings of Poland and Grand Dukes of Lithuania

John III of Sweden married Catherine Jagellonka, the sister of Sigismund II Augustus of Poland
Sigismund II Augustus
Sigismund II Augustus I was King of Poland and Grand Duke of Lithuania, the only son of Sigismund I the Old, whom Sigismund II succeeded in 1548...
. When Sigismund II of Poland died without issue, the son of John III of Sweden and Catherine Jagellonka was elected King of Poland and Grand Duke of Lithuania as Sigismund III in 1587. On John's death Sigismund also gained the Swedish throne.
Sigismund was Catholic
Roman Catholic Church
The Catholic Church, also known as the Roman Catholic Church, is the world's largest Christian church, with over a billion members. Led by the Pope, it defines its mission as spreading the gospel of Jesus Christ, administering the sacraments and exercising charity...
however, which ultimately led to his losing the throne in Sweden. His uncle Charles IX
Charles IX of Sweden
Charles IX of Sweden also Carl, was King of Sweden from 1604 until his death. He was the youngest son of King Gustav I of Sweden and his second wife, Margaret Leijonhufvud, brother of Eric XIV and John III of Sweden, and uncle of Sigismund III Vasa king of both Sweden and Poland...
succeeded him. We thus have two Houses of Vasa from this point onwards: the senior, Catholic branch ruling in Poland, and the cadet, Protestant branch ruling in Sweden. This arrangement led to numerous wars between the two states. After John, the Polish Vasa died out. See also Rulers of Poland.