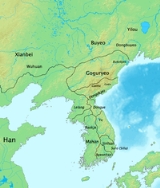 Overview
Goguryeo or Koguryŏ was an ancient Korean kingdom located in present day northern and central parts of the Korean Peninsula
Korean Peninsula
The Korean Peninsula is a peninsula in East Asia. It extends southwards for about 684 miles from continental Asia into the Pacific Ocean and is surrounded by the Sea of Japan to the south, and the Yellow Sea to the west, the Korea Strait connecting the first two bodies of water.Until the end of...
, southern Manchuria
Manchuria
Manchuria is a historical name given to a large geographic region in northeast Asia. Depending on the definition of its extent, Manchuria usually falls entirely within the People's Republic of China, or is sometimes divided between China and Russia. The region is commonly referred to as Northeast...
, and southern Russian Maritime province
Primorsky Krai
Primorsky Krai , informally known as Primorye , is a federal subject of Russia . Primorsky means "maritime" in Russian, hence the region is sometimes referred to as Maritime Province or Maritime Territory. Its administrative center is in the city of Vladivostok...
.

The Samguk Sagi
Samguk Sagi
Samguk Sagi is a historical record of the Three Kingdoms of Korea: Goguryeo, Baekje and Silla. The Samguk Sagi is written in Classical Chinese and its compilation was ordered by Goryeo's King Injong Samguk Sagi (History of the Three Kingdoms) is a historical record of the Three Kingdoms of...
, a 12th century CE Goryeo
Goryeo
The Goryeo Dynasty or Koryŏ was a Korean dynasty established in 918 by Emperor Taejo. Korea gets its name from this kingdom which came to be pronounced Korea. It united the Later Three Kingdoms in 936 and ruled most of the Korean peninsula until it was removed by the Joseon dynasty in 1392...
text, indicates that Goguryeo was founded in 37 BC
Anno Domini
and Before Christ are designations used to label or number years used with the Julian and Gregorian calendars....
by Jumong, a prince from Buyeo
Buyeo (state)
Buyeo or Puyŏ , Fuyu in Chinese, was an ancient Korean kingdom located from today's Manchuria to northern North Korea, from around the 2nd century BC to 494. Its remnants were absorbed by the neighboring and brotherhood kingdom of Goguryeo in 494...
, although there is archaeological and textual evidence that suggests Goguryeo culture was in existence since the 2nd century BCE around the fall of Gojoseon
Gojoseon
Gojoseon was an ancient Korean kingdom. Go , meaning "ancient," distinguishes it from the later Joseon Dynasty; Joseon, as it is called in contemporaneous writings, is also romanized as Chosŏn....
, an earlier kingdom that also occupied southern Manchuria and northern Korea.

Goguryeo was a major dynasty in Northeast Asia
Northeast Asia
Northeast Asia and Northeastern Asia refers to the northeastern subregion of Asia. Though the precise definition of Northeast Asia changes according to context, it always includes Japan and the Korean Peninsula, and is sometimes used to refer to these two regions exclusively.-Definitions:The...
, until it was defeated by a Silla
Silla
Silla was one of the Three Kingdoms of Korea, and one of the longest sustained dynasties in...
-Tang
Tang Dynasty
The Tang Dynasty was an imperial dynasty of China preceded by the Sui Dynasty and followed by the Five Dynasties and Ten Kingdoms Period. It was founded by the Li family, who seized power during the decline and collapse of the Sui Empire...
alliance in 668 CE.