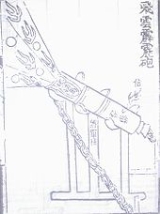 Overview
The Ming Dynasty, also Empire of the Great Ming, was the ruling dynasty
Dynasties in Chinese history
The following is a chronology of the dynasties in Chinese history.Chinese history is not as neat as is often described and it was rare for one dynasty to change peacefully into the next. Dynasties were often established before the overthrow of an existing regime, or continued for a time after they...
of China
China
Chinese civilization may refer to:* China for more general discussion of the country.* Chinese culture* Greater China, the transnational community of ethnic Chinese.* History of China* Sinosphere, the area historically affected by Chinese culture...
from 1368 to 1644, following the collapse of the Mongol
Mongol Empire
The Mongol Empire , initially named as Greater Mongol State was a great empire during the 13th and 14th centuries...
-led Yuan Dynasty
Yuan Dynasty
The Yuan Dynasty , or Great Yuan Empire was a ruling dynasty founded by the Mongol leader Kublai Khan, who ruled most of present-day China, all of modern Mongolia and its surrounding areas, lasting officially from 1271 to 1368. It is considered both as a division of the Mongol Empire and as an...
. The Ming, "one of the greatest eras of orderly government and social stability in human history", was the last dynasty in China ruled by ethnic Han Chinese
Han Chinese
Han Chinese are an ethnic group native to China and are the largest single ethnic group in the world.Han Chinese constitute about 92% of the population of the People's Republic of China , 98% of the population of the Republic of China , 78% of the population of Singapore, and about 20% of the...
. Although the Ming capital Beijing
Beijing
Beijing , also known as Peking , is the capital of the People's Republic of China and one of the most populous cities in the world, with a population of 19,612,368 as of 2010. The city is the country's political, cultural, and educational center, and home to the headquarters for most of China's...
fell in 1644 to a rebellion led by Li Zicheng (who established the Shun Dynasty
Shun Dynasty
The Shun Dynasty was an imperial dynasty created in the brief lapse from Ming to Qing rule in China. The dynasty was founded in Xi'an on 8 February 1644, the first day of the lunar year, by Li Zicheng, the leader of a large peasant rebellion. Li, however, only went by the title of King, not Emperor...
, soon replaced by the Manchu-led Qing Dynasty
Qing Dynasty
The Qing Dynasty was the last dynasty of China, ruling from 1644 to 1912 with a brief, abortive restoration in 1917. It was preceded by the Ming Dynasty and followed by the Republic of China....
), regimes loyal to the Ming throne — collectively called the Southern Ming
Southern Ming Dynasty
The Southern Ming Dynasty was the Ming loyalist regime that continued in Southern China from 1644 to 1662 following the capture of Beijing by rebel armies and the death of the last Ming emperor in 1644....
— survived until 1662.

Ming rule saw the construction of a vast navy
Naval history of China
The naval history of China dates back thousands of years, with archives existing since the late Spring and Autumn Period about the ancient navy of China and the various ship types used in war. China was leading maritime power in the years 1405-1433, when Chinese shipbuilders began to build massive...
and a standing army
Standing army
A standing army is a professional permanent army. It is composed of full-time career soldiers and is not disbanded during times of peace. It differs from army reserves, who are activated only during wars or natural disasters...
of one million troops.

What are the various mega projects that were built during the Ming Dynasty's rule?

Who initiated the fall of the Ming Empire?

Is it true that the Ming Dynasty has armed forces of a million?

Did the Chinese Calendar system adopted work at the time for them to repair it during the rule of the dynasty?

Did the economic plans of the Ming Dynasty backfire over time?
More
x