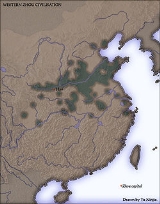 Overview
The Zhou Dynasty ( tʂóʊ tʂʰɑ̌ʊ) was a Chinese dynasty
Dynasties in Chinese history
The following is a chronology of the dynasties in Chinese history.Chinese history is not as neat as is often described and it was rare for one dynasty to change peacefully into the next. Dynasties were often established before the overthrow of an existing regime, or continued for a time after they...
that followed the Shang Dynasty
Shang Dynasty
The Shang Dynasty or Yin Dynasty was, according to traditional sources, the second Chinese dynasty, after the Xia. They ruled in the northeastern regions of the area known as "China proper" in the Yellow River valley...
and preceded the Qin Dynasty
Qin Dynasty
The Qin Dynasty was the first imperial dynasty of China, lasting from 221 to 207 BC. The Qin state derived its name from its heartland of Qin, in modern-day Shaanxi. The strength of the Qin state was greatly increased by the legalist reforms of Shang Yang in the 4th century BC, during the Warring...
. Although the Zhou Dynasty lasted longer than any other dynasty in Chinese history
History of China
Chinese civilization originated in various regional centers along both the Yellow River and the Yangtze River valleys in the Neolithic era, but the Yellow River is said to be the Cradle of Chinese Civilization. With thousands of years of continuous history, China is one of the world's oldest...
, the actual political and military control of China
China
Chinese civilization may refer to:* China for more general discussion of the country.* Chinese culture* Greater China, the transnational community of ethnic Chinese.* History of China* Sinosphere, the area historically affected by Chinese culture...
by the Ji
Ji (surname)
姬=Ji is the family name of the family in control of the Zhou Dynasty , which followed the Shang Dynasty and preceded the Qin Dynasty in China.Thirty-nine members of the family ruled over China during this period.Ji has...
family lasted only until 771 BC, a period known as the Western Zhou.

During the Zhou Dynasty, the use of iron
Iron Age China
The Iron Age in Ancient China began in ca. 600 BC . Ancient China is taken to last until the beginning of Early Imperial China and the rise of the Qin Dynasty in the 3rd century BC...
was introduced to China, though this period of Chinese history produced what many consider the zenith of Chinese bronze
Bronze
Bronze is a metal alloy consisting primarily of copper, usually with tin as the main additive. It is hard and brittle, and it was particularly significant in antiquity, so much so that the Bronze Age was named after the metal...
-ware making.