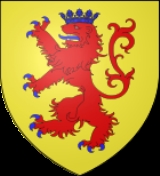 Overview
The House of Habsburg (ˈhæps.bɝːɡ, ˈhaːps.bʊʁk), also found as Hapsburg, and also known as House of Austria is one of the most important royal house
Royal House
A royal house or royal dynasty consists of at least one, but usually more monarchs who are related to one another, as well as their non-reigning descendants and spouses. Monarchs of the same realm who are not related to one another are usually deemed to belong to different houses, and each house is...
s of Europe
Europe
Europe is, by convention, one of the world's seven continents. Comprising the westernmost peninsula of Eurasia, Europe is generally 'divided' from Asia to its east by the watershed divides of the Ural and Caucasus Mountains, the Ural River, the Caspian and Black Seas, and the waterways connecting...
and is best known for being an origin of all of the formally elected Holy Roman Emperor
Holy Roman Emperor
The Holy Roman Emperor is a term used by historians to denote a medieval ruler who, as German King, had also received the title of "Emperor of the Romans" from the Pope...
s between 1438 and 1740, as well as rulers of the Austrian Empire
Austrian Empire
The Austrian Empire was a modern era successor empire, which was centered on what is today's Austria and which officially lasted from 1804 to 1867. It was followed by the Empire of Austria-Hungary, whose proclamation was a diplomatic move that elevated Hungary's status within the Austrian Empire...
and Spanish Empire
Spanish Empire
The Spanish Empire comprised territories and colonies administered directly by Spain in Europe, in America, Africa, Asia and Oceania. It originated during the Age of Exploration and was therefore one of the first global empires. At the time of Habsburgs, Spain reached the peak of its world power....
and several other countries.

The House takes its name from Habsburg Castle
Habsburg castle
Habsburg Castle is a medieval fortress located in Habsburg, Switzerland in the canton of Aargau, near the Aar River. At the time of its construction, the location was part of the Duchy of Swabia. Habsburg Castle is the originating seat of the House of Habsburg, which became one of the leading...
, a fortress built around 1020–1030 in present day Switzerland
Switzerland
Switzerland name of one of the Swiss cantons. ; ; ; or ), in its full name the Swiss Confederation , is a federal republic consisting of 26 cantons, with Bern as the seat of the federal authorities. The country is situated in Western Europe,Or Central Europe depending on the definition....
by Count Radbot
Radbot, Count of Habsburg
Radbot, Count of Habsburg , also known as Radbot of Klettgau, was Graf of the county of Klettgau on the High Rhine in Swabia....
of Klettgau
Klettgau
Klettgau is a group of towns in the district of Waldshut in Baden-Württemberg in Germany. Landgraviat of Klettgau to 1812.There is a border crossing into Switzerland at Erzingen to Trasadingen in Schaffhausen canton....
, who chose to name his fortress Habsburg.

1713    With no living male heirs, Charles VI, Holy Roman Emperor, issues the Pragmatic Sanction of 1713 to ensure that Habsburg lands and the Austrian throne would be inherited by his daughter, Maria Theresa of Austria (not actually born until 1717).

1786    Peter Leopold Joseph of Habsburg-Lorraine, Grand Duke of Tuscany, promulgates a penal reform making his country the first state to abolish the death penalty. Consequently, November 30 is commemorated by 300 cities around the world as Cities for Life Day.

1848    A revolution breaks out in Hungary. The Habsburg rulers are compelled to meet the demands of the Reform party.