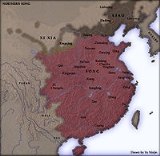 Overview
The Song Dynasty was a ruling dynasty
Dynasties in Chinese history
The following is a chronology of the dynasties in Chinese history.Chinese history is not as neat as is often described and it was rare for one dynasty to change peacefully into the next. Dynasties were often established before the overthrow of an existing regime, or continued for a time after they...
in China
China
Chinese civilization may refer to:* China for more general discussion of the country.* Chinese culture* Greater China, the transnational community of ethnic Chinese.* History of China* Sinosphere, the area historically affected by Chinese culture...
between 960 and 1279; it succeeded the Five Dynasties and Ten Kingdoms Period
Five Dynasties and Ten Kingdoms Period
Five Dynasties and Ten Kingdoms was between 907–960/979 AD and an era of political upheaval in China, between the fall of the Tang Dynasty and the founding of the Song Dynasty. During this period, five dynasties quickly succeeded one another in the north, and more than 12 independent states were...
, and was followed by the Yuan Dynasty
Yuan Dynasty
The Yuan Dynasty , or Great Yuan Empire was a ruling dynasty founded by the Mongol leader Kublai Khan, who ruled most of present-day China, all of modern Mongolia and its surrounding areas, lasting officially from 1271 to 1368. It is considered both as a division of the Mongol Empire and as an...
. It was the first government in world history to issue banknote
Banknote
A banknote is a kind of negotiable instrument, a promissory note made by a bank payable to the bearer on demand, used as money, and in many jurisdictions is legal tender. In addition to coins, banknotes make up the cash or bearer forms of all modern fiat money...
s or paper money, and the first Chinese government to establish a permanent standing navy
Naval history of China
The naval history of China dates back thousands of years, with archives existing since the late Spring and Autumn Period about the ancient navy of China and the various ship types used in war. China was leading maritime power in the years 1405-1433, when Chinese shipbuilders began to build massive...
. This dynasty also saw the first known use of gunpowder
Gunpowder
Gunpowder, also known since in the late 19th century as black powder, was the first chemical explosive and the only one known until the mid 1800s. It is a mixture of sulfur, charcoal, and potassium nitrate - with the sulfur and charcoal acting as fuels, while the saltpeter works as an oxidizer...
, as well as first discernment of true north
True north
True north is the direction along the earth's surface towards the geographic North Pole.True geodetic north usually differs from magnetic north , and from grid north...
using a compass
Compass
A compass is a navigational instrument that shows directions in a frame of reference that is stationary relative to the surface of the earth. The frame of reference defines the four cardinal directions – north, south, east, and west. Intermediate directions are also defined...
.

The Song Dynasty is divided into two distinct periods: the Northern Song and Southern Song.

960    The coronation of Zhao Kuangyin as Emperor Taizu of Song, initiating the Song Dynasty period of China that would last more than three centuries.

971    In China, the war elephant corps of the Southern Han are soundly defeated at Shao by crossbow fire from Song Dynasty troops.

1054    A supernova is observed by the Chinese, the Arabs and possibly Amerindians near the star Tauri. For several months it remains bright enough to be seen during the day. Its remnants form the Crab Nebula.

1276    While taking exile in Fuzhou in southern China, away from the advancing Mongol invaders, the remnants of the Song Dynasty court hold the coronation ceremony for the young prince Zhao Shi, making him Emperor Duanzong of Song.

1279    A Mongolian victory in the Battle of Yamen ends the Song Dynasty in China.