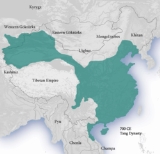 Overview
The Tang Dynasty (June 18, 618 – June 1, 907) was an imperial dynasty of China
Dynasties in Chinese history
The following is a chronology of the dynasties in Chinese history.Chinese history is not as neat as is often described and it was rare for one dynasty to change peacefully into the next. Dynasties were often established before the overthrow of an existing regime, or continued for a time after they...
preceded by the Sui Dynasty
Sui Dynasty
The Sui Dynasty was a powerful, but short-lived Imperial Chinese dynasty. Preceded by the Southern and Northern Dynasties, it ended nearly four centuries of division between rival regimes. It was followed by the Tang Dynasty....
and followed by the Five Dynasties and Ten Kingdoms Period
Five Dynasties and Ten Kingdoms Period
Five Dynasties and Ten Kingdoms was between 907–960/979 AD and an era of political upheaval in China, between the fall of the Tang Dynasty and the founding of the Song Dynasty. During this period, five dynasties quickly succeeded one another in the north, and more than 12 independent states were...
. It was founded by the Li (李) family, who seized power during the decline and collapse of the Sui Empire. The dynasty was interrupted briefly by the Second Zhou Dynasty (October 8, 690 – March 3, 705) when Empress Wu Zetian
Wu Zetian
Wu Zetian , personal name Wu Zhao , often referred to as Tian Hou during the Tang Dynasty and Empress Consort Wu in later times, was the only woman in the history of China to assume the title of Empress Regnant...
seized the throne, becoming the first and only Chinese empress regnant
Queen regnant
A queen regnant is a female monarch who reigns in her own right, in contrast to a queen consort, who is the wife of a reigning king. An empress regnant is a female monarch who reigns in her own right over an empire....
, ruling in her own right.

The Tang Dynasty, with its capital at Chang'an
Chang'an
Chang'an is an ancient capital of more than ten dynasties in Chinese history, today known as Xi'an. Chang'an literally means "Perpetual Peace" in Classical Chinese. During the short-lived Xin Dynasty, the city was renamed "Constant Peace" ; yet after its fall in AD 23, the old name was restored...
(present-day Xi'an
Xi'an
Xi'an is the capital of the Shaanxi province, and a sub-provincial city in the People's Republic of China. One of the oldest cities in China, with more than 3,100 years of history, the city was known as Chang'an before the Ming Dynasty...
), the most populous city in the world at the time, is generally regarded as a high point in Chinese civilization—equal to, or surpassing that of, the earlier Han Dynasty
Han Dynasty
The Han Dynasty was the second imperial dynasty of China, preceded by the Qin Dynasty and succeeded by the Three Kingdoms . It was founded by the rebel leader Liu Bang, known posthumously as Emperor Gaozu of Han. It was briefly interrupted by the Xin Dynasty of the former regent Wang Mang...
—a golden age of cosmopolitan culture.

what was the tang dynasty government symbol?

what was the tang dynasty symbol?
More

What are the most important inventions in Tang and Song dynasties? effects

What were the technologies and inventions that were invented during the Tang Era?

What was the law of the land?

How were administrative officers selected during the Tang Dynasty rule?

Is the Tang Era the greatest age for Chinese poetry?

Is it true that the government washed their hands off the economy?
More

626    Li Shimin, posthumously known as Emperor Taizong of Tang, assumes the throne over the Tang Dynasty of China.

755    An Lushan revolts against Chancellor Yang Guozhong at Fanyang, initiating the An Shi Rebellion during the Tang Dynasty of China.

762    During An Shi Rebellion, Tang Dynasty, with the help of Huihe tribe, recaptured Luoyang from the rebels.