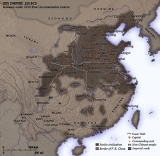 Overview
The Qin Dynasty was the first imperial dynasty
Dynasties in Chinese history
The following is a chronology of the dynasties in Chinese history.Chinese history is not as neat as is often described and it was rare for one dynasty to change peacefully into the next. Dynasties were often established before the overthrow of an existing regime, or continued for a time after they...
of China
China
Chinese civilization may refer to:* China for more general discussion of the country.* Chinese culture* Greater China, the transnational community of ethnic Chinese.* History of China* Sinosphere, the area historically affected by Chinese culture...
, lasting from 221 to 207 BC. The Qin state
Qin (state)
The State of Qin was a Chinese feudal state that existed during the Spring and Autumn and Warring States Periods of Chinese history...
derived its name from its heartland of Qin, in modern-day Shaanxi
Shaanxi
' is a province in the central part of Mainland China, and it includes portions of the Loess Plateau on the middle reaches of the Yellow River in addition to the Qinling Mountains across the southern part of this province...
. The strength of the Qin state was greatly increased by the legalist
Legalism
Legalism may refer to:In philosophy:* Legalism , Chinese political philosophy based on the idea that a highly efficient and powerful government is the key to social order....
reforms of Shang Yang
Shang Yang
Shang Yang was an important statesman of the State of Qin during the Warring States Period of Chinese history. Born Wei Yang in the State of Wei, with the support of Duke Xiao of Qin Yang enacted numerous reforms in Qin...
in the 4th century BC, during the Warring States Period
Warring States Period
The Warring States Period , also known as the Era of Warring States, or the Warring Kingdoms period, covers the Iron Age period from about 475 BC to the reunification of China under the Qin Dynasty in 221 BC...
. In the mid and late third century BC, the Qin accomplished a series of swift conquests, first ending the powerless Zhou Dynasty
Zhou Dynasty
The Zhou Dynasty was a Chinese dynasty that followed the Shang Dynasty and preceded the Qin Dynasty. Although the Zhou Dynasty lasted longer than any other dynasty in Chinese history, the actual political and military control of China by the Ji family lasted only until 771 BC, a period known as...
, and eventually destroying the remaining six states of the major states
Seven Warring States
The Seven Warring States or Seven Kingdoms refers to the seven warring states in China during the Warring States period of Chinese history...
to gain control over the whole of China, resulting in an unified China.

During its reign over China, the Qin Dynasty achieved increased trade, improved agriculture, and military security.

Who are the rulers of the Qin Dynasty?