Encyclopedia
The Prince of Asturias Awards are a series of annual prizes awarded in Spain
Spain
Spain , officially the Kingdom of Spain languages]] under the European Charter for Regional or Minority Languages. In each of these, Spain's official name is as follows:;;;;;;), is a country and member state of the European Union located in southwestern Europe on the Iberian Peninsula...
by the Prince of Asturias Foundation to individuals, entities or organizations from around the world who make notable achievements in the sciences, humanities, and public affairs. 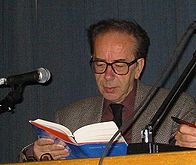