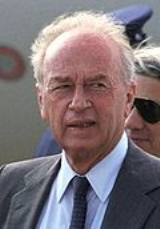 In 1994, Rabin won the Nobel Peace Prize
Nobel Peace Prize
The Nobel Peace Prize is one of the five Nobel Prizes bequeathed by the Swedish industrialist and inventor Alfred Nobel.-Background:According to Nobel's will, the Peace Prize shall be awarded to the person who...
together with Shimon Peres
Shimon Peres
GCMG is the ninth President of the State of Israel. Peres served twice as the eighth Prime Minister of Israel and once as Interim Prime Minister, and has been a member of 12 cabinets in a political career spanning over 66 years...
and Yasser Arafat
Yasser Arafat
Mohammed Yasser Abdel Rahman Abdel Raouf Arafat al-Qudwa al-Husseini , popularly known as Yasser Arafat or by his kunya Abu Ammar , was a Palestinian leader and a Laureate of the Nobel Prize. He was Chairman of the Palestine Liberation Organization , President of the Palestinian National Authority...
. He was assassinated
Assassination of Yitzhak Rabin
The assassination of Yitzhak Rabin took place on November 4, 1995 at 21:30, at the end of a rally in support of the Oslo Accords at the Kings of Israel Square in Tel Aviv...
by right-wing Israeli radical Yigal Amir
Yigal Amir
Yigal Amir is the Israeli assassin of Prime Minister of Israel Yitzhak Rabin. The assassination took place on November 4, 1995 at the conclusion of a rally in Tel Aviv. Amir is currently serving a life sentence for murder plus six years for injuring Rabin's bodyguard, Yoram Rubin, under...
, who was opposed to Rabin's signing of the Oslo Accords
Oslo Accords
The Oslo Accords, officially called the Declaration of Principles on Interim Self-Government Arrangements or Declaration of Principles , was an attempt to resolve the ongoing Palestinian-Israeli conflict...
.