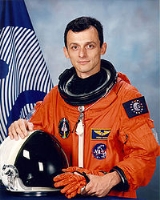 Encyclopedia
Pedro Duque Duque is a Spanish
Spain
Spain , officially the Kingdom of Spain languages]] under the European Charter for Regional or Minority Languages. In each of these, Spain's official name is as follows:;;;;;;), is a country and member state of the European Union located in southwestern Europe on the Iberian Peninsula...
astronaut
Astronaut
An astronaut or cosmonaut is a person trained by a human spaceflight program to command, pilot, or serve as a crew member of a spacecraft....
and a veteran of two space missions.

Duque earned a degree in Aeronautical Engineering from the Universidad Politécnica de Madrid (UPM) in 1986. He worked for GMV
GMV, S.A.
GMV, founded in 1984, is a privately owned corporate group with international presence. It has more than 1000 employees.- Areas of Activity :GMV operates mainly in the following sectors:* Aeronautics* Space* Defense* Health* Security* Transport...
and for the European Space Agency
European Space Agency
The European Space Agency , established in 1975, is an intergovernmental organisation dedicated to the exploration of space, currently with 18 member states...
(ESA) for six years before being selected as an astronaut candidate in 1992. Duque underwent training in both Russia
Russia
Russia or , officially known as both Russia and the Russian Federation , is a country in northern Eurasia. It is a federal semi-presidential republic, comprising 83 federal subjects...
and the United States
United States
The United States of America is a federal constitutional republic comprising fifty states and a federal district...
. His first spaceflight was as a mission specialist aboard space shuttle
Space Shuttle
The Space Shuttle was a manned orbital rocket and spacecraft system operated by NASA on 135 missions from 1981 to 2011. The system combined rocket launch, orbital spacecraft, and re-entry spaceplane with modular add-ons...
mission STS-95
STS-95
STS-95 was a Space Shuttle Discovery mission launched from Kennedy Space Center, Florida on 29 October 1998. It was the 25th flight of Discovery and the 92nd mission flown since the start of the Space Shuttle program in April 1981. It was a highly publicized mission due to former Project Mercury...
, during which Duque supervised ESA experimental modules. In October 2003, Duque visited the International Space Station
International Space Station
The International Space Station is a habitable, artificial satellite in low Earth orbit. The ISS follows the Salyut, Almaz, Cosmos, Skylab, and Mir space stations, as the 11th space station launched, not including the Genesis I and II prototypes...
for several days during a crew changeover. The scientific program of this visit was called by ESA/Spain Misión Cervantes.

He worked at the UPM, in the , and he is currently working at Deimos Imaging.