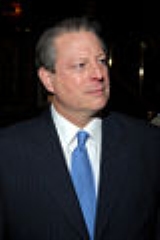 Gore is currently an author and environmental
Environmentalism
Environmentalism is a broad philosophy, ideology and social movement regarding concerns for environmental conservation and improvement of the health of the environment, particularly as the measure for this health seeks to incorporate the concerns of non-human elements...
activist.

The day I made that statement, I was tired because I had been up all night inventing the Camcorder.

Joking about reports that he had claimed to have invented the internet, as quoted in The Boston Globe (9 April 1999)

I have ridden the mighty moon-worm!

American troops and American taxpayers are shouldering a huge burden with no end in sight because Mr. Bush took us to war on false premises and with no plan to win the peace.