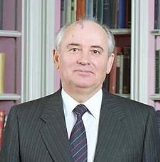 Gorbachev was born in Stavropol Krai
Stavropol Krai
Stavropol Krai is a federal subject of Russia . Its administrative center is the city of Stavropol. Population: -Geography:Stavropol Krai encompasses the central part of the Fore-Caucasus and most of the northern slopes of Caucasus Major...
into a peasant Ukrainian
Ukrainians
Ukrainians are an East Slavic ethnic group native to Ukraine, which is the sixth-largest nation in Europe. The Constitution of Ukraine applies the term 'Ukrainians' to all its citizens...
-Russian
Russians
The Russian people are an East Slavic ethnic group native to Russia, speaking the Russian language and primarily living in Russia and neighboring countries....
family, and in his teens operated combine harvester
Combine harvester
The combine harvester, or simply combine, is a machine that harvests grain crops. The name derives from the fact that it combines three separate operations, reaping, threshing, and winnowing, into a single process. Among the crops harvested with a combine are wheat, oats, rye, barley, corn ,...
s on collective farms. He graduated from Moscow State University
Moscow State University
Lomonosov Moscow State University , previously known as Lomonosov University or MSU , is the largest university in Russia. Founded in 1755, it also claims to be one of the oldest university in Russia and to have the tallest educational building in the world. Its current rector is Viktor Sadovnichiy...
in 1955 with a degree in law.

What prompted the move to make him leader of the Communist Party?

Did the communist rule during his early days inspire him to join the Communist Movement?

When did Mikhail Gorbachev start working for the communist administration?

Was it Mikhail Gorbachev who started the USSR on the route to its split?
More

1985    Soviet leader Mikhail Gorbachev declares a moratorium on the deployment of middle-range missiles in Europe.

1986    Cold War: U.S. President Ronald Reagan and Soviet leader Mikhail Gorbachev meet in Reykjavík, Iceland, in an effort to continue discussions about scaling back their intermediate missile arsenals in Europe.

1986    Mikhail Gorbachev, leader of the Soviet Union, releases Andrei Sakharov and his wife from internal exile in Gorky.

1988    U.S. President Ronald Reagan begins his first visit to the Soviet Union when he arrives in Moscow for a superpower summit with Soviet leader Mikhail Gorbachev.

1989    Soviet leader Mikhail Gorbachev arrives in Havana, Cuba to meet with Fidel Castro in an attempt to mend strained relations.

1989    Cold War: In a meeting off the coast of Malta, US President George H. W. Bush and Soviet leader Mikhail Gorbachev release statements indicating that the cold war between their nations may be coming to an end.

1990    Mikhail Gorbachev is elected as the first executive president of the Soviet Union.

Certain people in the United States are driving nails into this structure of our relationship, then cutting off the heads. So the Soviets must use their teeth to pull them out.

Democracy is the wholesome and pure air without which a socialist public organization cannot live a full-blooded life.

If the Russian word "Perestroika|perestroika" has easily entered the international lexicon, this is due to more than just interest in what is going on in the Soviet Union. Now the whole world needs restructuring, i.e. progressive development, a fundamental change.

Perestroika: New Thinking For Our Country and the World (1987)

Dangers await only those who do not react to life.

Speech in East Berlin (7 October 1989), in German: Wer zu spaet kommt, den bestraft das Leben. This is often misquoted as "He who comes too late is punished by life."

I believe, as Vladimir Lenin|Lenin said, that this revolutionary chaos may yet crystallize into new forms of life.