Encyclopedia
The Cervantes Institute is a worldwide non-profit organization
Non-profit organization
Nonprofit organization is neither a legal nor technical definition but generally refers to an organization that uses surplus revenues to achieve its goals, rather than distributing them as profit or dividends...
created by the Spanish government
Spanish Government
Spain is a constitutional monarchy whose government is defined by the Constitution of Spain. This was approved by a general referendum of the people of Spain in 1978...
in 1991. It is named after Miguel de Cervantes
Miguel de Cervantes
Miguel de Cervantes Saavedra was a Spanish novelist, poet, and playwright. His magnum opus, Don Quixote, considered the first modern novel, is a classic of Western literature, and is regarded amongst the best works of fiction ever written...
(1547–1616), the author of Don Quixote and perhaps the most important figure in the history of Spanish literature
Spanish literature
Spanish literature generally refers to literature written in the Spanish language within the territory that presently constitutes the state of Spain...
. The Cervantes Institute, a government agency, was modeled on the British Council
British Council
The British Council is a United Kingdom-based organisation specialising in international educational and cultural opportunities. It is registered as a charity both in England and Wales, and in Scotland...
and the German Goethe Institute, and is the largest organization in the world responsible for promoting the study and the teaching of Spanish language
Spanish language
Spanish , also known as Castilian , is a Romance language in the Ibero-Romance group that evolved from several languages and dialects in central-northern Iberia around the 9th century and gradually spread with the expansion of the Kingdom of Castile into central and southern Iberia during the...
and culture.

This organization has branched out in over 20 different countries with 54 centres devoted to the Spanish and Hispanic American culture and Spanish Language. Article 3 of Law 7/1991, created by the Instituto Cervantes on March 21, explains that the ultimate goals of the Institute are to promote the education, the study and the use of Spanish universally as a second language, to support the methods and activities that would help the process of Spanish language education, and to contribute to the advancement of the Spanish and Hispanic American cultures throughout non-Spanish-speaking countries. 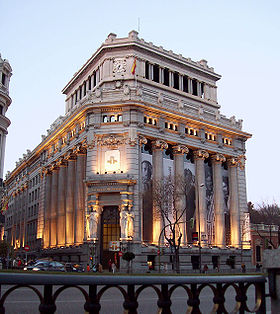 The administration of the Cervantes Institute is subdivided into three parts. A commitment and interest in planning the activities and direction of the Institute are managed by a high-profile membership.

The Centro Virtual Cervantes is an online service that was created in December 1997 by the Instituto Cervantes of Spain to contribute to the diffusion of the Spanish language and Hispanic cultures. It became one of the most important reference sites devoted to Spanish language and culture, having reached an average of over 100,000 visitors a month, including both professionals and the general public. It offers resources and services to teachers, students, translators, journalists and other professionals involved with the Spanish language, and as well as to Hispanists throughout the world, who study Hispanic cultures, and to any person who is interested in the language and Hispanic cultures. It also includes announcements of cultural events (Actos Culturales), four discussion forums, each of which focuses on a specific topic, and the language classroom, Aula de Lengua, designed for both teachers and learners of Spanish. The Instituto Cervantes also has a virtual presence in the 3D virtual world Second Life
Second Life
Second Life is an online virtual world developed by Linden Lab. It was launched on June 23, 2003. A number of free client programs, or Viewers, enable Second Life users, called Residents, to interact with each other through avatars...
.

On December 13, 2004, the Cervantes Institute formed its Centro de Formación de Profesores in its Head Office, located in Alcalá de Henares
Alcalá de Henares
Alcalá de Henares , meaning Citadel on the river Henares, is a Spanish city, whose historical centre is one of UNESCO's World Heritage Sites, and one of the first bishoprics founded in Spain...
, where Cervantes was born. This institution was founded to encourage the teaching of Spanish as a foreign language and to provide useful resources to its members. Throughout the year, it organizes the specific activities and programs for the center,with several different goals, which include teaching, providing the resources to the teachers to use in their education field, and developing specialised knowledge of the Spanish language for educational purposes. The Center supports the future teachers of Spanish through its 'Master of Education in Spanish as a Foreign Language', in collaboration with the International University Menéndez Pelayo. For teachers already involved in teaching, the Center provides advanced activities that produce a deeper knowledge, focusing on research or discussion in the classroom, and improving the students’ skills in Spanish language for them to become responsive in any communicational situations.

The Automatic Translator Service of the Cervantes Institute, "Portal de las Tecnologías Lingüisticas en España", was launched by the Cervantes Institute on January 10, 2005. It is a free service of machine translation sponsored by Telefónica. Since its launch, demand has steadily increased monthly to 55%, and it has performed more than 582,000 free translations. The Cervantes Institute's purpose in creating this service was to facilitate the access of Spanish to those information technology
Information technology
Information technology is the acquisition, processing, storage and dissemination of vocal, pictorial, textual and numerical information by a microelectronics-based combination of computing and telecommunications...
contents developed in other languages, and so people who speak other languages can have access to contents that are only available in Spanish. This service permits translation of texts and text files, as well as web pages, from Spanish to Catalan, French, Galician, English or Portuguese and vice versa. The pairs of language percentages used are as follows: English-Spanish, 23.47% of the total; Spanish-Catalan, 21.12%; Spanish-English, 13.64%; Portuguese-Spanish, 12.63%; Spanish-Portuguese, 10.39%; Catalan-Spanish, 6.48%; Spanish-French, 6.24%, and French-Spanish, 6.03%.

Since 1998 the Instituto Cervantes has published the annual El español en el mundo highlighting the state of Spanish in the world, and current trends. The Instituto has also run the Internet
Internet
The Internet is a global system of interconnected computer networks that use the standard Internet protocol suite to serve billions of users worldwide...
-based Centro Virtual Cervantes since 1997.

In 2005, along with the Alliance française
Alliance française
The Alliance française , or AF, is an international organisation that aims to promote French language and culture around the world. created in Paris on 21 July 1883, its primary concern is teaching French as a second language and is headquartered in Paris -History:The Alliance was created in Paris...
, the Società Dante Alighieri, the British Council
British Council
The British Council is a United Kingdom-based organisation specialising in international educational and cultural opportunities. It is registered as a charity both in England and Wales, and in Scotland...
, the Goethe-Institut
Goethe-Institut
The Goethe-Institut is a non-profit German cultural institution operational worldwide, promoting the study of the German language abroad and encouraging international cultural exchange and relations. The Goethe-Institut also fosters knowledge about Germany by providing information on German...
and the Instituto Camões
Instituto Camões
The Instituto Camões is an institution created in 1992 for the world-wide promotion of the Portuguese language and culture...
, the Instituto Cervantes was awarded the Prince of Asturias Award
Prince of Asturias Awards
The Prince of Asturias Awards are a series of annual prizes awarded in Spain by the Prince of Asturias Foundation to individuals, entities or organizations from around the world who make notable achievements in the sciences, humanities, and public affairs....
for outstanding achievements in communications and the humanities.

The Instituto Cervantes operates Centros Cervantes (full-fledged centres), and Aulas Cervantes (smaller "lecture halls"), as well as a network of associated institutions. These are Centros Acreditados (within Spain) and Centros Asociados (outside Spain). Its locations can be found: