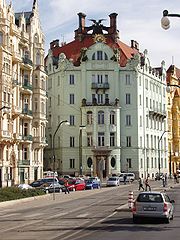 The Goethe-Institut (ˈgøːtə ɪnstiˈtuːt; Goethe Institute) is a non-profit German
Germany
Germany , officially the Federal Republic of Germany , is a federal parliamentary republic in Europe. The country consists of 16 states while the capital and largest city is Berlin. Germany covers an area of 357,021 km2 and has a largely temperate seasonal climate...
cultural
Culture
Culture is a term that has many different inter-related meanings. For example, in 1952, Alfred Kroeber and Clyde Kluckhohn compiled a list of 164 definitions of "culture" in Culture: A Critical Review of Concepts and Definitions...
institution operational worldwide, promoting the study of the German language
German language
German is a West Germanic language, related to and classified alongside English and Dutch. With an estimated 90 – 98 million native speakers, German is one of the world's major languages and is the most widely-spoken first language in the European Union....
abroad and encouraging international cultural exchange and relations. The Goethe-Institut also fosters knowledge about Germany by providing information on German culture, society and politics. This includes not only the exchange of film
Film
A film, also called a movie or motion picture, is a series of still or moving images. It is produced by recording photographic images with cameras, or by creating images using animation techniques or visual effects...
s, music
Music
Music is an art form whose medium is sound and silence. Its common elements are pitch , rhythm , dynamics, and the sonic qualities of timbre and texture...
, theatre
Theatre
Theatre is a collaborative form of fine art that uses live performers to present the experience of a real or imagined event before a live audience in a specific place. The performers may communicate this experience to the audience through combinations of gesture, speech, song, music or dance...
, literature
Literature
Literature is the art of written works, and is not bound to published sources...
, and the like, but also the values of civil society. Goethe cultural societies, reading rooms, and exam and language centers have played a central role in the cultural and educational policies of Germany for close to 60 years. It is named after German
German literature
German literature comprises those literary texts written in the German language. This includes literature written in Germany, Austria, the German part of Switzerland, and to a lesser extent works of the German diaspora. German literature of the modern period is mostly in Standard German, but there...
polymath
Polymath
A polymath is a person whose expertise spans a significant number of different subject areas. In less formal terms, a polymath may simply be someone who is very knowledgeable...
Johann Wolfgang von Goethe
Johann Wolfgang von Goethe
Johann Wolfgang von Goethe was a German writer, pictorial artist, biologist, theoretical physicist, and polymath. He is considered the supreme genius of modern German literature. His works span the fields of poetry, drama, prose, philosophy, and science. His Faust has been called the greatest long...
.

The Goethe-Institut draws its material from many sections of the cosmopolitan German society and culture, combining the experience and ideas of its partners with cross-cultural expertise, the principle of dialogue and partnership, offering support to all those actively involved with Germany and its language and culture. The Goethe-Institut e.V. is an autonomous body and politically independent.

Partners of the institute and its centers are public and private cultural institutions, the federal states, local authorities and the world of commerce. Much of the Goethe-Institut's overall budget consists of yearly grants from the German Foreign Office and the German Press Office. The relationship with the Foreign Office is governed by general agreement. Self-generated income and contributions from sponsors and patrons, partners and friends broaden the scope of the work of the Goethe-Institut. The Goethe-Institut carefully coordinates its activities with other mediators of cultural and educational foreign policy.

1951
The Goethe-Institut is founded as successor to the German Academy (Deutsche Akademie
Deutsche Akademie
The Deutsche Akademie was a German cultural institute founded in 1925 at Munich, under the Weimar Republic. The controversial geopolitician Karl Haushofer was among the academics associated with it in its initial phases....
/DA). Its first task is to provide further training for foreign German teachers in Germany.

1953
The first language courses run by the Goethe-Institut begin in Bad Reichenhall. Due to growing demand, new centres of learning are soon opened in Murnau and Kochel, the focus of selection being on towns which are small and idyllic and which show post-war Germany at its best. Lessons are taught from the first textbook developed by the Goethe-Institut, the now legendary "Schulz-Griesbach".

1953-55
The first foreign lectureships of what was the German Academy are taken on by the Goethe-Institut. Responsibilities include German tuition, teacher training and providing a program of cultural events to accompany courses.

1959-60
On the initiative of the head of the arts sector of the Foreign Office, Dieter Sattler, the Goethe-Institut gradually takes over all of the German cultural institutes abroad. This development of a broad international institute network signals an intensification of Germany's foreign cultural policy.

1968
Influenced by the student revolts of the late 1960s the Goethe-Institut readjusts its program of cultural events to include socio-political topics and avant-garde art.

1970
Acting on behalf of the Foreign Office Ralf Dahrendorf develops his "guiding principles for foreign cultural policy". Cultural work involving dialog and partnership is declared the third pillar of German foreign policy. During the Willy Brandt era the concept of "extended culture" forms the basis of activities at the Goethe-Institut.

1980
A new concept regarding the location of institutes within Germany is drawn up. Places of instruction in small towns, mostly in Bavaria, are replaced by institutes in cities and university towns.

1989/90
The fall of the Berlin Wall also marks a turning point for the Goethe-Institut. Its activities in the 1990s are thus strongly centred on Eastern Europe. Numerous new institutes are set up as a result.

2001
The Goethe-Institut merges with Inter Nationes.

2007
For the first time in more than ten years the German parliament decides to increase the funds of the Goethe-Institut.

The Goethe-Institut is mainly financed by the national government of Germany, and has around 3,300 employees and an overall budget of approximately 278 million euro
Euro
The euro is the official currency of the eurozone: 17 of the 27 member states of the European Union. It is also the currency used by the Institutions of the European Union. The eurozone consists of Austria, Belgium, Cyprus, Estonia, Finland, France, Germany, Greece, Ireland, Italy, Luxembourg,...
s at its disposal, more than half of which is generated from language course tuition and examination fees. The Goethe-Institut offers scholarships to students from foreign countries. Most of these scholarships, however, are aimed at teachers of German.

The Goethe-Institut has its headquarters in Munich
Munich
Munich The city's motto is "" . Before 2006, it was "Weltstadt mit Herz" . Its native name, , is derived from the Old High German Munichen, meaning "by the monks' place". The city's name derives from the monks of the Benedictine order who founded the city; hence the monk depicted on the city's coat...
. Its president is Klaus-Dieter Lehmann
Klaus-Dieter Lehmann
Klaus-Dieter Lehmann is a German librarian and president of the Goethe-Institut since April 2008. In 1988 he became director of the Deutsche Bibliothek, Frankfurt, the national library of West Germany...
, the General Secretary Dr. Hans-Georg Knopp; Financial Manager Mr. Jürgen Maier.

The institute has developed a series of exams for learners of German as a foreign language (Deutsch als Fremdsprache, DaF) at all levels: A1 up to C2. These can be taken both in Germany and abroad, and have been adapted to fit into the Common European Framework of Reference for Languages
Common European Framework of Reference for Languages
The Common European Framework of Reference for Languages: Learning, Teaching, Assessment, abbreviated as CEFR, is a guideline used to describe achievements of learners of foreign languages across Europe and, increasingly, in other countries...
(CEF), the standard for European language testing. There is also one exam, the Großes Deutsches Sprachdiplom, which is at a higher level than the highest CEF level. Below is a table of the basic Goethe-Institut exams as they fit into the scheme:

In 2005, along with the Alliance française
Alliance française
The Alliance française , or AF, is an international organisation that aims to promote French language and culture around the world. created in Paris on 21 July 1883, its primary concern is teaching French as a second language and is headquartered in Paris -History:The Alliance was created in Paris...
, the Società Dante Alighieri, the British Council
British Council
The British Council is a United Kingdom-based organisation specialising in international educational and cultural opportunities. It is registered as a charity both in England and Wales, and in Scotland...
, the Instituto Cervantes
Instituto Cervantes
The Cervantes Institute is a worldwide non-profit organization created by the Spanish government in 1991. It is named after Miguel de Cervantes , the author of Don Quixote and perhaps the most important figure in the history of Spanish literature...
and the Instituto Camões
Instituto Camões
The Instituto Camões is an institution created in 1992 for the world-wide promotion of the Portuguese language and culture...
, the Goethe-Institut was awarded the Prince of Asturias Award
Prince of Asturias Awards
The Prince of Asturias Awards are a series of annual prizes awarded in Spain by the Prince of Asturias Foundation to individuals, entities or organizations from around the world who make notable achievements in the sciences, humanities, and public affairs....
for outstanding achievements in communications and the humanities.

In 2007, it received a special Konrad Duden Prize for its work in the field of German language.