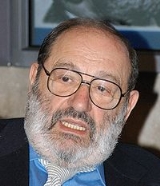 Overview
Umberto Eco Knight Grand Cross
Omri
Omri was a king of Israel, successful military campaigner and first in the line of Omride kings that included Ahab, Ahaziah and Joram.He was "commander of the army" of king Elah when Zimri murdered Elah and made himself king. Instead, the troops at Gibbethon chose Omri as king, and he led them to...
(born 5 January 1932) is an Italian semiotician
Semiotics
Semiotics, also called semiotic studies or semiology, is the study of signs and sign processes , indication, designation, likeness, analogy, metaphor, symbolism, signification, and communication...
, essayist
Essay
An essay is a piece of writing which is often written from an author's personal point of view. Essays can consist of a number of elements, including: literary criticism, political manifestos, learned arguments, observations of daily life, recollections, and reflections of the author. The definition...
, philosopher, literary critic, and novelist, best known for his novel The Name of the Rose
The Name of the Rose
The Name of the Rose is the first novel by Italian author Umberto Eco. It is a historical murder mystery set in an Italian monastery in the year 1327, an intellectual mystery combining semiotics in fiction, biblical analysis, medieval studies and literary theory...
(Il nome della rosa, 1980), an intellectual mystery combining semiotics in fiction, biblical analysis, medieval studies and literary theory. He has also written academic texts, children's books and many essays. Eco is the founder of the Dipartimento di Comunicazione at the University of San Marino, President of the Scuola Superiore di Studi Umanistici, University of Bologna
University of Bologna
The Alma Mater Studiorum - University of Bologna is the oldest continually operating university in the world, the word 'universitas' being first used by this institution at its foundation. The true date of its founding is uncertain, but believed by most accounts to have been 1088...
, member of the Accademia dei Lincei
Accademia dei Lincei
The Accademia dei Lincei, , is an Italian science academy, located at the Palazzo Corsini on the Via della Lungara in Rome, Italy....
(since November 2010) and an Honorary Fellow of Kellogg College, University of Oxford
University of Oxford
The University of Oxford is a university located in Oxford, United Kingdom. It is the second-oldest surviving university in the world and the oldest in the English-speaking world. Although its exact date of foundation is unclear, there is evidence of teaching as far back as 1096...
.

The day after the fall of Nikita Khrushchev|Khrushchev, the editors of Pravda, Izvestiia, the heads of the radio and television were replaced; the army wasn't called out. Today a country belongs to the person who controls communications.

In the United States, politics is a profession, whereas in Europe it is a right and a duty.

Preface to the American edition of Travels in Hyperreality (1986)

To read fiction means to play a game by which we give sense to the immensity of things that happened, are happening, or will happen in the actual world. By reading narrative, we escape the anxiety that attacks us when we try to say something true about the world. This is the consoling function of narrative — the reason people tell stories, and have told stories from the beginning of time.

Reflecting on these complex relationships between reader and story, fiction and life, can constitute a form of therapy against the sleep of reason, which generates monsters.

After all, the cultivated person's first duty is to be always prepared to rewrite the encyclopaedia.

I don't miss my youth. I'm glad I had one, but I wouldn't like to start over.

"On the Disadvantages and Advantages of Death" in La mort et l'immortalié, edited by Frédéric Lenoir (2004).

There are magic moments, involving great physical fatigue and intense motor excitement, that produce visions of people known in the past. As I learned later from the delightful little book of the Abbé de Bucquoy, there are also visions of books as yet unwritten.

A monk should surely love his books with humility, wishing their good and not the glory of his own curiosity; but what the temptation of adultery is for laymen and the yearning for riches is for secular ecclesiastics, the seduction of knowledge is for monks.