Encyclopedia
Oviedo is the capital city of the Principality of Asturias
Asturias
The Principality of Asturias is an autonomous community of the Kingdom of Spain, coextensive with the former Kingdom of Asturias in the Middle Ages...
in northern Spain
Spain
Spain , officially the Kingdom of Spain languages]] under the European Charter for Regional or Minority Languages. In each of these, Spain's official name is as follows:;;;;;;), is a country and member state of the European Union located in southwestern Europe on the Iberian Peninsula...
. It is also the name of the municipality that contains the city.

Oviedo, which is the administrative and commercial centre of the region, also hosts the annual Prince of Asturias Awards
Prince of Asturias Awards
The Prince of Asturias Awards are a series of annual prizes awarded in Spain by the Prince of Asturias Foundation to individuals, entities or organizations from around the world who make notable achievements in the sciences, humanities, and public affairs....
. This prestigious event, held in the city's Campoamor Theatre, recognizes international achievement in eight categories. Award winners in 2007 include Bob Dylan
Bob Dylan
Bob Dylan is an American singer-songwriter, musician, poet, film director and painter. He has been a major and profoundly influential figure in popular music and culture for five decades. Much of his most celebrated work dates from the 1960s when he was an informal chronicler and a seemingly...
in the category of Arts
ARts
aRts, which stands for analog Real time synthesizer, is an audio framework that is no longer under development. It is best known for previously being used in KDE to simulate an analog synthesizer....
and Al Gore
Al Gore
Albert Arnold "Al" Gore, Jr. served as the 45th Vice President of the United States , under President Bill Clinton. He was the Democratic Party's nominee for President in the 2000 U.S. presidential election....
in the category of International Cooperation. Oviedo University's international campus attracts many foreign scholars from all over the globe. 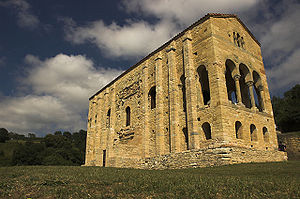 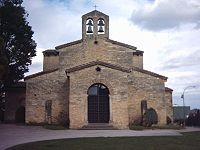 It is said that two monks, Máximo and Fromestanus, founded the city in 761. That settlement was soon to be completed with the construction of a small church dedicated to Saint Vincent
Vincent of Saragossa
Saint Vincent of Saragossa, also known as Vincent Martyr, Vincent of Huesca or Vincent the Deacon, is the patron saint of Lisbon. His feast day is 22 January in the Roman Catholic Church and Anglican Communion and 11 November in the Eastern Orthodox Churches...
. Nevertheless, the archaeological register has shown traces of occupation since the 1st century, in Roman times.

King Fruela I of Asturias
Fruela I of Asturias
Fruela I , called the Cruel, was the King of Asturias from 757 until his death, when he was assassinated. He was the eldest son of Alfonso I and continued the work of his father....
, the fourth of the Asturian monarchs, was the first decided promoter of the city as may be witnessed by his construction of both a palace and a nearby church. Oviedo owes to a later king, Alfonso II
Alfonso II of Asturias
Alfonso II , called the Chaste, was the king of Asturias from 791 to his death, the son of Fruela I and the Basque Munia.He was born in Oviedo in 759 or 760. He was put under the guardianship of his aunt Adosinda after his father's death, but one tradition relates his being put in the monastery of...
The Chaste (791-842), its establishment as a capital city and ruling seat as a result of the moving of the court from Pravia
Pravia
Pravia is a municipality in the Autonomous Community of the Principality of Asturias. It is bordered on the north by Cudillero and Muros de Nalón, on the east by Candamo and Soto del Barco, on the west by Cudillero and Salas, and on the south by Candamo and Salas.Since 774, when King Silo...
and the creation of the Pilgrim’s Route to Santiago de Compostela
Santiago de Compostela
Santiago de Compostela is the capital of the autonomous community of Galicia, Spain.The city's Cathedral is the destination today, as it has been throughout history, of the important 9th century medieval pilgrimage route, the Way of St. James...
, a major event in the history of Oviedo, a church dedicated to The Saviour, the Cathedral of San Salvador
Cathedral of San Salvador (Oviedo)
The Metropolitan Cathedral Basilica of the Holy Saviour is a Roman Catholic cathedral and minor basilica in the centre of Oviedo, in the Asturias region of northern Spain....
, and a royal palace formed the nucleus and motive power of Oviedo.

During this period the city became the centre of an original and unique architectural expression, inheritor of Visigothic, Roman and Nordic traditions, which was to reach its high point during the reign of Ramiro I of Asturias
Ramiro I of Asturias
Ramiro I was King of Asturias from 842 until his death. Son of Bermudo I, he succeeded Alfonso II.First, he had to deal with the usurper Nepocian, defeating him at the Battle of the Bridge of Cornellana, by the river Narcea. Ramiro then removed the system of election which allowed his family to be...
. Ramiro I sponsored many unique construction projects, which remain a signature of Oviedo to this day.

The moving of the royal court to León, after the death of Alfonso III
Alfonso III of León
Alfonso III , called the Great, was the king of León, Galicia and Asturias from 866 until his death. He was the son and successor of Ordoño I. In later sources he is the earliest to be called "Emperor of Spain"...
, The Great, links the life of the city to the relics preserved in its cathedral and the passing of pilgrims that visit El Salvador, and continue on their way to Santiago de Compostela. The following centuries (12th-16th) witness the development of the medieval city, the outlines of which are still preserved today, the construction of the city walls, a devastating fire which took place on Christmas Eve in 1521, and the aqueduct
Aqueduct
An aqueduct is a water supply or navigable channel constructed to convey water. In modern engineering, the term is used for any system of pipes, ditches, canals, tunnels, and other structures used for this purpose....
works, Los Pilares, constructed in order to provide the city with water throughout the 16th century.

The Siege of Oviedo
Siege of Oviedo
The Siege of Oviedo was a siege in the Spanish Civil War that lasted from July 19 until October 16, 1936. The town garrison, under the command of Colonel Antonio Aranda Mata, declared for the uprising and held out until relieved by a Nationalist force....
in 1936 was a memorable event in the Spanish Civil War
Spanish Civil War
The Spanish Civil WarAlso known as The Crusade among Nationalists, the Fourth Carlist War among Carlists, and The Rebellion or Uprising among Republicans. was a major conflict fought in Spain from 17 July 1936 to 1 April 1939...
. The army garrison rose in support of the coup d'état
Coup d'état
A coup d'état state, literally: strike/blow of state)—also known as a coup, putsch, and overthrow—is the sudden, extrajudicial deposition of a government, usually by a small group of the existing state establishment—typically the military—to replace the deposed government with another body; either...
and stood a siege of three months by an improvised force, loyal to the Republican government until relieved in 1937.

Oviedo inspired the fictional city of Vetusta in Leopoldo Alas' La Regenta
La regenta
La Regenta is a realist novel by Spanish author Leopoldo Alas y Ureña, also known as Clarín, published in 1884 and 1885.-Plot:The story is set in Vetusta , where the main character of the work, Ana Ozores "La Regenta", marries the former prime magistrate of the city, Víctor Quintanar, a kind...
. Other Spanish writers were inspired by the city, including Ramón Pérez de Ayala
Ramón Pérez de Ayala
Ramón Pérez de Ayala was a Spanish writer. He was the Spanish ambassador to England and voluntarily exiled himself to South America because of the Spanish Civil War .-Background:...
in Tigre Juan and Dolores Medio in her novel Nosotros los Rivero.

Other cultural centres in Oviedo:


Teams based in Oviedo


Other places in the municipality