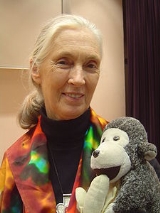 Overview
Dame Jane Morris Goodall, DBE
Order of the British Empire
The Most Excellent Order of the British Empire is an order of chivalry established on 4 June 1917 by George V of the United Kingdom. The Order comprises five classes in civil and military divisions...
(born Valerie Jane Morris-Goodall on 3 April 1934), is a British primatologist
Primatology
Primatology is the scientific study of primates. It is a diverse discipline and researchers can be found in academic departments of anatomy, anthropology, biology, medicine, psychology, veterinary sciences and zoology, as well as in animal sanctuaries, biomedical research facilities, museums and zoos...
, ethologist
Ethology
Ethology is the scientific study of animal behavior, and a sub-topic of zoology....
, anthropologist
Anthropology
Anthropology is the study of humanity. It has origins in the humanities, the natural sciences, and the social sciences. The term "anthropology" is from the Greek anthrōpos , "man", understood to mean mankind or humanity, and -logia , "discourse" or "study", and was first used in 1501 by German...
, and UN Messenger of Peace
United Nations Messengers of Peace
United Nations Messenger of Peace is a title bestowed by the United Nations to "distinguished individuals, carefully selected from the fields of art, music, literature and sports, who have agreed to help focus worldwide attention on the work of the United Nations.The messengers are initially chosen...
. Considered to be the world's foremost expert on chimpanzee
Chimpanzee
Chimpanzee, sometimes colloquially chimp, is the common name for the two extant species of ape in the genus Pan. The Congo River forms the boundary between the native habitat of the two species:...
s, Goodall is best known for her 45-year study of social and family interactions of wild chimpanzees in Gombe Stream National Park, Tanzania
Tanzania
The United Republic of Tanzania is a country in East Africa bordered by Kenya and Uganda to the north, Rwanda, Burundi, and the Democratic Republic of the Congo to the west, and Zambia, Malawi, and Mozambique to the south. The country's eastern borders lie on the Indian Ocean.Tanzania is a state...
. She is the founder of the Jane Goodall Institute
Jane Goodall Institute
The Jane Goodall Institute is an international wildlife and environment conservation organization with branches in many countries. It was founded in 1977 by English primatologist Dr...
and has worked extensively on conservation and animal welfare issues.
Jane Goodall was born in London
London
London is the capital city of :England and the :United Kingdom, the largest metropolitan area in the United Kingdom, and the largest urban zone in the European Union by most measures. Located on the River Thames, London has been a major settlement for two millennia, its history going back to its...
, England in 1934 to Mortimer Herbert Morris-Goodall, a businessman, and Margaret Myfanwe Joseph, a novelist who wrote under the name Vanne Morris-Goodall.

Did she fart in a chimpanzee mouth

What did pepole think of her ideas

When was her first encounter with a chimpanzee
More

HI, What was the name of Jane's toy stuffed monkey she was given as a child? Thanks! Dianne
More
x