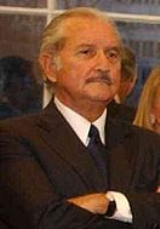 Overview
Carlos Fuentes Macías is a Mexican writer and one of the best-known living novelists and essayists in the Spanish-speaking world. He has influenced contemporary Latin American literature
Latin American literature
Latin American literature consists of the oral and written literature of Latin America in several languages, particularly in Spanish, Portuguese, and indigenous languages of the Americas. It rose to particular prominence globally during the second half of the 20th century, largely due to the...
, and his works have been widely translated into English and other languages.
Fuentes was born in Panama City
Panama City
Panama is the capital and largest city of the Republic of Panama. It has a population of 880,691, with a total metro population of 1,272,672, and it is located at the Pacific entrance of the Panama Canal, in the province of the same name. The city is the political and administrative center of the...
to Mexican parents. His father was a diplomat, and Carlos spent his childhood in various capital cities in America: Montevideo
Montevideo
Montevideo is the largest city, the capital, and the chief port of Uruguay. The settlement was established in 1726 by Bruno Mauricio de Zabala, as a strategic move amidst a Spanish-Portuguese dispute over the platine region, and as a counter to the Portuguese colony at Colonia del Sacramento...
, Rio de Janeiro
Rio de Janeiro
Rio de Janeiro , commonly referred to simply as Rio, is the capital city of the State of Rio de Janeiro, the second largest city of Brazil, and the third largest metropolitan area and agglomeration in South America, boasting approximately 6.3 million people within the city proper, making it the 6th...
, Washington
Washington, D.C.
Washington, D.C., formally the District of Columbia and commonly referred to as Washington, "the District", or simply D.C., is the capital of the United States. On July 16, 1790, the United States Congress approved the creation of a permanent national capital as permitted by the U.S. Constitution....
, Santiago
Santiago, Chile
Santiago , also known as Santiago de Chile, is the capital and largest city of Chile, and the center of its largest conurbation . It is located in the country's central valley, at an elevation of above mean sea level...
, Quito
Quito
San Francisco de Quito, most often called Quito , is the capital city of Ecuador in northwestern South America. It is located in north-central Ecuador in the Guayllabamba river basin, on the eastern slopes of Pichincha, an active stratovolcano in the Andes mountains...
, and Buenos Aires
Buenos Aires
Buenos Aires is the capital and largest city of Argentina, and the second-largest metropolitan area in South America, after São Paulo. It is located on the western shore of the estuary of the Río de la Plata, on the southeastern coast of the South American continent...
.

How and when did he become involved in his carrer?

Does anyone have an analysis of the meaning behind the ensayo/short essay, "Una familia lejana Also known as "La familia" (1980)"? I cannot quite get ...
More

Fuentes has fathered three children. Only one of them survived: Cecilia Fuentes Macedo, born in 1962, now working in television production. A son, Carlos Fuentes Lemus, died from complications associated with hemophilia in 1999 at the age of 25. A daughter, Natasha Fuentes Lemus (born 31 August 1974), died of an apparent drug overdose in Mexico City 22 August 2005, at the age of 30.

Carlos Fuentes received the Four Freedoms Award for Freedom of Speech and Expression in 2006, in Middelburg, the Netherlands. www.fourfreedoms.nl

When he was 30 years old Fuentes published his first novel, La región más transparente, which became a classic contemporary novel. It was innovative not only for its prose, but also by having a metropolis, Mexico City
Mexico City
Mexico City is the Federal District , capital of Mexico and seat of the federal powers of the Mexican Union. It is a federal entity within Mexico which is not part of any one of the 31 Mexican states but belongs to the federation as a whole...
, as its main setting. This novel provides insight into Mexican culture, which is made up of a mixture with the Spanish, the indigenous and the mestizo
Mestizo
Mestizo is a term traditionally used in Latin America, Philippines and Spain for people of mixed European and Native American heritage or descent...
, all cohabiting in the same geographical area but with different cultures.

He published Las Buenas Conciencias in 1959. This is probably his most accessible novel depicting the privileged middle classes of a medium-sized town, probably modelled on Guanajuato.

His 1960s novels, Aura
Aura (Fuentes)
Aura is a novel by Carlos Fuentes, first published in 1962 in Mexico. The first English translation by Lysander Kemp, was published in 1965 by Farrar, Straus and Giroux.-Plot:...
(1962) and La muerte de Artemio Cruz
The Death of Artemio Cruz
The Death of Artemio Cruz is a novel written in 1962 by Mexican writer Carlos Fuentes and is considered to be a contributor to the Latin American literary movement known as the Latin American "Boom".-Plot summary:...
(1962) are acclaimed for using experimental modern narrative styles (including the second person
Second-person narrative
The second-person narrative is a narrative mode in which the protagonist or another main character is referred to by employment of second-person personal pronouns and other kinds of addressing forms, for example the English second-person pronoun "you"....
form) to discuss history, society and identity.

In 1967, during a meeting with Alejo Carpentier
Alejo Carpentier
Alejo Carpentier y Valmont was a Cuban novelist, essayist, and musicologist who greatly influenced Latin American literature during its famous "boom" period. Born in Lausanne, Switzerland, Carpentier grew up in Havana, Cuba; and despite his European birthplace, Carpentier strongly self-identified...
, Julio Cortázar
Julio Cortázar
Julio Cortázar, born Jules Florencio Cortázar, was an Argentine writer. Cortázar, known as one of the founders of the Latin American Boom, influenced an entire generation of Spanish speaking readers and writers in the Americas and Europe.-Early life:Cortázar's parents, Julio José Cortázar and...
and Miguel Otero Silva
Miguel Otero Silva
Miguel Otero Silva , was a Venezuelan writer, journalist, humorist and politician. Remaining a figure of great reference in Venezuelan literature, his literary and journalistic works were strictly related to the social and political history of Venezuela.-Life:Born in Barcelona, Anzoátegui State,...
, Carlos Fuentes launched the project of a series of biographies
Biography
A biography is a detailed description or account of someone's life. More than a list of basic facts , biography also portrays the subject's experience of those events...
depicting Latin American caudillos, which would be called Los Padres de la Patria. Although the project was never completed, it provided the base for Alejo Carpentier's Reasons of State (El recurso del método, 1974) and various other Dictator Novels (novelas del dictador).

His 1985 novel Gringo viejo, the first United States bestseller written by a Mexican author, was filmed as Old Gringo
Old Gringo
Old Gringo is a 1989 film directed by Luis Puenzo and co-written with Aída Bortnik, based on the novel Gringo Viejo by Mexican novelist Carlos Fuentes.The film stars Jane Fonda, Gregory Peck, and Jimmy Smits....
(1989) starring Gregory Peck
Gregory Peck
Eldred Gregory Peck was an American actor.One of 20th Century Fox's most popular film stars from the 1940s to the 1960s, Peck continued to play important roles well into the 1980s. His notable performances include that of Atticus Finch in the 1962 film To Kill a Mockingbird, for which he won an...
and Jane Fonda
Jane Fonda
Jane Fonda is an American actress, writer, political activist, former fashion model, and fitness guru. She rose to fame in the 1960s with films such as Barbarella and Cat Ballou. She has won two Academy Awards and received several other movie awards and nominations during more than 50 years as an...
.

In 1994, he published Diana, The Goddess Who Hunts Alone, a fictionalized account of his alleged affair with Jean Seberg
Jean Seberg
Jean Dorothy Seberg was an American actress. She starred in 37 films in Hollywood and in France, including Breathless , the musical Paint Your Wagon and the disaster film Airport ....
. However, his account has been questioned several times.

Fuentes regularly contributes essays on politics and culture to the Spanish newspaper El País and the Mexican Reforma
Reforma
Reforma is a Mexican newspaper based in Mexico City. It has 276,700 readers in Mexico City. The paper shares content with other papers in parent newsgroup Grupo Reforma. The cumulative readership of the newsgroup is above 400,000...
. He is a observer of Mexico-U.S. relations and critic of the United States' policies in Latin America. He also wrote Las Dos Elenas.