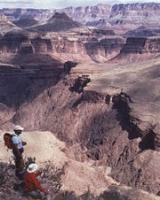 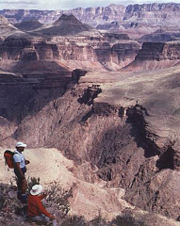 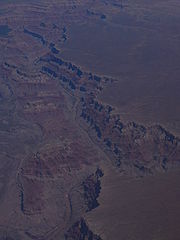 A famous example is the Grand Canyon
Grand Canyon
The Grand Canyon is a steep-sided canyon carved by the Colorado River in the United States in the state of Arizona. It is largely contained within the Grand Canyon National Park, the 15th national park in the United States...
in
Arizona
Arizona
Arizona ; is a state located in the southwestern region of the United States. It is also part of the western United States and the mountain west. The capital and largest city is Phoenix...
with an average depth of one mile and a volume of 4.17 trillion cubic metres. In the southwestern United States, canyons are important archeologically because of the many cliff-dwelling
Cliff-dwelling
Cliff dwelling is the general archaeological term for the habitations of prehistorical peoples, formed by using niches or caves in high cliffs, with more or less excavation or with additions in the way of masonry....
s built there, largely by the earlier inhabitants, Ancient Pueblo Peoples
Ancient Pueblo Peoples
Ancient Pueblo People or Ancestral Pueblo peoples were an ancient Native American culture centered on the present-day Four Corners area of the United States, comprising southern Utah, northern Arizona, northwest New Mexico, and southern Colorado...
.

The Yarlung Zangbo Grand Canyon (or Tsangpo Canyon), along the Yarlung Tsangpo River in Tibet
Tibet Autonomous Region
The Tibet Autonomous Region , Tibet or Xizang for short, also called the Xizang Autonomous Region is a province-level autonomous region of the People's Republic of China , created in 1965....
, China
People's Republic of China
China , officially the People's Republic of China , is the most populous country in the world, with over 1.3 billion citizens. Located in East Asia, the country covers approximately 9.6 million square kilometres...
, is regarded by some as the deepest canyon in the world at 18,000 feet, and is slightly longer than Grand Canyon making it one of the world's largest. The Kali Gandaki Gorge
Kali Gandaki Gorge
The Kali Gandaki Gorge or Andha Galchi is the gorge of the Kali Gandaki in the Himalayas in Nepal, by some measures the deepest gorge in the world....
in midwest Nepal is seen by others to be the deepest canyon, with a 21,000 foot difference between the level of the river and the peaks surrounding it.

Sometimes large rivers run through canyons as the result of gradual geological uplift. These are called entrenched river
Entrenched river
An entrenched river is a river that is confined to a canyon or gorge, usually with a relatively narrow width and little or no flood plain, and often with meanders worn into the landscape...
s, because they are unable to easily alter their course. The Colorado River in the Southwest
Southwestern United States
The Southwestern United States is a region defined in different ways by different sources. Broad definitions include nearly a quarter of the United States, including Arizona, California, Colorado, Nevada, New Mexico, Oklahoma, Texas and Utah...
and the Snake River
Snake River
The Snake is a major river of the greater Pacific Northwest in the United States. At long, it is the largest tributary of the Columbia River, the largest North American river that empties into the Pacific Ocean...
in the Northwest
Northwestern United States
The Northwestern United States comprise the northwestern states up to the western Great Plains regions of the United States, and consistently include the states of Oregon, Washington, Idaho, Montana, Wyoming, to which part of southeast Alaska is also sometimes included...
are two examples of tectonic uplift
Tectonic uplift
Tectonic uplift is a geological process most often caused by plate tectonics which increases elevation. The opposite of uplift is subsidence, which results in a decrease in elevation. Uplift may be orogenic or isostatic.-Orogenic uplift:...
.

Canyons often form in areas of limestone
Limestone
Limestone is a sedimentary rock composed largely of the minerals calcite and aragonite, which are different crystal forms of calcium carbonate . Many limestones are composed from skeletal fragments of marine organisms such as coral or foraminifera....
rock. Limestone is to a certain extent soluble, so cave
Cave
A cave or cavern is a natural underground space large enough for a human to enter. The term applies to natural cavities some part of which is in total darkness. The word cave also includes smaller spaces like rock shelters, sea caves, and grottos.Speleology is the science of exploration and study...
systems form in the rock. When these collapse a canyon is left, for example in the Mendip Hills
Mendip Hills
The Mendip Hills is a range of limestone hills to the south of Bristol and Bath in Somerset, England. Running east to west between Weston-super-Mare and Frome, the hills overlook the Somerset Levels to the south and the Avon Valley to the north...
in Somerset
Somerset
The ceremonial and non-metropolitan county of Somerset in South West England borders Bristol and Gloucestershire to the north, Wiltshire to the east, Dorset to the south-east, and Devon to the south-west. It is partly bounded to the north and west by the Bristol Channel and the estuary of the...
and Yorkshire Dales
Yorkshire Dales
The Yorkshire Dales is the name given to an upland area in Northern England.The area lies within the historic county boundaries of Yorkshire, though it spans the ceremonial counties of North Yorkshire, West Yorkshire and Cumbria...
in Yorkshire
Yorkshire
Yorkshire is a historic county of northern England and the largest in the United Kingdom. Because of its great size in comparison to other English counties, functions have been increasingly undertaken over time by its subdivisions, which have also been subject to periodic reform...
, England.

A canyon may also refer to a rift between two mountain peaks such as those in ranges such as the Rocky Mountains
Rocky Mountains
The Rocky Mountains are a major mountain range in western North America. The Rocky Mountains stretch more than from the northernmost part of British Columbia, in western Canada, to New Mexico, in the southwestern United States...
, the Alps
Alps
The Alps is one of the great mountain range systems of Europe, stretching from Austria and Slovenia in the east through Italy, Switzerland, Liechtenstein and Germany to France in the west....
, the Himalayas
Himalayas
The Himalaya Range or Himalaya Mountains Sanskrit: Devanagari: हिमालय, literally "abode of snow"), usually called the Himalayas or Himalaya for short, is a mountain range in Asia, separating the Indian subcontinent from the Tibetan Plateau...
or the Andes
Andes
The Andes is the world's longest continental mountain range. It is a continual range of highlands along the western coast of South America. This range is about long, about to wide , and of an average height of about .Along its length, the Andes is split into several ranges, which are separated...
. Usually a river or stream and erosion carve out such splits between mountains. Examples of mountain type canyons are Provo Canyon
Provo Canyon
Provo Canyon is a canyon located in unincorporated Utah County, Utah, USA and Wasatch County, Utah. Provo Canyon splits between Mount Timpanogos on the north and Mount Cascade on the south. The canyon extends from Orem on the west end to Heber City on the east. The canyon's main thoroughfare is...
in Utah or Yosemite National Park
Yosemite National Park
Yosemite National Park is a United States National Park spanning eastern portions of Tuolumne, Mariposa and Madera counties in east central California, United States. The park covers an area of and reaches across the western slopes of the Sierra Nevada mountain chain...
in California's Sierra Nevada. Canyons within mountains or gorges that only have an opening on one side are called box canyon
Box canyon
Box Canyon is a Box canyon in Ouray County, Colorado, United States. It was originally founded as a mining camp and helped the city of Ouray establish itself as a permanent community. Box Canyon is home to Box Canyon Falls, a 285-foot waterfall, with quartzite walls that extend almost one hundred...
s. Slot canyon
Slot canyon
A slot canyon is a narrow canyon, formed by the wear of water rushing through rock. A slot canyon is significantly deeper than it is wide. Some slot canyons can measure less than one metre across at the top but drop more than 30 m to the floor of the canyon.Most slot canyons are formed in...
s are very narrow canyons, often with smooth walls.


The definition of "largest canyon" is rather imprecise, as a canyon can be large by its depth, length, or the total area of the canyon system. Also the inaccessibility of the major canyons in the Himalaya contributes to their not being regarded as candidates for the biggest canyon. The definition of "deepest canyon" is similarly imprecise, especially if one includes mountain canyons as well as canyons cut through relatively flat plateau
Plateau
In geology and earth science, a plateau , also called a high plain or tableland, is an area of highland, usually consisting of relatively flat terrain. A highly eroded plateau is called a dissected plateau...
s (which have a somewhat well-defined rim elevation).


Canyons on other planetary bodies

Venus has many craters and canyons on its surface. The troughs on the planet are part of a system of canyons that is more than 6 400 km long.