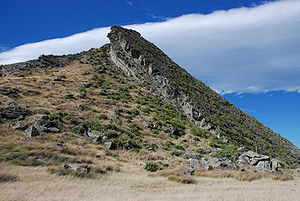 Tectonic uplift is a geological
Geology
Geology is the science comprising the study of solid Earth, the rocks of which it is composed, and the processes by which it evolves. Geology gives insight into the history of the Earth, as it provides the primary evidence for plate tectonics, the evolutionary history of life, and past climates...
process most often caused by plate tectonics
Plate tectonics
Plate tectonics is a scientific theory that describes the large scale motions of Earth's lithosphere...
which increases elevation. The opposite of uplift is subsidence
Subsidence
Subsidence is the motion of a surface as it shifts downward relative to a datum such as sea-level. The opposite of subsidence is uplift, which results in an increase in elevation...
, which results in a decrease in elevation. Uplift may be orogenic
Orogeny
Orogeny refers to forces and events leading to a severe structural deformation of the Earth's crust due to the engagement of tectonic plates. Response to such engagement results in the formation of long tracts of highly deformed rock called orogens or orogenic belts...
or isostatic.

Orogenic uplift is the result of tectonic-plate collisions and results in mountain ranges or a more modest uplift over a large region. The Himalayas
Himalayas
The Himalaya Range or Himalaya Mountains Sanskrit: Devanagari: हिमालय, literally "abode of snow"), usually called the Himalayas or Himalaya for short, is a mountain range in Asia, separating the Indian subcontinent from the Tibetan Plateau...
were (and are still being) formed by the collision of two continental plates, the Indian and Eurasian Plate
Eurasian Plate
The Eurasian Plate is a tectonic plate which includes most of the continent of Eurasia , with the notable exceptions of the Indian subcontinent, the Arabian subcontinent, and the area east of the Chersky Range in East Siberia...
s. This ongoing collision produced the Tibetan Plateau
Tibetan Plateau
The Tibetan Plateau , also known as the Qinghai–Tibetan Plateau is a vast, elevated plateau in Central Asia covering most of the Tibet Autonomous Region and Qinghai, in addition to smaller portions of western Sichuan, southwestern Gansu, and northern Yunnan in Western China and Ladakh in...
as well as the Himalayas and associated ranges. Ozark Plateau
The Ozarks
The Ozarks are a physiographic and geologic highland region of the central United States. It covers much of the southern half of Missouri and an extensive portion of northwestern and north central Arkansas...
is a broad uplifted area which resulted from the Ouachita Orogeny
Ouachita Mountains
The Ouachita Mountains are a mountain range in west central Arkansas and southeastern Oklahoma. The range's subterranean roots may extend as far as central Texas, or beyond it to the current location of the Marathon Uplift. Along with the Ozark Mountains, the Ouachita Mountains form the U.S...
to the south during the Permian
Permian
The PermianThe term "Permian" was introduced into geology in 1841 by Sir Sir R. I. Murchison, president of the Geological Society of London, who identified typical strata in extensive Russian explorations undertaken with Edouard de Verneuil; Murchison asserted in 1841 that he named his "Permian...
Period. Another related uplift is the Llano Uplift
Llano Uplift
The Llano Uplift is a roughly circular geologic dome of Precambrian rock, primarily granite, in Central Texas in the United States. It is located in the eastern region of the Edwards Plateau, west of the Texas Hill Country...
in Texas
Texas
Texas is the second largest U.S. state by both area and population, and the largest state by area in the contiguous United States.The name, based on the Caddo word "Tejas" meaning "friends" or "allies", was applied by the Spanish to the Caddo themselves and to the region of their settlement in...
, a geographical location named after its uplift features. The Colorado Plateau
Colorado Plateau
The Colorado Plateau, also called the Colorado Plateau Province, is a physiographic region of the Intermontane Plateaus, roughly centered on the Four Corners region of the southwestern United States. The province covers an area of 337,000 km2 within western Colorado, northwestern New Mexico,...
with its spectacular scenic canyons, the Grand Canyon
Grand Canyon
The Grand Canyon is a steep-sided canyon carved by the Colorado River in the United States in the state of Arizona. It is largely contained within the Grand Canyon National Park, the 15th national park in the United States...
, is also the result of broad tectonic uplift followed by river erosion.

Isostatic uplift includes the gradual uplift following rapid erosional
Erosion
Erosion is when materials are removed from the surface and changed into something else. It only works by hydraulic actions and transport of solids in the natural environment, and leads to the deposition of these materials elsewhere...
removal of material from a mountain range. The land rises as a result of the removal of the weight. Another example of isostatic uplift is post-glacial rebound
Post-glacial rebound
Post-glacial rebound is the rise of land masses that were depressed by the huge weight of ice sheets during the last glacial period, through a process known as isostasy...
following the melting of continental glacier
Glacier
A glacier is a large persistent body of ice that forms where the accumulation of snow exceeds its ablation over many years, often centuries. At least 0.1 km² in area and 50 m thick, but often much larger, a glacier slowly deforms and flows due to stresses induced by its weight...
s and ice sheets. The Hudson Bay
Hudson Bay
Hudson Bay , sometimes called Hudson's Bay, is a large body of saltwater in northeastern Canada. It drains a very large area, about , that includes parts of Ontario, Quebec, Saskatchewan, Alberta, most of Manitoba, southeastern Nunavut, as well as parts of North Dakota, South Dakota, Minnesota,...
region of Canada
Canada
Canada is a North American country consisting of ten provinces and three territories. Located in the northern part of the continent, it extends from the Atlantic Ocean in the east to the Pacific Ocean in the west, and northward into the Arctic Ocean...
and the Great Lakes
Great Lakes
The Great Lakes are a collection of freshwater lakes located in northeastern North America, on the Canada – United States border. Consisting of Lakes Superior, Michigan, Huron, Erie, and Ontario, they form the largest group of freshwater lakes on Earth by total surface, coming in second by volume...
of Canada and the United States
United States
The United States of America is a federal constitutional republic comprising fifty states and a federal district...
are currently undergoing gradual rebound as a result of the melting of the ice sheets 10,000 years ago.

In a few cases, tectonic uplift can be seen in the cases of coral island
Coral island
A coral island is the result of an atoll whose lagoon has dried up or been filled in with coral sand and detritus. This state is typically the last in the life cycle of an island, the first being volcanic and the second being an atoll. Most of the world's coral islands are in the Pacific Ocean...
s. This is evidenced by the presence of various oceanic islands composed entirely of coral
Coral
Corals are marine animals in class Anthozoa of phylum Cnidaria typically living in compact colonies of many identical individual "polyps". The group includes the important reef builders that inhabit tropical oceans and secrete calcium carbonate to form a hard skeleton.A coral "head" is a colony of...
, which otherwise appear to be high island
High island
In geology , a high island is an island of volcanic origin. The term can be used to distinguish such islands from low islands, whose origin is due to sedimentation or uplifting of coral reefs.-Definition and origin:...
s (i.e., islands of volcanic origin). Examples of such islands are found in the Pacific
Pacific Islands
The Pacific Islands comprise 20,000 to 30,000 islands in the Pacific Ocean. The islands are also sometimes collectively called Oceania, although Oceania is sometimes defined as also including Australasia and the Malay Archipelago....
, notably the three phosphate
Phosphate
A phosphate, an inorganic chemical, is a salt of phosphoric acid. In organic chemistry, a phosphate, or organophosphate, is an ester of phosphoric acid. Organic phosphates are important in biochemistry and biogeochemistry or ecology. Inorganic phosphates are mined to obtain phosphorus for use in...
islet
Islet
An islet is a very small island.- Types :As suggested by its origin as islette, an Old French diminutive of "isle", use of the term implies small size, but little attention is given to drawing an upper limit on its applicability....
s, Nauru
Nauru
Nauru , officially the Republic of Nauru and formerly known as Pleasant Island, is an island country in Micronesia in the South Pacific. Its nearest neighbour is Banaba Island in Kiribati, to the east. Nauru is the world's smallest republic, covering just...
, Makatea
Makatea
Makatea, or Mangaia-te-vai-tamae, is a raised coral atoll in the northwestern part of the Tuamotus. It is located 79 km southwest from Rangiroa to the west of the Palliser group. It is surrounded by spectacular cliffs, rising to a plateau 80 meters above the sea level. This island is...
, and Banaba
Banaba Island
Banaba Island , an island in the Pacific Ocean, is a solitary raised coral island west of the Gilbert Island chain and 300 km east of Nauru. It is part of the Republic of Kiribati. It has an area of 6.5 km², and the highest point on the island is also the highest point in Kiribati, at 81...
as well as Maré
Maré Island
Maré Island is the second-largest of the Loyalty Islands, in the archipelago of New Caledonia, an overseas territory of France in the Pacific Ocean. The island is part of the commune of Maré, in the Loyalty Islands Province of New Caledonia....
and Lifou
Lifou
Lifou is a commune in the Loyalty Islands Province of New Caledonia in the Pacific Ocean.-Geography:Lifou is made up of Lifou Island, the largest and most heavily populated of the Loyalty Islands, its smaller neighbour Tiga Island, and several uninhabited islets in between these two...
in New-Caledonia, Fatu Huku
Fatu Huku
Fatu Huku is a small island in the Marquesas Islands, nearly halfway between Hiva Oa and Nuku Hiva.Fatu Huku is located at 9.43°S latitude and 138.93°W longitude, and consists primarily of a high plateau that rises to 361 m ....
in the Marquesas Islands
Marquesas Islands
The Marquesas Islands enana and Te Fenua `Enata , both meaning "The Land of Men") are a group of volcanic islands in French Polynesia, an overseas collectivity of France in the southern Pacific Ocean. The Marquesas are located at 9° 00S, 139° 30W...
and Henderson Island
Henderson Island (Pitcairn Islands)
Henderson Island is an uninhabited raised coral atoll in the south Pacific Ocean, that in 1902 was annexed to the Pitcairn Islands colony, a South Pacific Dependent Territory of the United Kingdom. Measuring long and wide, it has an area of and is located northeast of Pitcairn Island at . The...
in the Pitcairn Islands
Pitcairn Islands
The Pitcairn Islands , officially named the Pitcairn, Henderson, Ducie and Oeno Islands, form a group of four volcanic islands in the southern Pacific Ocean. The islands are a British Overseas Territory and overseas territory of the European Union in the Pacific...
. The uplift of these islands is the result of the movement of oceanic tectonic plates. Sunken islands or guyot
Guyot
A guyot , also known as a tablemount, is an isolated underwater volcanic mountain , with a flat top over 200 meters below the surface of the sea. The diameters of these flat summits can exceed ....
s with their coral reefs are the result of crustal subsidence as the oceanic plate carries the islands to deeper or lower oceanic crust areas.
The source of this article is wikipedia, the free encyclopedia.  The text of this article is licensed under the GFDL.