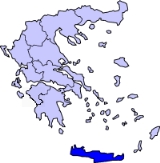 Overview
Crete is the largest and most populous of the Greek islands, the fifth largest island in the Mediterranean Sea
Mediterranean Sea
The Mediterranean Sea is a sea connected to the Atlantic Ocean surrounded by the Mediterranean region and almost completely enclosed by land: on the north by Anatolia and Europe, on the south by North Africa, and on the east by the Levant...
, and one of the thirteen administrative regions of Greece. It forms a significant part of the economy and cultural heritage of Greece while retaining its own local cultural traits (such as its own dialect, poetry
Mantinada
A mantinada, — are Cretan rhyming couplets, typically improvised during dance music. Rhymed Cretan poetry of the Renaissance, especially verse epic Erotokritos, are reminiscent of the mantinada, and couplets from Erotokritos have become used as mantinades. Mantinades have either love or...
, and music).

1898    700 Greek civilians, 17 British guards and the British Consul of Crete are killed by a Turkish mob in Heraklion, Greece.

1900    Sir Arthur Evans purchases the land around the ruins of Knossos, the largest Bronze Age archaeological site on Crete.

1905    Eleftherios Venizelos calls for Crete's union with Greece, and begins what is to be known as the Theriso revolt.

1913    Crete, having obtained self rule from Turkey after the First Balkan War, is annexed by Greece.