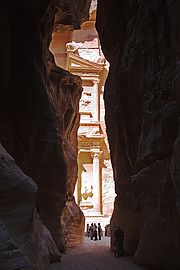 al-Siq (translated: the shaft) is the main entrance to the ancient city of Petra
Petra
Petra is a historical and archaeological city in the Jordanian governorate of Ma'an that is famous for its rock cut architecture and water conduits system. Established sometime around the 6th century BC as the capital city of the Nabataeans, it is a symbol of Jordan as well as its most visited...
in southern Jordan
Jordan
Jordan , officially the Hashemite Kingdom of Jordan , Al-Mamlaka al-Urduniyya al-Hashemiyya) is a kingdom on the East Bank of the River Jordan. The country borders Saudi Arabia to the east and south-east, Iraq to the north-east, Syria to the north and the West Bank and Israel to the west, sharing...
. The dim, narrow gorge (in some points no more than 3 meters wide) winds its way approximately one mile and ends at Petra's most elaborate ruin, Al Khazneh (The Treasury).

The Siq is a natural geological fault produced by tectonic forces and worn smooth by water erosion. The walls that enclose the Siq stand between 91–182 meters (300–600 feet) in height.

The entrance to the Siq contains a huge dam, reconstructed in 1963 and again in 1991, designed to bar the mouth of the Siq and reroute the waters of Wadi Musa
Wadi Musa
Wadi Musa, , is the name of a town located in the Ma'an Governorate in southern Jordan east of Petra at latitude 30.317N and longitude 35.483E....
. The dam is a fairly true reconstruction of what the Nabataeans
Nabataeans
Thamudi3.jpgThe Nabataeans, also Nabateans , were ancient peoples of southern Canaan and the northern part of Arabia, whose oasis settlements in the time of Josephus , gave the name of Nabatene to the borderland between Syria and Arabia, from the Euphrates to the Red Sea...
did to control Wadi Musa between the 1st century BC and the beginning of the 1st century AD. The entrance also contains the remnants of a monumental arch, of which only the two abutments and some hewn stones of the arch itself have survived. The arch collapsed in 1896 following an earthquake, but its appearance is known based on the lithograph works of David Roberts
David Roberts (painter)
David Roberts RA was a Scottish painter. He is especially known for a prolific series of detailed lithograph prints of Egypt and the Near East that he produced during the 1840s from sketches he made during long tours of the region . These, and his large oil paintings of similar subjects, made him...
.

The Siq was used as the grand caravan entrance into Petra. Along both walls of the fissure are a number of votive niches containing baetyli
Baetylus
Baetylus is a Semitic word denoting a sacred stone, which was supposedly endowed with life. According to ancient sources, these objects of worship were meteorites, which were dedicated to the gods or revered as symbols of the gods themselves...
, which suggest that the Siq was sacred to the Nabatean people. In 1998, a group of statues were uncovered when digging was conducted to lower the road by more than six feet. Although the upper part is greatly eroded, it is still possible to recognize the figures of two merchants, each leading two camels. The figures are almost twice lifesize.

Along the Siq are some underground chambers, the function of which has not yet been clarified. The possibility that they were tombs has been excluded and archaeologist find it difficult to believe that they were dwellings. The majority consensus is that they housed the guards that defended the main entrance to Petra.