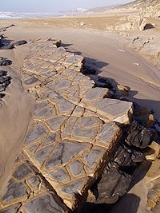 Overview
Limestone is a sedimentary rock
Sedimentary rock
Sedimentary rock are types of rock that are formed by the deposition of material at the Earth's surface and within bodies of water. Sedimentation is the collective name for processes that cause mineral and/or organic particles to settle and accumulate or minerals to precipitate from a solution....
composed largely of the minerals calcite
Calcite
Calcite is a carbonate mineral and the most stable polymorph of calcium carbonate . The other polymorphs are the minerals aragonite and vaterite. Aragonite will change to calcite at 380-470°C, and vaterite is even less stable.-Properties:...
and aragonite
Aragonite
Aragonite is a carbonate mineral, one of the two common, naturally occurring, crystal forms of calcium carbonate, CaCO3...
, which are different crystal forms of calcium carbonate
Calcium carbonate
Calcium carbonate is a chemical compound with the formula CaCO3. It is a common substance found in rocks in all parts of the world, and is the main component of shells of marine organisms, snails, coal balls, pearls, and eggshells. Calcium carbonate is the active ingredient in agricultural lime,...
(CaCO3). Many limestones are composed from skeletal fragments of marine organisms such as coral
Coral
Corals are marine animals in class Anthozoa of phylum Cnidaria typically living in compact colonies of many identical individual "polyps". The group includes the important reef builders that inhabit tropical oceans and secrete calcium carbonate to form a hard skeleton.A coral "head" is a colony of...
or foraminifera
Foraminifera
The Foraminifera , or forams for short, are a large group of amoeboid protists which are among the commonest plankton species. They have reticulating pseudopods, fine strands of cytoplasm that branch and merge to form a dynamic net...
.

Limestone makes up about 10% of the total volume of all sedimentary rocks. The solubility
Solubility
Solubility is the property of a solid, liquid, or gaseous chemical substance called solute to dissolve in a solid, liquid, or gaseous solvent to form a homogeneous solution of the solute in the solvent. The solubility of a substance fundamentally depends on the used solvent as well as on...
of limestone in water and weak acid solutions leads to karst
KARST
Kilometer-square Area Radio Synthesis Telescope is a Chinese telescope project to which FAST is a forerunner. KARST is a set of large spherical reflectors on karst landforms, which are bowlshaped limestone sinkholes named after the Kras region in Slovenia and Northern Italy. It will consist of...
landscapes, in which water erodes the limestone over thousands to millions of years.

How many years limestone quarry used in cement raw material to be abandon.If limestone in earth or quarry area will be empted in future

What is the limestone landform process explin this?
More

What are the physical properties of limestone