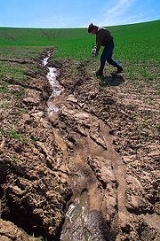 Overview
Erosion is when materials are removed from the surface and changed into something else. It only works by hydraulic actions and transport of solids (sediment
Sediment
Sediment is naturally occurring material that is broken down by processes of weathering and erosion, and is subsequently transported by the action of fluids such as wind, water, or ice, and/or by the force of gravity acting on the particle itself....
, soil
Soil
Soil is a natural body consisting of layers of mineral constituents of variable thicknesses, which differ from the parent materials in their morphological, physical, chemical, and mineralogical characteristics...
, rock
Rock (geology)
In geology, rock or stone is a naturally occurring solid aggregate of minerals and/or mineraloids.The Earth's outer solid layer, the lithosphere, is made of rock. In general rocks are of three types, namely, igneous, sedimentary, and metamorphic...
and other particles) in the natural environment, and leads to the deposition of these materials elsewhere. It usually occurs due to transport
Sediment transport
Sediment transport is the movement of solid particles , typically due to a combination of the force of gravity acting on the sediment, and/or the movement of the fluid in which the sediment is entrained...
by wind, water, or ice; by down-slope creep
Downhill creep
Downhill creep, or commonly just creep, is the slow downward progression of rock and soil down a low grade slope; it can also refer to slow deformation of such materials as a result of prolonged pressure and stress. Creep may appear to an observer to be continuous, but it really is the sum of...
of soil and other material under the force of gravity; or by living organisms, such as burrowing animals, in the case of bioerosion
Bioerosion
Bioerosion describes the erosion of hard ocean substrates – and less often terrestrial substrates – by living organisms. Marine bioerosion can be caused by mollusks, polychaete worms, phoronids, sponges, crustaceans, echinoids, and fish; it can occur on coastlines, on coral reefs, and...
.

Although erosion is a natural process human land use
Land use
Land use is the human use of land. Land use involves the management and modification of natural environment or wilderness into built environment such as fields, pastures, and settlements. It has also been defined as "the arrangements, activities and inputs people undertake in a certain land cover...
policies also have had an effect on erosion, especially industrial agriculture
Industrial agriculture
Industrial farming is a form of modern farming that refers to the industrialized production of livestock, poultry, fish, and crops. The methods of industrial agriculture are technoscientific, economic, and political...
, deforestation
Deforestation
Deforestation is the removal of a forest or stand of trees where the land is thereafter converted to a nonforest use. Examples of deforestation include conversion of forestland to farms, ranches, or urban use....
, and urban sprawl
Urban sprawl
Urban sprawl, also known as suburban sprawl, is a multifaceted concept, which includes the spreading outwards of a city and its suburbs to its outskirts to low-density and auto-dependent development on rural land, high segregation of uses Urban sprawl, also known as suburban sprawl, is a...
.

Hurricane Irene and Tropical Depression Lee left me with a large eroded spot on my lawn and I am not sure how to repair it. It is rather deep - about ...

How does erosion occur?

What are some of the causes of erosion?

What are the effects of erosion?
More
x