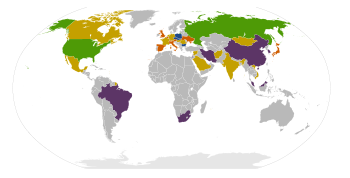 Since the first human spaceflight
Human spaceflight
Human spaceflight is spaceflight with humans on the spacecraft. When a spacecraft is manned, it can be piloted directly, as opposed to machine or robotic space probes and remotely-controlled satellites....
by the Soviet Union
Soviet Union
The Soviet Union , officially the Union of Soviet Socialist Republics , was a constitutionally socialist state that existed in Eurasia between 1922 and 1991....
, citizens of 38 countries have flown in space. For each nationality, the launch date of the first mission is listed. The list is based on the nationality of the person at the time of the spaceflight. Only 3 of the 38 "first flyers" have been women (Sharman in 1991, Ansari in 2006, Yi in 2008). Only three nations (Soviet Union, U.S., China) have launched their own manned spacecraft, with the Soviets/Russians and the American programs providing rides to other nations' astronauts. Twenty-four "first flights" occurred on Soviet or Russian flights while the United States carried thirteen.

Note: All dates given are UTC
Coordinated Universal Time
Coordinated Universal Time is the primary time standard by which the world regulates clocks and time. It is one of several closely related successors to Greenwich Mean Time. Computer servers, online services and other entities that rely on having a universally accepted time use UTC for that purpose...
. Countries indicated in bold have independent human spaceflight capability.

The above list uses the nationality at the time of launch. Lists with differing criteria might include the following people: