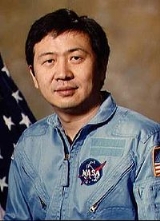 Encyclopedia
Taylor Gun-Jin Wang (born June 16, 1940) is an American
United States
The United States of America is a federal constitutional republic comprising fifty states and a federal district...
scientist and in 1985, became the first ethnic Chinese person to go into space. While an employee of the Jet Propulsion Laboratory
Jet Propulsion Laboratory
Jet Propulsion Laboratory is a federally funded research and development center and NASA field center located in the San Gabriel Valley area of Los Angeles County, California, United States. The facility is headquartered in the city of Pasadena on the border of La Cañada Flintridge and Pasadena...
, Wang was a payload specialist
Payload Specialist
A Payload Specialist ' was an individual selected and trained by commercial or research organizations for flights of a specific payload on a NASA Space Shuttle mission...
on the Space Shuttle Challenger
Space Shuttle Challenger
Space Shuttle Challenger was NASA's second Space Shuttle orbiter to be put into service, Columbia having been the first. The shuttle was built by Rockwell International's Space Transportation Systems Division in Downey, California...
mission STS-51-B
STS-51-B
STS 51-B was the seventeenth flight of NASA's Space Shuttle program, and the seventh flight of Space Shuttle Challenger. The launch of Challenger on 29 April 1985 was delayed by 2 minutes and 18 seconds, due to a launch processing failure. Challenger was initially rolled out to the pad to launch on...
.

With ancestry in Yancheng
Yancheng
Yancheng is a prefecture-level city in northeastern Jiangsu province, People's Republic of China. The city with the largest jurisdiction area in Jiangsu, Yancheng borders Lianyungang to the north, Huai'an to the west, Yangzhou and Taizhou to the southwest, Nantong to the south, and looks out to...
, Jiangsu
Jiangsu
' is a province of the People's Republic of China, located along the east coast of the country. The name comes from jiang, short for the city of Jiangning , and su, for the city of Suzhou. The abbreviation for this province is "苏" , the second character of its name...
, China
China
Chinese civilization may refer to:* China for more general discussion of the country.* Chinese culture* Greater China, the transnational community of ethnic Chinese.* History of China* Sinosphere, the area historically affected by Chinese culture...
, Wang was born in Jiangxi
Jiangxi
' is a southern province in the People's Republic of China. Spanning from the banks of the Yangtze River in the north into hillier areas in the south, it shares a border with Anhui to the north, Zhejiang to the northeast, Fujian to the east, Guangdong to the south, Hunan to the west, and Hubei to...
to Wang Zhang (王章) and Yu Jiehong (俞潔虹). He moved to Taiwan
Taiwan
Taiwan , also known, especially in the past, as Formosa , is the largest island of the same-named island group of East Asia in the western Pacific Ocean and located off the southeastern coast of mainland China. The island forms over 99% of the current territory of the Republic of China following...
in 1952 with his family. He studied his later part of elementary school
Elementary school
An elementary school or primary school is an institution where children receive the first stage of compulsory education known as elementary or primary education. Elementary school is the preferred term in some countries, particularly those in North America, where the terms grade school and grammar...
in Kaohsiung
Kaohsiung
Kaohsiung is a city located in southwestern Taiwan, facing the Taiwan Strait on the west. Kaohsiung, officially named Kaohsiung City, is divided into thirty-eight districts. The city is one of five special municipalities of the Republic of China...
, and graduated from The Affiliated Senior High School of National Taiwan Normal University
The Affiliated Senior High School of National Taiwan Normal University
The Affiliated Senior High School of National Taiwan Normal University , is considered a top school among Taiwan's high schools. It is ranked second among all the senior high schools in Taiwan, with requirement of PR99 and 98 on the National Senior High School Entrance Exams...
in Taipei
Taipei
Taipei City is the capital of the Republic of China and the central city of the largest metropolitan area of Taiwan. Situated at the northern tip of the island, Taipei is located on the Tamsui River, and is about 25 km southwest of Keelung, its port on the Pacific Ocean...
. He later moved to Hong Kong
Hong Kong
Hong Kong is one of two Special Administrative Regions of the People's Republic of China , the other being Macau. A city-state situated on China's south coast and enclosed by the Pearl River Delta and South China Sea, it is renowned for its expansive skyline and deep natural harbour...
. He started studying physics in UCLA in 1963, and received his Bachelor of Science B.S. in 1967, and his Master of Science M.S. in 1968, and his doctoral in low temperature physics - Superfluid and solid state physics in 1971.

After completing his doctorate, Wang joined the California Institute of Technology
California Institute of Technology
The California Institute of Technology is a private research university located in Pasadena, California, United States. Caltech has six academic divisions with strong emphases on science and engineering...
's Jet Propulsion Laboratory
Jet Propulsion Laboratory
Jet Propulsion Laboratory is a federally funded research and development center and NASA field center located in the San Gabriel Valley area of Los Angeles County, California, United States. The facility is headquartered in the city of Pasadena on the border of La Cañada Flintridge and Pasadena...
(JPL) in 1972, as a senior scientist. At JPL he was responsible for the inception and development of containerless processing science and technology research. He was the Principal Investigator (PI) on the Spacelab 3 mission NASA Drop Dynamics (DDM) experiments, PI on the NASA SPAR Flight Experiment #77-18 "Dynamics of Liquid Bubble," PI on the NASA SPAR Flight Experiment #76-20 "Containerless Processing Technology," and PI on the Department of Energy Experiment "Spherical Shell Technology."

He gained US citizenship
Citizenship
Citizenship is the state of being a citizen of a particular social, political, national, or human resource community. Citizenship status, under social contract theory, carries with it both rights and responsibilities...
in 1975, and published a paper on dynamic behavior of rotating spheroids in zero gravity
Weightlessness
Weightlessness is the condition that exists for an object or person when they experience little or no acceleration except the acceleration that defines their inertial trajectory, or the trajectory of pure free-fall...
the next year. The paper received attention in NASA
NASA
The National Aeronautics and Space Administration is the agency of the United States government that is responsible for the nation's civilian space program and for aeronautics and aerospace research...
, and Wang was selected as a payload specialist on June 1, 1983 for the Spacelab-3
Spacelab
Spacelab was a reusable laboratory used on certain spaceflights flown by the Space Shuttle. The laboratory consisted of multiple components, including a pressurized module, an unpressurized carrier and other related hardware housed in the Shuttle's cargo bay...
mission.

Wang conducted precursor drop dynamics experiments for the DDM in ground-based laboratories employing acoustic levitation systems, neutral buoyancy systems and drop towers, and in the near weightless environment provided by JSC's KC-135 airplane flights and SPAR rockets. These flights have helped to define the experimental parameters and procedures in the DDM experiments performed on Spacelab 3. He is the inventor of the acoustic levitation and manipulation chamber for the DDM.

The launch was flawless; all systems were “go”, except for Dr. Wang’s experiment. His experimental apparatus developed a malfunction. The possibility of going home empty handed saddened him. As the first person of Chinese descent to go into Space, the Chinese American community had taken a keen interest in his mission.

He asked mission-control’s permission to repair his instrument, and they denied his request—for good reasons. He understood NASA’s point of view, but, in a total desperation, he said, “If you guys don’t give me a chance to repair my instrument, I’m not going back.”

Fortunately for him, NASA decided not to call his bluff, and granted him a chance to repair his instruments. Working around the clock, and around the Earth, he repaired the instrument, and the experiment was a success - it continues to contribute his current research interest.

At mission conclusion, Wang traveled over 2.9 million miles in 110 Earth orbits, and logged over 168 hours in space. By all accounts, it was a successful mission. However, the mission had a close call, STS-51B mission commander Overmyer discovered while serving on the Challenger accident investigation team that 51-B had had a similar problem with its O-rings during the launch. Morton Thiokol engineers told STS-51B crew, Don Lind that "you all came within three-tenths of one second of dying".

Utilizing insights from compound droplet experiments performed in the microgravity of NASA Shuttle Mission STS-51-B, Dr. Taylor Wang, has developed an immunoisolation
Immunoisolate
In general, immunoisolation is the process of protecting implanted material such as biopolymers, cells, or drug release carriers from an immune reaction. The most prominent means of accomplishing this is through the use of encapsulation....
encapsulation system that protects cellular transplants, and sustains cell function — without immunosuppression drugs and their resulting negative side effects. This novel immunoisolation system is a multi-component, multi-membrane capsule that allows independent optimization of all capsule design parameters ensuring reproducible functions in large animals and humans. Results of Encapsulife's successful large animal trials, have recently been published in peer-reviewed research in Transplantation Journal. In this landmark research, encapsulated canine pancreatic islets were transplanted into dogs rendered diabetic by total pancreatectomy. No immunosuppression or anti-inflammatory therapy was used. The allotransplantations of encapsulated islets were well tolerated and biocompatible, and normalized fasting blood glucose levels in all of 9 dogs, were achieved for over two hundred days, with a single transplantation. Re-transplantation of encapsulated islets — a "booster" — was effective in providing glycemic control beyond the initial 200 days. .

Wang later became a Centennial Professor at Vanderbilt University
Vanderbilt University
Vanderbilt University is a private research university located in Nashville, Tennessee, United States. Founded in 1873, the university is named for shipping and rail magnate "Commodore" Cornelius Vanderbilt, who provided Vanderbilt its initial $1 million endowment despite having never been to the...
in Nashville, Tennessee
Tennessee
Tennessee is a U.S. state located in the Southeastern United States. It has a population of 6,346,105, making it the nation's 17th-largest state by population, and covers , making it the 36th-largest by total land area...
. He has written about 200 journal articles and holds 28 U.S. patents on acoustics, drop and bubble dynamics, collision and coalescence
Coalescence (meteorology)
Coalescence is the process by which two or more droplets, bubbles or particles merge during contact to form a single daughter droplet, bubble or particle. It can take place in many processes, ranging from meteorology to astrophysics. For example, it is both inve formation of raindrops as well as...
of drops, charged drop dynamics, containerless science, and encapsulation of living cells. His experiments were carried out in 1992 in United States Microgravity Laboratory 1 (USML-1), and in 1995 aboard USML-2.