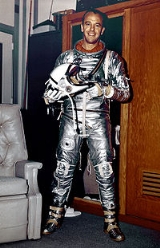 Overview
Alan Bartlett Shepard, Jr. (November 18, 1923 – July 21, 1998) was an American naval aviator, test pilot, flag officer, and NASA
NASA
The National Aeronautics and Space Administration is the agency of the United States government that is responsible for the nation's civilian space program and for aeronautics and aerospace research...
astronaut
Astronaut
An astronaut or cosmonaut is a person trained by a human spaceflight program to command, pilot, or serve as a crew member of a spacecraft....
who in 1961 became the second person, and the first American, in space. This Mercury flight was designed to enter space, but not to achieve orbit. Ten years later, at age 47 the oldest astronaut in the program, Shepard commanded the Apollo 14
Apollo 14
Apollo 14 was the eighth manned mission in the American Apollo program, and the third to land on the Moon. It was the last of the "H missions", targeted landings with two-day stays on the Moon with two lunar EVAs, or moonwalks....
mission, piloting the lander to the most accurate landing of the Apollo missions.

I know you're all saying I can go to the moon but I can't find Pasadena.

When Shepard arrived a half-hour late to a book signing of Moon Shot|Moon Shot: The Inside Story of America's Race to the Moon &mdash; reported in Sun-Sentinel wire services (June 19, 1995) "Astronaut Late to Signing", Sun-Sentinel|Sun-Sentinel, p. 2A.

There were similarities between these two incidents. The similarity was too much success ... over-confidence and complacency, quite frankly.

I realized up there that our planet is not infinite. It's fragile. That may not be obvious to a lot of folks, and it's tough that people are fighting each other here on Earth instead of trying to get together and live on this planet. We look pretty vulnerable in the darkness of space.

I guess those of us who have been with NASA ... kind of understand the tremendous excitement and thrills and celebrations and national pride that went with the Apollo program is just something you're not going to create again, probably until we go to Mars.

We need a continuing presence in space.

I think about the personal accomplishment, but there's more of a sense of the grand achievement by all the people who could put this man on the moon.

I can hit it farther on the moon. But actually, my swing is better here on Earth.

If we had said 30 years ago that we were going to have only two incidents with casualties, we would have thought, 'Boy, that's great. To me, that indicates that the program has really exceeded what the early expectations were.

No way that any astronaut worth his salt volunteered for the space program to become a hero. You don't select astronauts who want fame and fortune. You select them because they're the best test pilots in the world, they know it, and it's a personal challenge for them. And the astronauts of today are exactly the same.