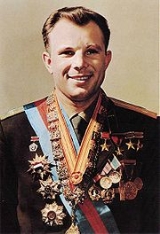 Overview
Yuri Alekseyevich Gagarin was a Soviet
Soviet Air Force
The Soviet Air Force, officially known in Russian as Военно-воздушные силы or Voenno-Vozdushnye Sily and often abbreviated VVS was the official designation of one of the air forces of the Soviet Union. The other was the Soviet Air Defence Forces...
pilot and cosmonaut. He was the first human to journey into outer space
Outer space
Outer space is the void that exists between celestial bodies, including the Earth. It is not completely empty, but consists of a hard vacuum containing a low density of particles: predominantly a plasma of hydrogen and helium, as well as electromagnetic radiation, magnetic fields, and neutrinos....
, when his Vostok spacecraft
Spacecraft
A spacecraft or spaceship is a craft or machine designed for spaceflight. Spacecraft are used for a variety of purposes, including communications, earth observation, meteorology, navigation, planetary exploration and transportation of humans and cargo....
completed an orbit
Orbit
In physics, an orbit is the gravitationally curved path of an object around a point in space, for example the orbit of a planet around the center of a star system, such as the Solar System...
of the Earth
Earth
Earth is the third planet from the Sun, and the densest and fifth-largest of the eight planets in the Solar System. It is also the largest of the Solar System's four terrestrial planets...
on April 12, 1961.

What were the important things he had done

What were their lifes like when he was young
More
x