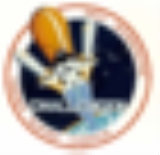 Encyclopedia
STS-9 was a NASA
NASA
The National Aeronautics and Space Administration is the agency of the United States government that is responsible for the nation's civilian space program and for aeronautics and aerospace research...
Space Shuttle
Space Shuttle
The Space Shuttle was a manned orbital rocket and spacecraft system operated by NASA on 135 missions from 1981 to 2011. The system combined rocket launch, orbital spacecraft, and re-entry spaceplane with modular add-ons...
mission which carried the first Spacelab
Spacelab
Spacelab was a reusable laboratory used on certain spaceflights flown by the Space Shuttle. The laboratory consisted of multiple components, including a pressurized module, an unpressurized carrier and other related hardware housed in the Shuttle's cargo bay...
module into orbit to conduct space-based scientific experiments. It was the sixth mission of the Space Shuttle Columbia
Space Shuttle Columbia
Space Shuttle Columbia was the first spaceworthy Space Shuttle in NASA's orbital fleet. First launched on the STS-1 mission, the first of the Space Shuttle program, it completed 27 missions before being destroyed during re-entry on February 1, 2003 near the end of its 28th, STS-107. All seven crew...
, and was Columbia's last flight until STS-61-C
STS-61-C
-Mission parameters:*Mass:**Orbiter liftoff: **Orbiter landing: **Payload: *Perigee: *Apogee: *Inclination: 28.5°*Period: 91.2 min-Mission background:...
in January 1986. It was also the last time the old STS numbering was used until STS-26
STS-26
STS-26 was the 26th NASA Space Shuttle mission and the seventh flight of the Discovery orbiter. The mission launched from Kennedy Space Center, Florida, on 29 September 1988, and landed four days later on 3 October. STS-26 was declared the "Return to Flight" mission, being the first mission after...
(in the aftermath of the Challenger disaster
Space Shuttle Challenger disaster
The Space Shuttle Challenger disaster occurred on January 28, 1986, when Space Shuttle Challenger broke apart 73 seconds into its flight, leading to the deaths of its seven crew members. The spacecraft disintegrated over the Atlantic Ocean, off the coast of central Florida at 11:38 am EST...
of STS-51-L
STS-51-L
STS-51-L was the twenty-fifth flight of the American Space Shuttle program, which marked the first time an ordinary civilian, schoolteacher Christa McAuliffe, had flown aboard the Space Shuttle. The mission used Space Shuttle Challenger, which lifted off from the Launch Complex 39-B on 28 January...
). Under the new system, STS-9 would have been designated as STS-41-A. 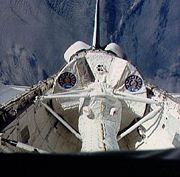 STS-9's six-member crew, the largest of any manned space mission at the time, included John W. Young, commander, on his second shuttle flight; Brewster H. Shaw, pilot; Owen Garriott and Robert A. Parker, both mission specialists; and Byron K. Lichtenberg and Ulf Merbold, payload specialists - the first two non-NASA astronaut
Astronaut
An astronaut or cosmonaut is a person trained by a human spaceflight program to command, pilot, or serve as a crew member of a spacecraft....
s to fly on the Space Shuttle. Merbold, a citizen of West Germany
West Germany
West Germany is the common English, but not official, name for the Federal Republic of Germany or FRG in the period between its creation in May 1949 to German reunification on 3 October 1990....
, was the first foreign citizen to participate in a shuttle flight. Lichtenberg was a researcher at the Massachusetts Institute of Technology
Massachusetts Institute of Technology
The Massachusetts Institute of Technology is a private research university located in Cambridge, Massachusetts. MIT has five schools and one college, containing a total of 32 academic departments, with a strong emphasis on scientific and technological education and research.Founded in 1861 in...
. Prior to STS-9, scientist-astronaut Garriott had spent 56 days in orbit in 1973 aboard Skylab
Skylab
Skylab was a space station launched and operated by NASA, the space agency of the United States. Skylab orbited the Earth from 1973 to 1979, and included a workshop, a solar observatory, and other systems. It was launched unmanned by a modified Saturn V rocket, with a mass of...
.

The original launch date of 29 October 1983 was scrubbed due to concerns with the exhaust nozzle on the right solid rocket booster
Solid rocket booster
Solid rocket boosters or Solid Rocket Motors, SRM, are used to provide thrust in spacecraft launches from the launchpad up to burnout of the SRBs. Many launch vehicles include SRBs, including the Ariane 5, Atlas V , and the NASA Space Shuttle...
(SRB). For the first time in the history of the shuttle program, the shuttle stack was rolled back to the Vehicle Assembly Building
Vehicle Assembly Building
The Vehicle Assembly Building, or VAB, at NASA's Kennedy Space Center was used to assemble and house American manned launch vehicles from 1968-2011. It is the fourth largest building in the world by volume...
(VAB), where it was destacked and the orbiter returned to the orbiter processing facility, while the suspect booster underwent repairs. The shuttle was restacked and returned to the launch pad on 8 November 1983.

STS-9 launched successfully from Kennedy Space Center
Kennedy Space Center
The John F. Kennedy Space Center is the NASA installation that has been the launch site for every United States human space flight since 1968. Although such flights are currently on hiatus, KSC continues to manage and operate unmanned rocket launch facilities for America's civilian space program...
at 11 am EST on 28 November 1983.

The shuttle's crew was divided into two teams, each working 12-hour shifts for the duration of the mission. Young, Parker and Merbold formed the Red Team, while Shaw, Garriott and Lichtenberg made up the Blue Team. Usually, the commander and the pilot team members were assigned to the flight deck, while the mission and payload specialists worked inside the Spacelab.

Over the course of the mission, seventy-two scientific experiments were carried out, spanning the fields of atmospheric and plasma physics, astronomy
Astronomy
Astronomy is a natural science that deals with the study of celestial objects and phenomena that originate outside the atmosphere of Earth...
, solar physics
Solar physics
For the physics journal, see Solar Physics Solar physics is the study of our Sun. It is a branch of astrophysics that specializes in exploiting and explaining the detailed measurements that are possible only for our closest star...
, material sciences, technology, life sciences and Earth observation
Earth observation
Earth observation is the gathering of information about planet Earth’s physical, chemical and biological systems. It is used to monitor and assess the status of, and changes in, the natural environment and the built environment. In recent years, Earth observation has become technologically more and...
s. The Spacelab effort went so well that the mission was extended an additional day to 10 days, making it the longest-duration shuttle flight at that time.

During orbiter orientation, four hours before re-entry, one of the flight control
Fly-by-wire
Fly-by-wire is a system that replaces the conventional manual flight controls of an aircraft with an electronic interface. The movements of flight controls are converted to electronic signals transmitted by wires , and flight control computers determine how to move the actuators at each control...
computers crashed when the RCS
Reaction control system
A reaction control system is a subsystem of a spacecraft whose purpose is attitude control and steering by the use of thrusters. An RCS system is capable of providing small amounts of thrust in any desired direction or combination of directions. An RCS is also capable of providing torque to allow...
thrusters were fired. A few minutes later, a second crashed in a similar fashion, but was successfully rebooted. Young delayed the landing, letting the orbiter drift. He later testified: "Had we then activated the Backup Flight Software, loss of vehicle and crew would have resulted." Post-flight analysis revealed the GPCs failed when the RCS thruster motion knocked a piece of solder
Solder
Solder is a fusible metal alloy used to join together metal workpieces and having a melting point below that of the workpiece.Soft solder is what is most often thought of when solder or soldering are mentioned and it typically has a melting range of . It is commonly used in electronics and...
loose and shorted out the CPU board.

Columbia landed on Runway 17 at Edwards Air Force Base
Edwards Air Force Base
Edwards Air Force Base is a United States Air Force base located on the border of Kern County, Los Angeles County, and San Bernardino County, California, in the Antelope Valley. It is southwest of the central business district of North Edwards, California and due east of Rosamond.It is named in...
on 8 December 1983, at 15:47 pm PST
Pacific Time Zone
The Pacific Time Zone observes standard time by subtracting eight hours from Coordinated Universal Time . The clock time in this zone is based on the mean solar time of the 120th meridian west of the Greenwich Observatory. During daylight saving time, its time offset is UTC-7.In the United States...
, having completed 166 orbits and travelled 4.3 million miles over the course of its mission. Right before landing, two of the orbiter's three auxiliary power unit
Auxiliary power unit
An auxiliary power unit is a device on a vehicle that provides energy for functions other than propulsion. They are commonly found on large aircraft, as well as some large land vehicles.-Function:...
s caught fire due to a hydrazine
Hydrazine
Hydrazine is an inorganic compound with the formula N2H4. It is a colourless flammable liquid with an ammonia-like odor. Hydrazine is highly toxic and dangerously unstable unless handled in solution. Approximately 260,000 tons are manufactured annually...
leak, but the orbiter nonetheless landed successfully. Columbia was ferried back to KSC on 15 December. The leak was later discovered after it had burned itself out and caused major damage to the compartment.

The major payload of the flight, Spacelab
Spacelab
Spacelab was a reusable laboratory used on certain spaceflights flown by the Space Shuttle. The laboratory consisted of multiple components, including a pressurized module, an unpressurized carrier and other related hardware housed in the Shuttle's cargo bay...
1, is depicted in the payload bay of the Columbia
Space Shuttle Columbia
Space Shuttle Columbia was the first spaceworthy Space Shuttle in NASA's orbital fleet. First launched on the STS-1 mission, the first of the Space Shuttle program, it completed 27 missions before being destroyed during re-entry on February 1, 2003 near the end of its 28th, STS-107. All seven crew...
. The nine stars and the path of the orbiter indicate the flight's numerical designation, STS-9.