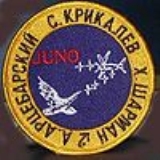 Soyuz TM-11 was launched the same day as STS-35
STS-35
-Crew notes:Prior to the Challenger disaster, this mission was slated to launch in March 1986 as STS-61-E. Jon McBride was originally assigned to command this mission, which would have been his second spaceflight. He chose to retire from NASA in May 1989 and was replaced as mission commander by...
.

11th expedition to Mir
Mir
Mir was a space station operated in low Earth orbit from 1986 to 2001, at first by the Soviet Union and then by Russia. Assembled in orbit from 1986 to 1996, Mir was the first modular space station and had a greater mass than that of any previous spacecraft, holding the record for the...
. Toyohiro Akiyama was a reporter/space tourist for a Japanese television network.

Spent 175 days docked to Mir. Its launch shroud and Soyuz booster were painted with the Japanese flag and advertisements. A camera inside the descent module filmed the cosmonauts during ascent for Akiyama’s network.

Viktor Afanaseyev, Musa Manarov (on his second Mir visit), and Japanese television journalist Toyohiro Akiyama were welcomed aboard Mir by Soviet cosmonauts. Akiyama’s network, the Tokyo Broadcasting System (TBS), paid for the flight. The Soviets called this their first commercial spaceflight and claimed to have earned $14 million. The journalist was scheduled to make one 10-min TV broadcast and two 20-min radio broadcasts each day. Electrical power and video and TV system incompatibilities forced the Japanese to make extensive use of converters. His equipment, which weighed about 170 kg, was delivered by Progress-M spacecraft and set up in advance by Manakov and Strekalov. On December 5 Akiyama’s couch was transferred to Soyuz-TM 10. On December 8 Manakov and Strekalov commenced loading Soyuz-TM 10’s descent module with film and experiment results. TBS broadcast Akiyama’s landing live from Kazakhstan.
The source of this article is wikipedia, the free encyclopedia.  The text of this article is licensed under the GFDL.