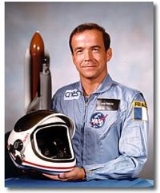 Encyclopedia
Patrick Pierre Roger Baudry (born March 6, 1946 in Cameroon
Cameroon
Cameroon, officially the Republic of Cameroon , is a country in west Central Africa. It is bordered by Nigeria to the west; Chad to the northeast; the Central African Republic to the east; and Equatorial Guinea, Gabon, and the Republic of the Congo to the south. Cameroon's coastline lies on the...
, then a French colony), is a retired Lieutenant Colonel in the French Air Force
French Air Force
The French Air Force , literally Army of the Air) is the air force of the French Armed Forces. It was formed in 1909 as the Service Aéronautique, a service arm of the French Army, then was made an independent military arm in 1933...
and a former CNES
CNES
The is the French government space agency . Established under President Charles de Gaulle in 1961, its headquarters are located in central Paris and it is under the supervision of the French Ministries of Defence and Research...
astronaut
Astronaut
An astronaut or cosmonaut is a person trained by a human spaceflight program to command, pilot, or serve as a crew member of a spacecraft....
. In 1985, he became the second French citizen in space, after Jean-Loup Chrétien
Jean-Loup Chrétien
Jean-Loup Jacques Marie Chrétien, is a French engineer, a retired Général de Brigade in the Armée de l'Air , and a former CNES astronaut. He flew on two Franco-Soviet space missions and a NASA Space Shuttle mission...
, when he flew aboard NASA
NASA
The National Aeronautics and Space Administration is the agency of the United States government that is responsible for the nation's civilian space program and for aeronautics and aerospace research...
's Space Shuttle
Space Shuttle
The Space Shuttle was a manned orbital rocket and spacecraft system operated by NASA on 135 missions from 1981 to 2011. The system combined rocket launch, orbital spacecraft, and re-entry spaceplane with modular add-ons...
mission STS-51-G
STS-51-G
STS-51-G was the eighteenth flight of NASA's Space Shuttle program, and the fifth flight of Space Shuttle Discovery. The mission launched from Kennedy Space Center, Florida, on 17 June 1985...
.

Baudry was born in Douala
Douala
Douala is the largest city in Cameroon and the capital of Cameroon's Littoral Province. Home to Cameroon's largest port and its major international airport, Douala International Airport, it is the commercial capital of the country...
(United Republic of Cameroon
Cameroon
Cameroon, officially the Republic of Cameroon , is a country in west Central Africa. It is bordered by Nigeria to the west; Chad to the northeast; the Central African Republic to the east; and Equatorial Guinea, Gabon, and the Republic of the Congo to the south. Cameroon's coastline lies on the...
) and is married with two children from another union. His hobbies include mechanical sports, such as motorcycling and car racing. He also enjoys running marathons, playing squash
Squash (sport)
Squash is a high-speed racquet sport played by two players in a four-walled court with a small, hollow rubber ball...
, skiing
Skiing
Skiing is a recreational activity using skis as equipment for traveling over snow. Skis are used in conjunction with boots that connect to the ski with use of a binding....
, shooting
Firearm
A firearm is a weapon that launches one, or many, projectile at high velocity through confined burning of a propellant. This subsonic burning process is technically known as deflagration, as opposed to supersonic combustion known as a detonation. In older firearms, the propellant was typically...
, windsurfing
Windsurfing
Windsurfing or sailboarding is a surface water sport that combines elements of surfing and sailing. It consists of a board usually two to four metres long, powered by the orthogonal effect of the wind on a sail. The rig is connected to the board by a free-rotating universal joint and comprises a...
, and sky diving. Baudry is also a wine connaisseur.

He has logged more than 4,000 hours flying time - 3,300 in jet aircraft - and has flown over 100 different types of aircraft - F-100
F-100 Super Sabre
The North American F-100 Super Sabre was a supersonic jet fighter aircraft that served with the United States Air Force from 1954 to 1971 and with the Air National Guard until 1979. The first of the Century Series collection of USAF jet fighters, it was the first USAF fighter capable of...
, F-104, F-4
F-4 Phantom II
The McDonnell Douglas F-4 Phantom II is a tandem two-seat, twin-engined, all-weather, long-range supersonic jet interceptor fighter/fighter-bomber originally developed for the United States Navy by McDonnell Aircraft. It first entered service in 1960 with the U.S. Navy. Proving highly adaptable,...
, A-8, T-33
T-33 Shooting Star
The Lockheed T-33 Shooting Star is an American-built jet trainer aircraft. It was produced by Lockheed and made its first flight in 1948, piloted by Tony LeVier. The T-33 was developed from the Lockheed P-80/F-80 starting as TP-80C/TF-80C in development, then designated T-33A. It was used by the...
, Lightning
English Electric Lightning
The English Electric Lightning is a supersonic jet fighter aircraft of the Cold War era, noted for its great speed and unpainted natural metal exterior finish. It is the only all-British Mach 2 fighter aircraft. The aircraft was renowned for its capabilities as an interceptor; Royal Air Force ...
, Harrier
Harrier Jump Jet
The Harrier, informally referred to as the Jump Jet, is a family of British-designed military jet aircraft capable of vertical/short takeoff and landing operations...
, Hunter
Hawker Hunter
The Hawker Hunter is a subsonic British jet aircraft developed in the 1950s. The single-seat Hunter entered service as a manoeuvrable fighter aircraft, and later operated in fighter-bomber and reconnaissance roles in numerous conflicts. Two-seat variants remained in use for training and secondary...
, Canberra
B-57 Canberra
The Martin B-57 Canberra was a United States-built, twin jet engine light bomber and reconnaissance aircraft, which entered service with the United States Air Force in 1953. The B-57 was initially a version of the English Electric Canberra built under license. However, the Glenn L...
, Jaguar
Jaguar
The jaguar is a big cat, a feline in the Panthera genus, and is the only Panthera species found in the Americas. The jaguar is the third-largest feline after the tiger and the lion, and the largest in the Western Hemisphere. The jaguar's present range extends from Southern United States and Mexico...
, all types of Mirages
Mirage (aircraft)
Mirage is the name of a series of delta-winged fighters and bombers that have been produced by the French aircraft manufacturer Dassault Aviation, flown by the French Air Force, and widely exported to foreign counties.* Dassault Mirage III...
, Mystère 4
Dassault Mystère IV
|-See also:-External links:*...
, Vautour
Sud Aviation Vautour
|-See also:-Bibliography:* Gunston, Bill. Fighters of the Fifties. Cambridge, England. Patrick Stephens Limited, 1981. ISBN 0-85059-463-4.-External links:*...
, and other aircraft.

Baudry holds an airline transport pilot license. He worked for some time after his space flight for Airbus
Airbus
Airbus SAS is an aircraft manufacturing subsidiary of EADS, a European aerospace company. Based in Blagnac, France, surburb of Toulouse, and with significant activity across Europe, the company produces around half of the world's jet airliners....
as a test pilot, and is now retired in the Aquitaine
Aquitaine
Aquitaine , archaic Guyenne/Guienne , is one of the 27 regions of France, in the south-western part of metropolitan France, along the Atlantic Ocean and the Pyrenees mountain range on the border with Spain. It comprises the 5 departments of Dordogne, :Lot et Garonne, :Pyrénées-Atlantiques, Landes...
region.

Baudry became a CNES
CNES
The is the French government space agency . Established under President Charles de Gaulle in 1961, its headquarters are located in central Paris and it is under the supervision of the French Ministries of Defence and Research...
astronaut candidate in June 1980. For two years, he trained at CNES and at Star City
Star City, Russia
Star City is a common name of an area in Moscow Oblast, Russia, which has since the 1960s been home to the Yuri Gagarin Cosmonaut Training Center...
near Moscow
Moscow
Moscow is the capital, the most populous city, and the most populous federal subject of Russia. The city is a major political, economic, cultural, scientific, religious, financial, educational, and transportation centre of Russia and the continent...
. He was a member of the back-up crew for the French-Soviet Soyuz T-6
Soyuz T-6
-Backup crew:-Mission parameters:*Mass: 6850 kg*Perigee: 189 km*Apogee: 233 km*Inclination: 51.7°*Period: 88.7 minutes-Mission highlights:...
Intercosmos mission and was trained for scientific experiments in the fields of physiology, biology, materials processing in space, and astronomy. Baudry is a CNES expert for manned space flight activities and participates in the analysis of decisions and study of definition for the future "Hermes
Hermes (shuttle)
Hermes was a proposed spaceplane designed by the French Centre National d'Études Spatiales in 1975, and later by the European Space Agency. It was superficially similar to the US X-20. France proposed in January 1985 to go through with Hermes development under the auspices of the ESA. Hermes was...
" space aircraft.

Chevalier of the Legion of Honour
Légion d'honneur
The Legion of Honour, or in full the National Order of the Legion of Honour is a French order established by Napoleon Bonaparte, First Consul of the Consulat which succeeded to the First Republic, on 19 May 1802...
; Chevalier of the National Merit Order
Ordre National du Mérite
The Ordre national du Mérite is an Order of State awarded by the President of the French Republic. It was founded on 3 December 1963 by President Charles de Gaulle...
; French Astronautics Medal; the Soviet Order of "Amitié des Peuples" and the Soviet Order of Gagarine.