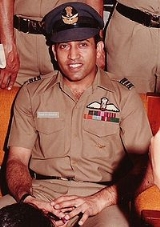 Encyclopedia
Wing commander Rakesh Sharma, AC, (born January 13, 1949) is a former Indian Air Force
Indian Air Force
The Indian Air Force is the air arm of the Indian armed forces. Its primary responsibility is to secure Indian airspace and to conduct aerial warfare during a conflict...
test pilot, and Cosmonaut aboard Soyuz T-11
Soyuz T-11
-Backup crew:-Mission parameters:*Mass: 6850 kg*Perigee: 195 km*Apogee: 224 km*Inclination: 51.6°*Period: 88.7 minutes-Mission highlights:...
as part of an Intercosmos
Intercosmos
Interkosmos was a space program of the Soviet Union designed to include members of military forces of allied Warsaw Pact countries in manned and unmanned missions...
Research Team. Sharma was the first Indian to travel in space.

Rakesh Sharma was born in 1949 in Patiala, Punjab, India
India
India , officially the Republic of India , is a country in South Asia. It is the seventh-largest country by geographical area, the second-most populous country with over 1.2 billion people, and the most populous democracy in the world...
in a Punjabi
Punjabi people
The Punjabi people , ਪੰਜਾਬੀ ), also Panjabi people, are an Indo-Aryan group from South Asia. They are the second largest of the many ethnic groups in South Asia. They originate in the Punjab region, which has been been the location of some of the oldest civilizations in the world including, the...
family and was schooled at [Kendriya Vidyalaya Tirumalagiri, Secunderabad (Hyderabad)|Kendriya Vidyalaya Tirumalagiri]], Secunderabad Hyderabad. He joined the NDA as an Air Force cadet in July 1966. He was commissioned into the Indian Air Force
Indian Air Force
The Indian Air Force is the air arm of the Indian armed forces. Its primary responsibility is to secure Indian airspace and to conduct aerial warfare during a conflict...
as a Pilot Officer
Pilot Officer
Pilot officer is the lowest commissioned rank in the Royal Air Force and the air forces of many other Commonwealth countries. It ranks immediately below flying officer...
in 1970. In 1971 operations against Pakistan
Pakistan
Pakistan , officially the Islamic Republic of Pakistan is a sovereign state in South Asia. It has a coastline along the Arabian Sea and the Gulf of Oman in the south and is bordered by Afghanistan and Iran in the west, India in the east and China in the far northeast. In the north, Tajikistan...
, he flew various missions in his MIG aircraft with distinction.

Sharma joined the Indian Air Force and progressed rapidly through the ranks. Sharma, then a Squadron Leader
Squadron Leader
Squadron Leader is a commissioned rank in the Royal Air Force and the air forces of many countries which have historical British influence. It is also sometimes used as the English translation of an equivalent rank in countries which have a non-English air force-specific rank structure. In these...
and pilot with the Indian Air Force
Indian Air Force
The Indian Air Force is the air arm of the Indian armed forces. Its primary responsibility is to secure Indian airspace and to conduct aerial warfare during a conflict...
embarked on a historic mission in 1984 as part of a joint space program between the Indian Space Research Organisation
Indian Space Research Organisation
The Indian Space Research Organisation is an independent Indian governmental agency established in 1969 for the research and development of vehicles and activities for the exploration of space within and outside of Earth’s atmosphere. Headquartered in Bangalore...
and the Soviet
Soviet space program
The Soviet space program is the rocketry and space exploration programs conducted by the former Union of Soviet Socialist Republics from the 1930s until its dissolution in 1991...
Intercosmos
Intercosmos
Interkosmos was a space program of the Soviet Union designed to include members of military forces of allied Warsaw Pact countries in manned and unmanned missions...
space program, and spent eight days in space aboard the Salyut 7
Salyut 7
Salyut 7 was a space station in low Earth orbit from April 1982 to February 1991. It was first manned in May 1982 with two crew via Soyuz T-5, and last visited in June 1986, by Soyuz T-15. Various crew and modules were used over its lifetime, including a total of 12 manned and 15 unmanned launches...
space station
Space station
A space station is a spacecraft capable of supporting a crew which is designed to remain in space for an extended period of time, and to which other spacecraft can dock. A space station is distinguished from other spacecraft used for human spaceflight by its lack of major propulsion or landing...
. Launched along with two Soviet cosmonauts aboard Soyuz T-11
Soyuz T-11
-Backup crew:-Mission parameters:*Mass: 6850 kg*Perigee: 195 km*Apogee: 224 km*Inclination: 51.6°*Period: 88.7 minutes-Mission highlights:...
on the 3 April 1984, was 35-year-old Sharma. During the flight, Sharma conducted multi-spectral
Multi-spectral image
A multispectral image is one that captures image data at specific frequencies across the electromagnetic spectrum. The wavelengths may be separated by filters or by the use of instruments that are sensitive to particular wavelengths, including light from frequencies beyond the visible light range,...
photography
Photography
Photography is the art, science and practice of creating durable images by recording light or other electromagnetic radiation, either electronically by means of an image sensor or chemically by means of a light-sensitive material such as photographic film...
of northern India in anticipation of the construction of hydroelectric power stations in the Himalayas. In a famous conversation, he was asked by the then Prime Minister
Prime Minister of India
The Prime Minister of India , as addressed to in the Constitution of India — Prime Minister for the Union, is the chief of government, head of the Council of Ministers and the leader of the majority party in parliament...
Indira Gandhi
Indira Gandhi
Indira Priyadarshini Gandhara was an Indian politician who served as the third Prime Minister of India for three consecutive terms and a fourth term . She was assassinated by Sikh extremists...
how India looked from space, to which he replied, Main binaa jhijhak ke keh sakta hoon..,'Sare Jahan Se Achcha, (a reference to an iconic poem used in India's freedom struggle, usually referred to as 'Saare jahaan se achha Hindustan haamara, ' our land of Hindustan, is the Best in the world').

He was conferred with the honour of Hero of Soviet Union upon his return from space. The Government of India conferred its highest gallantry award (during peace time), the Ashoka Chakra
Ashoka Chakra Award
The Ashok Chakra is an Indian military decoration awarded for valor, courageous action or self-sacrifice away from the battlefield. It is the peace time equivalent of the Param Vir Chakra, and is awarded for the "most conspicuous bravery or some daring or pre-eminent valour or self-sacrifice" other...
on him and the other two Soviet members of his mission.

Sharma and his backup, Wing Commander Ravish Malhotra
Ravish Malhotra
Ravish Malhotra is a retired Air Commodore of the Indian Air Force.He became an Air Force test pilot, later stationed at the test center in Bangalore. He was also the Air Officer Commanding of Hindon Air Force Station near Delhi.In 1982, he was chosen to train for spaceflight in the Soviet...
, also prepared an elaborate series of zero-gravity
Weightlessness
Weightlessness is the condition that exists for an object or person when they experience little or no acceleration except the acceleration that defines their inertial trajectory, or the trajectory of pure free-fall...
Yoga
Yoga
Yoga is a physical, mental, and spiritual discipline, originating in ancient India. The goal of yoga, or of the person practicing yoga, is the attainment of a state of perfect spiritual insight and tranquility while meditating on Supersoul...
exercises which the former had practised aboard the Salyut 7. Retiring with the rank of Wing Commander
Wing Commander (rank)
Wing commander is a commissioned rank in the Royal Air Force and the air forces of many other Commonwealth countries...
, Rakesh Sharma joined Hindustan Aeronautics Limited
Hindustan Aeronautics Limited
Hindustan Aeronautics Limited based in Bangalore, India, is one of Asia's largest aerospace companies. Under the management of the Indian Ministry of Defence, this state-owned company is mainly involved in aerospace industry, which includes manufacturing and assembling aircraft, navigation and...
(HAL) as a test pilot
Test pilot
A test pilot is an aviator who flies new and modified aircraft in specific maneuvers, known as flight test techniques or FTTs, allowing the results to be measured and the design to be evaluated....
at its Nashik Division. He was later based at the National Flight Test Center (NFTC) in Bangalore
Bangalore
Bengaluru , formerly called Bengaluru is the capital of the Indian state of Karnataka. Bangalore is nicknamed the Garden City and was once called a pensioner's paradise. Located on the Deccan Plateau in the south-eastern part of Karnataka, Bangalore is India's third most populous city and...
and worked on the indigenous Light Combat Aircraft
HAL Tejas
The HAL Tejas is a lightweight multirole fighter developed by India. It is a tailless, compound delta-wing design powered by a single engine. It came from the Light Combat Aircraft programme, which began in the 1980s to replace India's ageing MiG-21 fighters...
program, among others.