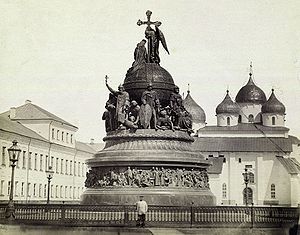 The Millennium of Russia (Russian
Russian language
Russian is a Slavic language used primarily in Russia, Belarus, Uzbekistan, Kazakhstan, Tajikistan and Kyrgyzstan. It is an unofficial but widely spoken language in Ukraine, Moldova, Latvia, Turkmenistan and Estonia and, to a lesser extent, the other countries that were once constituent republics...
Тысячелетие России) is a famous bronze monument in the Novgorod Kremlin
Novgorod Kremlin
Novgorod Kremlin stands on the left bank of the Volkhov River about two miles north of where it empties out of Lake Ilmen.-History:...
. It was erected in 1862 to celebrate the millennium of Rurik
Rurik
Rurik, or Riurik , was a semilegendary 9th-century Varangian who founded the Rurik dynasty which ruled Kievan Rus and later some of its successor states, most notably the Tsardom of Russia, until 1598....
's arrival to Novgorod, an event traditionally taken as a starting point of Russian history.

A competition to design the monument was held in 1859. An architect Viktor Hartmann
Viktor Hartmann
Viktor Alexandrovich Hartmann was a Russian architect and painter. He was associated with the Abramtsevo Colony, purchased and preserved beginning in 1870 by Savva Mamontov, and the Russian Revival.-Life:Victor-Edouard Hartmann was born in St...
and an artist Mikhail Mikeshin
Mikhail Mikeshin
Mikhail Osipovich Mikeshin was a Russian artist who regularly worked for the Romanov family and designed a number of outdoor statues in the major cities of the Russian Empire.Mikeshin was born on 21 February 1835 in a village near Roslavl...
were declared the winners. Mikeshin's design called for a grandiose, 15-metre-high bell
Bell (instrument)
A bell is a simple sound-making device. The bell is a percussion instrument and an idiophone. Its form is usually a hollow, cup-shaped object, which resonates upon being struck...
crowned by a cross
Cross
A cross is a geometrical figure consisting of two lines or bars perpendicular to each other, dividing one or two of the lines in half. The lines usually run vertically and horizontally; if they run obliquely, the design is technically termed a saltire, although the arms of a saltire need not meet...
symbolizing the tsar's power. The bell was to be encircled with several tiers of sculptures representing Russian monarchs, clerics, generals, and artists active during various periods of Russian history.

Mikeshin himself was no sculptor, therefore the 129 individual statues for the monument were made by the leading Russian sculptors of the day, including his friend Ivan Schroeder and the celebrated Alexander Opekushin
Alexander Opekushin
Alexander Mikhailovich Opekushin was s Russian sculptor. Among his works are part of the sculptures of the Millennium of Russia monument in Velikiy Novgorod , the monument to Alexander Pushkin in Moscow , the monument to Mikhail Lermontov in Pyatigorsk , the monument to Alexander II in Moscow...
. Rather unexpectedly for such an official project, the tsars and commanders were represented side by side with sixteen eminent personalities of Russian culture: Lomonosov, Pushkin, Lermontov, Gogol, Karl Brullov, Mikhail Glinka
Mikhail Glinka
Mikhail Ivanovich Glinka , was the first Russian composer to gain wide recognition within his own country, and is often regarded as the father of Russian classical music...
, etc. As for the Russian rulers, Ivan the Terrible is famously absent from the monument due to his role in the 1570 pillage and massacre of Novgorod by the Oprichnina
Oprichnina
The oprichnina is the period of Russian history between Tsar Ivan the Terrible's 1565 initiation and his 1572 disbanding of a domestic policy of secret police, mass repressions, public executions, and confiscation of land from Russian aristocrats...
. Alongside with the Muscovite princes, the mediaeval Lithuanian
Grand Duchy of Lithuania
The Grand Duchy of Lithuania was a European state from the 12th /13th century until 1569 and then as a constituent part of Polish-Lithuanian Commonwealth until 1791 when Constitution of May 3, 1791 abolished it in favor of unitary state. It was founded by the Lithuanians, one of the polytheistic...
dynasts as Gediminas or Vytautas the Great
Vytautas the Great
Vytautas ; styled "the Great" from the 15th century onwards; c. 1350 October 27, 1430) was one of the most famous rulers of medieval Lithuania. Vytautas was the ruler of the Grand Duchy of Lithuania which chiefly encompassed the Lithuanians and Ruthenians...
who reigned over the Eastern Slavs of the present-day Belarus
Belarus
Belarus , officially the Republic of Belarus, is a landlocked country in Eastern Europe, bordered clockwise by Russia to the northeast, Ukraine to the south, Poland to the west, and Lithuania and Latvia to the northwest. Its capital is Minsk; other major cities include Brest, Grodno , Gomel ,...
and Ukraine
Ukraine
Ukraine is a country in Eastern Europe. It has an area of 603,628 km², making it the second largest contiguous country on the European continent, after Russia...
are represented.

The most expensive Russian monument up to that time, it was erected at a cost of 400,000 roubles, mostly raised by public subscription. In order to provide an appropriate pedestal
Pedestal
Pedestal is a term generally applied to the support of a statue or a vase....
for the huge sculpture, sixteen blocks of Sortavala
Sortavala
Sortavala is a town in the Republic of Karelia, Russia, located at the northern tip of Lake Ladoga. Population: It is an important station of the Vyborg-Joensuu railroad.-History:...
granite were brought to Novgorod, each weighing in excess of 35 tons. The bronze monument itself weighs 65 tons. 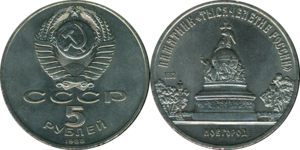 At the time when the monument was inaugurated, many art critics felt that it was overloaded with figures. Supporters regard Mikeshin's design as harmonious with the medieval setting of the Kremlin, and subtly accentuating the vertical thrust and grandeur of the nearby 11th-century Saint Sophia Cathedral
Saint Sophia Cathedral in Novgorod
The Cathedral of St. Sophia in the Kremlin in Veliky Novgorod is the cathedral church of the Archbishop of Novgorod and the mother church of the Novgorodian Eparchy.-History:...
.

During World War II
World War II
World War II, or the Second World War , was a global conflict lasting from 1939 to 1945, involving most of the world's nations—including all of the great powers—eventually forming two opposing military alliances: the Allies and the Axis...
, the Nazis dismantled the monument, and prepared it to be transported to Germany. However, the Red Army regained control of Novgorod and the monument was restored to public view in 1944. A 5-ruble commemorative coin
Commemorative coins of the Soviet Union
Commemorative coins were released in the USSR between 1965 and 1991. Most of them were made of copper-nickel alloy, but there were also silver coins, gold coins, palladium coins and platinum coins. All of the coins were minted either by the Moscow Mint or by the Leningrad Mint...
was released in the USSR in 1988 to commemorate the monument.