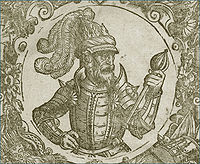 Two factors are supposed to have contributed to achieve this result; the extraordinary political sagacity of Algirdas and the life-long devotion of his brother Kęstutis
Kestutis
Kęstutis was monarch of medieval Lithuania. He was the Duke of Trakai and governed the Grand Duchy of Lithuania, 1342–82, together with his brother Algirdas , and with his nephew Jogaila...
. A neat division of their dominion
Dominion
A dominion, often Dominion, refers to one of a group of autonomous polities that were nominally under British sovereignty, constituting the British Empire and British Commonwealth, beginning in the latter part of the 19th century. They have included Canada, Australia, New Zealand, Newfoundland,...
s is illustrated by the fact, that Algirdas appears almost only in East Slavic sources, whereas the Western chronicles are aware of mostly Kęstutis. The Teutonic knights
Teutonic Knights
The Order of Brothers of the German House of Saint Mary in Jerusalem , commonly the Teutonic Order , is a German medieval military order, in modern times a purely religious Catholic order...
in the north and the Tatar hordes
Golden Horde
The Golden Horde was a Mongol and later Turkicized khanate that formed the north-western sector of the Mongol Empire...
in the south were equally bent on the subjection of Lithuania, while Algirdas' eastern and western neighbors Muscovy and Poland
Poland
Poland , officially the Republic of Poland , is a country in Central Europe bordered by Germany to the west; the Czech Republic and Slovakia to the south; Ukraine, Belarus and Lithuania to the east; and the Baltic Sea and Kaliningrad Oblast, a Russian exclave, to the north...
generally were hostile competitors.

Algirdas not only succeeded in holding his own, but acquired influence and territory at the expense of Muscovy and the Golden Horde
Golden Horde
The Golden Horde was a Mongol and later Turkicized khanate that formed the north-western sector of the Mongol Empire...
, and extended the borders of the Grand Duchy of Lithuania to the northern shore of the Black Sea. Principal efforts of Algirdas were directed to securing the Slavonic
Slavic peoples
The Slavic people are an Indo-European panethnicity living in Eastern Europe, Southeast Europe, North Asia and Central Asia. The term Slavic represents a broad ethno-linguistic group of people, who speak languages belonging to the Slavic language family and share, to varying degrees, certain...
lands which had been a part of the former Kievan Rus
Kievan Rus'
Kievan Rus was a medieval polity in Eastern Europe, from the late 9th to the mid 13th century, when it disintegrated under the pressure of the Mongol invasion of 1237–1240....
. He procured the election of his son Andrew
Andrew
Andrew is the English form of a given name and surname common in many countries. Alternatives include André, Andrey, Andrei, Andrej, András, Andrés, Andreas, Andreu, Anders and Endrew. ‘Andrew’ is a common name in English-speaking countries. In the 1990s it was among the top ten most popular names...
as the Prince of Pskov
Pskov
Pskov is an ancient city and the administrative center of Pskov Oblast, Russia, located in the northwest of Russia about east from the Estonian border, on the Velikaya River. Population: -Early history:...
, and a powerful minority of the citizens of the Republic of Novgorod held the balance in his favor against the Muscovite influence, however his ascendancy in both these commercial centres was at the best precarious.

Algirdas occupied the important principalities of Smolensk
Smolensk
Smolensk is a city and the administrative center of Smolensk Oblast, Russia, located on the Dnieper River. Situated west-southwest of Moscow, this walled city was destroyed several times throughout its long history since it was on the invasion routes of both Napoleon and Hitler. Today, Smolensk...
and Bryansk
Bryansk
Bryansk is a city and the administrative center of Bryansk Oblast, Russia, located southwest of Moscow. Population: -History:The first written mention of Bryansk was in 1146, in the Hypatian Codex, as Debryansk...
in the western Russia. Although his relations with the grand dukes of Muscovy were friendly on the whole, as he has married two Orthodox
Russian Orthodox Church
The Russian Orthodox Church or, alternatively, the Moscow Patriarchate The ROC is often said to be the largest of the Eastern Orthodox churches in the world; including all the autocephalous churches under its umbrella, its adherents number over 150 million worldwide—about half of the 300 million...
Russian princesses, this did not prevent him from besieging
Siege
A siege is a military blockade of a city or fortress with the intent of conquering by attrition or assault. The term derives from sedere, Latin for "to sit". Generally speaking, siege warfare is a form of constant, low intensity conflict characterized by one party holding a strong, static...
Moscow in 1368 and again in 1372, both times unsuccessfully.

An important feat of Algirdas was his victory over the Tatars in the Battle of Blue Waters
Battle of Blue Waters
The Battle of Blue Waters was a medieval battle fought at some time between 24 September and 25 December 1362 near the Syni Vody of the Southern Bug between the armies of the Grand Duchy of Lithuania and the Golden Horde....
at the Southern Bug
Southern Bug
The Southern Bug, also called Southern Buh), is a river located in Ukraine. The source of the river is in the west of Ukraine, in the Volyn-Podillia Upland, about 145 km from the Polish border, and flows southeasterly into the Bug Estuary through the southern steppes...
in 1362. It resulted in breaking up of the powerful Kipchak horde and compelled the khan to migrate still farther south and establish his headquarters for the future in the Crimea
Crimea
Crimea , or the Autonomous Republic of Crimea , is a sub-national unit, an autonomous republic, of Ukraine. It is located on the northern coast of the Black Sea, occupying a peninsula of the same name...
.

Modern historians argue, that "For Gediminas and Algirdas, retention of paganism provided a useful diplomatic tool and weapon... that allowed them to use promises of conversion
Christianization of Lithuania
The Christianization of Lithuania – Christianization of the Grand Duchy of Lithuania that took place in 1387, initiated by the King of Poland and Grand Duke of Lithuania Jogaila and his cousin Vytautas, that signified the official adoption of Christianity by Lithuanians, one of the last pagan...
as a means of preserving their power and independence". According to Hermann von Wartberge
Hermann von Wartberge
Hermann von Wartberge was a chronicler of the Livonian Order. Born in Westphalia, Wartberge was a Catholic priest and author of the valuable Latin chronicle Chronicon Livoniale covering the history of the Livonian Crusade from 1196 to 1378...
and Jan Długosz, Algirdas remained a pagan until his death in summer 1377. Contemporary Byzantine accounts also support the Western sources: Patriarch Neilos described Algirdas as fire-worshipping prince; another Patriarch Philotheos excommunicated all Ruthenian noblemen, who helped impious Algirdas. Algirdas' pagan faith also went into the 14th Byzantine historian's Nicephorus Gregoras
Nicephorus Gregoras
Nikephoros Gregoras, latinized as Nicephorus Gregoras , Byzantine astronomer, historian, man of learning and religious controversialist, was born at Heraclea Pontica....
' accounts.

In retrospect Algirdas appeared to the Orthodox faithful of Ukraine
Ukraine
Ukraine is a country in Eastern Europe. It has an area of 603,628 km², making it the second largest contiguous country on the European continent, after Russia...
and Belarus
Belarus
Belarus , officially the Republic of Belarus, is a landlocked country in Eastern Europe, bordered clockwise by Russia to the northeast, Ukraine to the south, Poland to the west, and Lithuania and Latvia to the northwest. Its capital is Minsk; other major cities include Brest, Grodno , Gomel ,...
as a champion of Orthodoxy. The 16th-century Bychowiec Chronicle
Bychowiec Chronicle
The Bychowiec Chronicle named the Letopis of the Grand Dukes of Lithuania is an anonymous 16th century chronicle of the Grand Duchy of Lithuania. Although one of the least reliable sources of the epoch, it is considered the most complete redaction of the Lithuanian Chronicles...
and 17th-century Hustynska Chronicle maintain that he converted to Orthodox Christianity at some point prior to his marriage to Maria of Vitebsk in 1318. Although several Orthodox churches were indeed built in Vilnius during his reign, later assertions about his baptism find no corroboration in sources dating from Algirdas' life, leading most scholars to reject them as spurious. Despite the contemporary accounts, as well as modern studies, some Russian historians, such as Batiushikov, claim that Algirdas had been an Orthodox ruler.

Nevertheless, the dubious tradition about Algirdas' Orthodox conversion lived on. The commemoration book of the Kiev Monastery of the Caves, underwritten by Algirdas' descendants, recorded his baptismal name  as "Demetrius" as early as 1460s. Following Wojciech Wijuk Kojałowicz and Macarius I
Macarius I
Macarius I , born Mikhail Petrovich Bulgakov , was the Metropolitan of Moscow and Kolomna in 1879-1882 and member of many learned societies, including the Russian Academy of Sciences....
, Volodymyr Antonovych
Volodymyr Antonovych
Volodymyr Antonovych , was a prominent Ukrainian historian and one of the leaders of the Ukrainian national awakening in the Russian Empire. As a historian, Antonovych, who was longtime Professor of History at the University of Kiev, represented a populist approach to Ukrainian history.This...
writes that Algirdas took monastic vows several days before his death and was interred at the Cathedral of the Theotokos, Vilnius
Cathedral of the Theotokos, Vilnius
The Cathedral of the Theotokos in Vilnius is the main Orthodox Christian church of Lithuania.The cathedral was built during the reign of the Grand Duke Algirdas in 1346...
under the monastic name Alexius.

Algirdas is said to have ordered the death of Anthony, John, and Eustathius of Vilnius, who were later glorified
Canonization
Canonization is the act by which a Christian church declares a deceased person to be a saint, upon which declaration the person is included in the canon, or list, of recognized saints. Originally, individuals were recognized as saints without any formal process...
as martyrs of the Russian Orthodox Church
Russian Orthodox Church
The Russian Orthodox Church or, alternatively, the Moscow Patriarchate The ROC is often said to be the largest of the Eastern Orthodox churches in the world; including all the autocephalous churches under its umbrella, its adherents number over 150 million worldwide—about half of the 300 million...
. 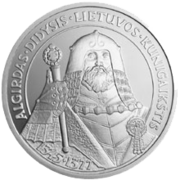 Algirdas wisely vacillated between Muscovy and Poland, spoke Lithuanian
Lithuanian language
Lithuanian is the official state language of Lithuania and is recognized as one of the official languages of the European Union. There are about 2.96 million native Lithuanian speakers in Lithuania and about 170,000 abroad. Lithuanian is a Baltic language, closely related to Latvian, although they...
and amongst others the Ruthenian language
Ruthenian language
Ruthenian, or Old Ruthenian , is a term used for the varieties of Eastern Slavonic spoken in the Grand Duchy of Lithuania and later in the East Slavic territories of the Polish–Lithuanian Commonwealth....
, and was more inclined to follow the majority of his pagan
Paganism
Paganism is a blanket term, typically used to refer to non-Abrahamic, indigenous polytheistic religious traditions....
and Orthodox subjects rather than to alienate them by promoting Roman Catholicism. His son Jogaila
Jogaila
Jogaila, later 'He is known under a number of names: ; ; . See also: Jogaila : names and titles. was Grand Duke of Lithuania , king consort of Kingdom of Poland , and sole King of Poland . He ruled in Lithuania from 1377, at first with his uncle Kęstutis...
, however, ascended the Polish throne, converted to Roman Catholicism and founded the dynasty which ruled Lithuania and Poland for nearly 200 years.
The source of this article is wikipedia, the free encyclopedia.  The text of this article is licensed under the GFDL.