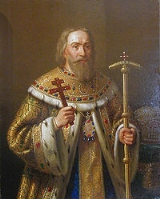 Encyclopedia
Feodor Nikitich Romanov was a Russian boyar
Boyar
A boyar, or bolyar , was a member of the highest rank of the feudal Moscovian, Kievan Rus'ian, Bulgarian, Wallachian, and Moldavian aristocracies, second only to the ruling princes , from the 10th century through the 17th century....
who after temporary disgrace rose to become patriarch of Moscow as Filaret , and became de-facto ruler of Russia during the reign of his son, Mikhail Feodorovich.

Feodor was born in Moscow the second son of the prominent boyar Nikita Romanovich
Nikita Romanovich
Nikita Romanovich , also known as Nikita Romanovich Zakharyin-Yuriev, was a Muscovite Boyar in 1563 whose grandson Mikhail Feodorovich founded the Romanov dynasty of Russian tsars...
and was the first to bear the Romanov
Romanov
The House of Romanov was the second and last imperial dynasty to rule over Russia, reigning from 1613 until the February Revolution abolished the crown in 1917...
surname. During the reign of his first cousin Feodor I
Feodor I of Russia
Fyodor I Ivanovich 1598) was the last Rurikid Tsar of Russia , son of Ivan IV and Anastasia Romanovna. In English he is sometimes called Feodor the Bellringer in consequence of his strong faith and inclination to travel the land and ring the bells at churches. However, in Russian the name...
(1584–1598), young Feodor Romanov distinguished himself both as a soldier and a diplomat, fighting against the forces of John III of Sweden
John III of Sweden
-Family:John married his first wife, Catherine Jagellonica of Poland , house of Jagiello, in Vilnius on 4 October 1562. In Sweden, she is known as Katarina Jagellonica. She was the sister of king Sigismund II Augustus of Poland...
in 1590, and conducting negotiations with the ambassadors of Rudolf II, Holy Roman Emperor
Rudolf II, Holy Roman Emperor
Rudolf II was Holy Roman Emperor , King of Hungary and Croatia , King of Bohemia and Archduke of Austria...
from 1593 to 1594. He was made a Boyar
Boyar
A boyar, or bolyar , was a member of the highest rank of the feudal Moscovian, Kievan Rus'ian, Bulgarian, Wallachian, and Moldavian aristocracies, second only to the ruling princes , from the 10th century through the 17th century....
in 1583.

On the death of the childless tsar, he was the popular candidate for the vacant throne; but he acquiesced in the election of Boris Godunov
Boris Godunov
Boris Fyodorovich Godunov was de facto regent of Russia from c. 1585 to 1598 and then the first non-Rurikid tsar from 1598 to 1605. The end of his reign saw Russia descend into the Time of Troubles.-Early years:...
, and shared the disgrace of his too-powerful family three years later, when Boris compelled both him and his wife, Xenia Shestova, to take monastic vows under the names of Filaret and Martha respectively.

Filaret was kept in the strictest confinement in the Antoniev Monastery of the Russian North, where he was exposed to every conceivable indignity; but when the False Dmitriy I
False Dmitriy I
False Dmitriy I was the Tsar of Russia from 21 July 1605 until his death on 17 May 1606 under the name of Dimitriy Ioannovich . He is sometimes referred to under the usurped title of Dmitriy II...
overthrew the Godunovs, he released Filaret and made him metropolitan
Metropolitan bishop
In Christian churches with episcopal polity, the rank of metropolitan bishop, or simply metropolitan, pertains to the diocesan bishop or archbishop of a metropolis; that is, the chief city of a historical Roman province, ecclesiastical province, or regional capital.Before the establishment of...
of Rostov
Rostov
Rostov is a town in Yaroslavl Oblast, Russia, one of the oldest in the country and a tourist center of the Golden Ring. It is located on the shores of Lake Nero, northeast of Moscow. Population:...
(1605). 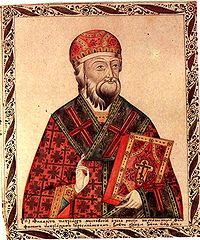 In 1609 Filaret fell into the hands of False Dmitriy II, who named him Patriarch
Patriarch
Originally a patriarch was a man who exercised autocratic authority as a pater familias over an extended family. The system of such rule of families by senior males is called patriarchy. This is a Greek word, a compound of πατριά , "lineage, descent", esp...
of all Russia, though his jurisdiction only extended over the very limited area which acknowledged the impostor
Impostor
An impostor or imposter is a person who pretends to be somebody else, often to try to gain financial or social advantages through social engineering, but just as often for purposes of espionage or law enforcement....
. From 1610 to 1618 he was a prisoner in the hands of the Polish king, Sigismund III Vasa
Sigismund III Vasa
Sigismund III Vasa was King of Poland and Grand Duke of Lithuania, a monarch of the united Polish–Lithuanian Commonwealth from 1587 to 1632, and King of Sweden from 1592 until he was deposed in 1599...
, whom he refused to acknowledge as tsar of Muscovy on being sent on an embassy to the Polish camp in 1610. He was released on the conclusion of the truce of Deulino
Truce of Deulino
Truce of Deulino was signed on 11 December 1618 and took effect on 4 January 1619. It concluded the Polish–Muscovite War between the Polish–Lithuanian Commonwealth and the Tsardom of Russia....
(13 February 1619), and on 2 June of the same year was canonically enthroned Patriarch of Moscow and all of Russia.

Thenceforth, until his death, the established government of Muscovy was a diarchy
Diarchy
Diarchy , from the Greek δι- "twice" and αρχια, "rule", is a form of government in which two individuals, the diarchs, are the heads of state. In most diarchies, the diarchs hold their position for life and pass the responsibilities and power of the position to their children or family when they...
. From 1619 to 1633 there were two actual sovereigns, Tsar Michael and his father, the most holy Patriarch Filaret. Theoretically they were co-regent
Regent
A regent, from the Latin regens "one who reigns", is a person selected to act as head of state because the ruler is a minor, not present, or debilitated. Currently there are only two ruling Regencies in the world, sovereign Liechtenstein and the Malaysian constitutive state of Terengganu...
s, but Filaret frequently transacted affairs of state without consulting the tsar. He replenished the treasury by a more equable and rational system of assessing and collecting the tax
Tax
To tax is to impose a financial charge or other levy upon a taxpayer by a state or the functional equivalent of a state such that failure to pay is punishable by law. Taxes are also imposed by many subnational entities...
es. His most important domestic measure was the chaining of the peasant
Peasant
A peasant is an agricultural worker who generally tend to be poor and homeless-Etymology:The word is derived from 15th century French païsant meaning one from the pays, or countryside, ultimately from the Latin pagus, or outlying administrative district.- Position in society :Peasants typically...
ry to the soil, a measure directed against the ever increasing migration of the down-trodden serfs to the steppe
Steppe
In physical geography, steppe is an ecoregion, in the montane grasslands and shrublands and temperate grasslands, savannas, and shrublands biomes, characterized by grassland plains without trees apart from those near rivers and lakes...
s, where they became freebooters instead of taxpayers. The taxation of the tsar's military tenants was a first step towards the proportional taxation of the hitherto privileged classes.

Filaret's zeal for the purity of orthodoxy
Russian Orthodox Church
The Russian Orthodox Church or, alternatively, the Moscow Patriarchate The ROC is often said to be the largest of the Eastern Orthodox churches in the world; including all the autocephalous churches under its umbrella, its adherents number over 150 million worldwide—about half of the 300 million...
sometimes led him into excesses but he encouraged the publication of theological works, formed the nucleus of the subsequently famous Patriarchal Library, and commanded that every archbishop
Archbishop
An archbishop is a bishop of higher rank, but not of higher sacramental order above that of the three orders of deacon, priest , and bishop...
should establish a seminary
Seminary
A seminary, theological college, or divinity school is an institution of secondary or post-secondary education for educating students in theology, generally to prepare them for ordination as clergy or for other ministry...
for the clergy, himself setting the example. Another great service rendered by Filaret to his country was the reorganization of the Muscovite army with the help of foreign officers. His death in October 1633 put an end to the Russo-Polish War
Smolensk War
The Smolensk War was a conflict fought between the Polish-Lithuanian Commonwealth and Russia.Hostilities began in October 1632 when Tsar forces tried to recapture the city of Smolensk, a former Russian possession. Small military engagements produced mixed results for both sides, but the surrender...
(1632–33), withdrawing the strongest prop from a tsar feeble enough even when supported by all the weight of his authority.