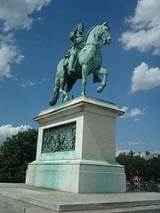 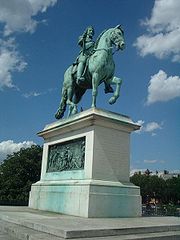 Pedestal is a term generally applied to the support of a statue
Statue
A statue is a sculpture in the round representing a person or persons, an animal, an idea or an event, normally full-length, as opposed to a bust, and at least close to life-size, or larger...
or a vase
Vase
The vase is an open container, often used to hold cut flowers. It can be made from a number of materials including ceramics and glass. The vase is often decorated and thus used to extend the beauty of its contents....
.

Although in Syria
Syria
Syria , officially the Syrian Arab Republic , is a country in Western Asia, bordering Lebanon and the Mediterranean Sea to the West, Turkey to the north, Iraq to the east, Jordan to the south, and Israel to the southwest....
, Asia Minor
Asia Minor
Asia Minor is a geographical location at the westernmost protrusion of Asia, also called Anatolia, and corresponds to the western two thirds of the Asian part of Turkey...
and Tunisia
Tunisia
Tunisia , officially the Tunisian RepublicThe long name of Tunisia in other languages used in the country is: , is the northernmost country in Africa. It is a Maghreb country and is bordered by Algeria to the west, Libya to the southeast, and the Mediterranean Sea to the north and east. Its area...
the Romans occasionally raised the columns of their temples or propylaea on square pedestals, in Rome
Rome
Rome is the capital of Italy and the country's largest and most populated city and comune, with over 2.7 million residents in . The city is located in the central-western portion of the Italian Peninsula, on the Tiber River within the Lazio region of Italy.Rome's history spans two and a half...
itself they were employed only to give greater importance to isolated columns, such as those of Trajan
Trajan's Column
Trajan's Column is a Roman triumphal column in Rome, Italy, which commemorates Roman emperor Trajan's victory in the Dacian Wars. It was probably constructed under the supervision of the architect Apollodorus of Damascus at the order of the Roman Senate. It is located in Trajan's Forum, built near...
and Antoninus
Antoninus Pius
Antoninus Pius , also known as Antoninus, was Roman Emperor from 138 to 161. He was a member of the Nerva-Antonine dynasty and the Aurelii. He did not possess the sobriquet "Pius" until after his accession to the throne...
, or as a podium
Podium
A podium is a platform that is used to raise something to a short distance above its surroundings. It derives from the Greek πόδι In architecture a building can rest on a large podium. Podia can also be used to raise people, for instance the conductor of an orchestra stands on a podium as do many...
to the columns employed decoratively in the Roman triumphal arches.

The architects of the Italian revival
Renaissance
The Renaissance was a cultural movement that spanned roughly the 14th to the 17th century, beginning in Italy in the Late Middle Ages and later spreading to the rest of Europe. The term is also used more loosely to refer to the historical era, but since the changes of the Renaissance were not...
, however, conceived the idea that no order was complete without a pedestal, and as the orders were by them employed to divide up and decorate a building in several stories, the cornice of the pedestal was carried through and formed the sills of their windows, or, in open arcades, round a court, the balustrade of the arcade
Arcade (architecture)
An arcade is a succession of arches, each counterthrusting the next, supported by columns or piers or a covered walk enclosed by a line of such arches on one or both sides. In warmer or wet climates, exterior arcades provide shelter for pedestrians....
. They also would seem to have considered that the height of the pedestal should correspond in its proportion with that of the column or pilaster
Pilaster
A pilaster is a slightly-projecting column built into or applied to the face of a wall. Most commonly flattened or rectangular in form, pilasters can also take a half-round form or the shape of any type of column, including tortile....
it supported; thus in the church of Saint John Lateran, where the applied order is of considerable dimensions, the pedestal is 13 feet (4 m) high instead of the ordinary height of 3 to 5 feet (1.5 m).

In the imperial China, a stone tortoise called bixi
Bixi (tortoise)
Bixi , also called guifu or baxia , is a stone tortoise, used as a pedestal for a stele or tablet. Tortoise-mounted stelae have been traditionally used in the funerary complexes of Chinese emperors and other dignitaries. Later, they have also been used to commemorate an important event, such as...
was traditionally used as the pedestal for important stele, especially those associated with emperors. According to the 1396 version of the regulations issued by the Ming Dynasty
Ming Dynasty
The Ming Dynasty, also Empire of the Great Ming, was the ruling dynasty of China from 1368 to 1644, following the collapse of the Mongol-led Yuan Dynasty. The Ming, "one of the greatest eras of orderly government and social stability in human history", was the last dynasty in China ruled by ethnic...
founder, the Hongwu Emperor
Hongwu Emperor
The Hongwu Emperor , known variably by his given name Zhu Yuanzhang and by his temple name Taizu of Ming , was the founder and first emperor of the Ming Dynasty of China...
, the highest nobility (those of the gong and hou ranks) and the officials of the top 3 ranks were eligible for bixi-based funerary tablets, while lower-level mandarins
Mandarin (bureaucrat)
A mandarin was a bureaucrat in imperial China, and also in the monarchist days of Vietnam where the system of Imperial examinations and scholar-bureaucrats was adopted under Chinese influence.-History and use of the term:...
' steles were to stand on simple rectangular pedestals.

An elevated pedestal or plinth which bears a statue and which is raised from the substructure supporting it (typically roofs or corniches) is sometimes called an acropodium. The term is from the Greek
Greek language
Greek is an independent branch of the Indo-European family of languages. Native to the southern Balkans, it has the longest documented history of any Indo-European language, spanning 34 centuries of written records. Its writing system has been the Greek alphabet for the majority of its history;...
akros or topmost + podos or foot. Often misheard "pedal stool".


Use in Popular Culture

When a person overly idealizes someone (or something), it is often referred to as "putting them on a pedestal".
The source of this article is wikipedia, the free encyclopedia.  The text of this article is licensed under the GFDL.