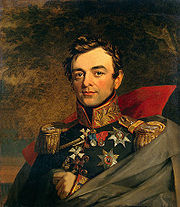 Ivan Fyodorovich Paskevich ( – ) was a Ukrainian
Ukraine
Ukraine is a country in Eastern Europe. It has an area of 603,628 km², making it the second largest contiguous country on the European continent, after Russia...
-born military leader. For his victories, he was made Count
Count
A count or countess is an aristocratic nobleman in European countries. The word count came into English from the French comte, itself from Latin comes—in its accusative comitem—meaning "companion", and later "companion of the emperor, delegate of the emperor". The adjective form of the word is...
of Erivan in 1828 and Namestnik of the Kingdom of Poland in 1831. He attained the rank of field marshal
Field Marshal
Field Marshal is a military rank. Traditionally, it is the highest military rank in an army.-Etymology:The origin of the rank of field marshal dates to the early Middle Ages, originally meaning the keeper of the king's horses , from the time of the early Frankish kings.-Usage and hierarchical...
in the Russian army, and later in the Prussian
Kingdom of Prussia
The Kingdom of Prussia was a German kingdom from 1701 to 1918. Until the defeat of Germany in World War I, it comprised almost two-thirds of the area of the German Empire...
and Austria
Austria
Austria , officially the Republic of Austria , is a landlocked country of roughly 8.4 million people in Central Europe. It is bordered by the Czech Republic and Germany to the north, Slovakia and Hungary to the east, Slovenia and Italy to the south, and Switzerland and Liechtenstein to the...
n armies.

Born in Poltava
Poltava
Poltava is a city in located on the Vorskla River in central Ukraine. It is the administrative center of the Poltava Oblast , as well as the surrounding Poltava Raion of the oblast. Poltava's estimated population is 298,652 ....
on 19 May 1782, to a well-known family of the Ukrainian Cossack gentry
Gentry
Gentry denotes "well-born and well-bred people" of high social class, especially in the past....
, he was educated at the imperial institution for page
Page (servant)
A page or page boy is a traditionally young male servant, a messenger at the service of a nobleman or royal.-The medieval page:In medieval times, a page was an attendant to a knight; an apprentice squire...
s, where his progress was rapid, and in 1800 received his commission in the Guards and was named aide-de-camp
Aide-de-camp
An aide-de-camp is a personal assistant, secretary, or adjutant to a person of high rank, usually a senior military officer or a head of state...
to the tsar
Tsar
Tsar is a title used to designate certain European Slavic monarchs or supreme rulers. As a system of government in the Tsardom of Russia and Russian Empire, it is known as Tsarist autocracy, or Tsarism...
. His first active service was in 1805, in the auxiliary army sent to the assistance of Austria
Austria
Austria , officially the Republic of Austria , is a landlocked country of roughly 8.4 million people in Central Europe. It is bordered by the Czech Republic and Germany to the north, Slovakia and Hungary to the east, Slovenia and Italy to the south, and Switzerland and Liechtenstein to the...
against France
France
The French Republic , The French Republic , The French Republic , (commonly known as France , is a unitary semi-presidential republic in Western Europe with several overseas territories and islands located on other continents and in the Indian, Pacific, and Atlantic oceans. Metropolitan France...
, when he took part in the Battle of Austerlitz
Battle of Austerlitz
The Battle of Austerlitz, also known as the Battle of the Three Emperors, was one of Napoleon's greatest victories, where the French Empire effectively crushed the Third Coalition...
, 20 December 1805, where Austrian – Russian troops were defeated by the French
First French Empire
The First French Empire , also known as the Greater French Empire or Napoleonic Empire, was the empire of Napoleon I of France...
under Napoleon.

From 1807 to 1812, Ivan Paskevich was engaged in the campaign
Military campaign
In the military sciences, the term military campaign applies to large scale, long duration, significant military strategy plan incorporating a series of inter-related military operations or battles forming a distinct part of a larger conflict often called a war...
s against Turkey
Turkey
Turkey , known officially as the Republic of Turkey , is a Eurasian country located in Western Asia and in East Thrace in Southeastern Europe...
, and distinguished himself by many brilliant and daring exploits, being made a general officer in his thirtieth year. During the war with France
France
The French Republic , The French Republic , The French Republic , (commonly known as France , is a unitary semi-presidential republic in Western Europe with several overseas territories and islands located on other continents and in the Indian, Pacific, and Atlantic oceans. Metropolitan France...
in 1812–1814 he was present, in command of the 26th division
Division (military)
A division is a large military unit or formation usually consisting of between 10,000 and 20,000 soldiers. In most armies, a division is composed of several regiments or brigades, and in turn several divisions typically make up a corps...
of infantry
Infantry
Infantrymen are soldiers who are specifically trained for the role of fighting on foot to engage the enemy face to face and have historically borne the brunt of the casualties of combat in wars. As the oldest branch of combat arms, they are the backbone of armies...
, at all the most important engagements, and he won promotion to the rank of lieutenant general
Lieutenant General
Lieutenant General is a military rank used in many countries. The rank traces its origins to the Middle Ages where the title of Lieutenant General was held by the second in command on the battlefield, who was normally subordinate to a Captain General....
.

On the outbreak of war with Persia in 1826 he was appointed second in command, and, succeeding in the following year to the chief command
Viceroyalty of the Caucasus
The Viceroyalty of the Caucasus is a term used to denote the Imperial Russian administrative and political authority in the Caucasus region exercised through the offices of glavnoupravlyayushchiy and namestnik...
, gained rapid and brilliant successes which compelled the shah
Shah
Shāh is the title of the ruler of certain Southwest Asian and Central Asian countries, especially Persia , and derives from the Persian word shah, meaning "king".-History:...
to sue for peace in February 1828. In reward of his services he was created Count of Erivan and received a million rubles
Russian ruble
The ruble or rouble is the currency of the Russian Federation and the two partially recognized republics of Abkhazia and South Ossetia. Formerly, the ruble was also the currency of the Russian Empire and the Soviet Union prior to their breakups. Belarus and Transnistria also use currencies with...
and a diamond
Diamond
In mineralogy, diamond is an allotrope of carbon, where the carbon atoms are arranged in a variation of the face-centered cubic crystal structure called a diamond lattice. Diamond is less stable than graphite, but the conversion rate from diamond to graphite is negligible at ambient conditions...
-mounted sword. From Persia he was sent again to Turkey
Turkey
Turkey , known officially as the Republic of Turkey , is a Eurasian country located in Western Asia and in East Thrace in Southeastern Europe...
, and, having captured in rapid succession the principal fortresses, he was at the end of the campaign made a Field Marshal
Field Marshal
Field Marshal is a military rank. Traditionally, it is the highest military rank in an army.-Etymology:The origin of the rank of field marshal dates to the early Middle Ages, originally meaning the keeper of the king's horses , from the time of the early Frankish kings.-Usage and hierarchical...
at the age of forty-seven. In 1830, he was engaged in the Caucasian War
Caucasian War
The Caucasian War of 1817–1864, also known as the Russian conquest of the Caucasus was an invasion of the Caucasus by the Russian Empire which ended with the annexation of the areas of the North Caucasus to Russia...
on the territory of present-day Dagestan
Dagestan
The Republic of Dagestan is a federal subject of Russia, located in the North Caucasus region. Its capital and the largest city is Makhachkala, located at the center of Dagestan on the Caspian Sea...
.
In June 1831, after the death of Field Marshal von Diebitsch
Hans Karl von Diebitsch
Count Hans Karl Friedrich Anton von Diebitsch und Narden was a German-born soldier serving as Russian Field Marshal....
, commander of Russian troops in Congress Poland
Congress Poland
The Kingdom of Poland , informally known as Congress Poland , created in 1815 by the Congress of Vienna, was a personal union of the Russian parcel of Poland with the Russian Empire...
, Paskevich was appointed his successor in crushing the Polish uprising
November Uprising
The November Uprising , Polish–Russian War 1830–31 also known as the Cadet Revolution, was an armed rebellion in the heartland of partitioned Poland against the Russian Empire. The uprising began on 29 November 1830 in Warsaw when the young Polish officers from the local Army of the Congress...
. His armies, following the decisive success of Diebitsch at the Battle of Ostrołęka in May, advanced slowly but Paskevich redeemed his reputation at the Battle of Warsaw
Battle of Warsaw (1831)
The Battle of Warsaw was fought in September 1831 between Imperial Russia and Poland. The Russians were led by Ivan Paskevich, while the Polish were led by Jan Krukowiecki. The Russians captured the Polish capital, Warsaw, crushing the November Uprising, which had begun in late 1830....
, giving a death blow to the Polish hopes of restoring independence. He was created Prince of Warsaw and awarded the office of namestnik of the Kingdom of Poland. With the kingdom's autonomy limited by the Statute
Organic Statute of the Kingdom of Poland
The Organic Statute of the Kingdom of Poland was a quasi-constitution replacing the Constitution of the Kingdom of Poland in the aftermath of the November Uprising in 1832....
, the period under Namestnik Paskevich – known in Poland as "Paskevich Night" – became infamous for political and economic repressions, as well as Russification
Russification
Russification is an adoption of the Russian language or some other Russian attributes by non-Russian communities...
.

In 1854 Paskevich took command of the Army of the Danube
Danube
The Danube is a river in the Central Europe and the Europe's second longest river after the Volga. It is classified as an international waterway....
, which was then engaging the Turks in the initial stage of the conflict which evolved into the Crimean War
Crimean War
The Crimean War was a conflict fought between the Russian Empire and an alliance of the French Empire, the British Empire, the Ottoman Empire, and the Kingdom of Sardinia. The war was part of a long-running contest between the major European powers for influence over territories of the declining...
. Although he laid siege to Silistria, Paskevich advocated aborting the campaign due to Austria's threat to intervene in the war. On June 9 he suffered a combat injury and was compelled to return to Russia, handing command of the army to General Mikhail Dmitrievich Gorchakov
Mikhail Dmitrievich Gorchakov
Prince Mikhail Dmitrievich Gorchakov was a Russian General of the Artillery from the Gorchakov family, who commanded the Russian forces in the latter stages of the Crimean War and later served as a Namestnik of Kingdom of Poland from 1856 until his death....
. Paskevich died in Warsaw, where in 1870 a memorial
Memorial
A memorial is an object which serves as a focus for memory of something, usually a person or an event. Popular forms of memorials include landmark objects or art objects such as sculptures, statues or fountains, and even entire parks....
was erected to him in front of the Koniecpolski Palace
Presidential Palace, Warsaw
The Presidential Palace in Warsaw, Poland, is the elegant classicist latest version of a building that has stood on the Krakowskie Przedmieście site since 1643. Over the years, it has been rebuilt and remodeled many times...
. His remains were reburied by his son in the family mausoleum on the grounds of the Homel Palace.
The source of this article is wikipedia, the free encyclopedia.  The text of this article is licensed under the GFDL.