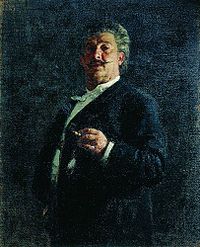 Mikhail Osipovich Mikeshin (1835 — 1896) was a Russia
Russia
Russia or , officially known as both Russia and the Russian Federation , is a country in northern Eurasia. It is a federal semi-presidential republic, comprising 83 federal subjects...
n artist who regularly worked for the Romanov
Romanov
The House of Romanov was the second and last imperial dynasty to rule over Russia, reigning from 1613 until the February Revolution abolished the crown in 1917...
family and designed a number of outdoor statues in the major cities of the Russian Empire
Russian Empire
The Russian Empire was a state that existed from 1721 until the Russian Revolution of 1917. It was the successor to the Tsardom of Russia and the predecessor of the Soviet Union...
.

Although his forte was battle painting
War artist
A war artist depicts some aspect of war through art; this might be a pictorial record or it might commemorate how "war shapes lives." War artists have explored a visual and sensory dimension of war which is often absent in written histories or other accounts of warfare.- Definition and context:A...
, Mikeshin's sketch won the much-publicized contest for the monument to the Millennium of Russia
Millennium of Russia
The Millennium of Russia is a famous bronze monument in the Novgorod Kremlin. It was erected in 1862 to celebrate the millennium of Rurik's arrival to Novgorod, an event traditionally taken as a starting point of Russian history.A competition to design the monument was held in 1859...
in 1859. Henceforward, commissions were plentiful. He illustrated the official motto Orthodoxy, Autocracy, and Nationality in designs for bombastic outdoor statues of Kuzma Minin in Nizhny Novgorod
Nizhny Novgorod
Nizhny Novgorod , colloquially shortened to Nizhny, is, with the population of 1,250,615, the fifth largest city in Russia, ranking after Moscow, St. Petersburg, Novosibirsk, and Yekaterinburg...
, Admiral Greig
Alexey Greig
Aleksey Samuilovich Greig was an admiral of the Imperial Russian Navy. He was the son of Admiral Samuel Greig, brother-in-law of Mary Somerville, and father of Samuil Greig, Russian Minister of Finance.He studied at the High School of Edinburgh under the Rector Adam from 1783 to 1785, and then...
in Nikolayev
Mykolaiv
Mykolaiv , also known as Nikolayev , is a city in southern Ukraine, administrative center of the Mykolaiv Oblast. Mykolaiv is the main ship building center of the Black Sea, and, arguably, the whole Eastern Europe.-Name of city:...
, and Alexander II of Russia
Alexander II of Russia
Alexander II , also known as Alexander the Liberator was the Emperor of the Russian Empire from 3 March 1855 until his assassination in 1881...
in Rostov-on-Don
Rostov-on-Don
-History:The mouth of the Don River has been of great commercial and cultural importance since the ancient times. It was the site of the Greek colony Tanais, of the Genoese fort Tana, and of the Turkish fortress Azak...
.

Only a few of Mikeshin's outdoor monuments survived the Soviet years. These include the statues of Catherine the Great in Saint Petersburg
Saint Petersburg
Saint Petersburg is a city and a federal subject of Russia located on the Neva River at the head of the Gulf of Finland on the Baltic Sea...
(1873), Bohdan Khmelnytsky
Bohdan Khmelnytsky
Bohdan Zynoviy Mykhailovych Khmelnytsky was a hetman of the Zaporozhian Cossack Hetmanate of Polish–Lithuanian Commonwealth . He led an uprising against the Commonwealth and its magnates which resulted in the creation of a Cossack state...
in Kiev
Kiev
Kiev or Kyiv is the capital and the largest city of Ukraine, located in the north central part of the country on the Dnieper River. The population as of the 2001 census was 2,611,300. However, higher numbers have been cited in the press....
(1888), and Ermak in Novocherkassk
Novocherkassk
Novocherkassk is a city in Rostov Oblast, Russia, located on the right bank of the Tuzlov River and on the Aksay River. Population: 169,039 ; 170,822 ; 178,000 ; 123,000 ; 81,000 ; 52,000 ....
(1904). He also won competitions to erect monuments abroad, e.g., the statue of in Lisbon
Lisbon
Lisbon is the capital city and largest city of Portugal with a population of 545,245 within its administrative limits on a land area of . The urban area of Lisbon extends beyond the administrative city limits with a population of 3 million on an area of , making it the 9th most populous urban...
. 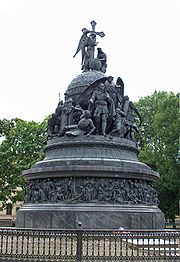 The Khmelnytsky monument was at the center of controversy, as the original version would have depicted the 17th-century Cossack
Cossack
Cossacks are a group of predominantly East Slavic people who originally were members of democratic, semi-military communities in what is today Ukraine and Southern Russia inhabiting sparsely populated areas and islands in the lower Dnieper and Don basins and who played an important role in the...
leader trampling a Pole
Poles
thumb|right|180px|The state flag of [[Poland]] as used by Polish government and diplomatic authoritiesThe Polish people, or Poles , are a nation indigenous to Poland. They are united by the Polish language, which belongs to the historical Lechitic subgroup of West Slavic languages of Central Europe...
, a Jew, and a Catholic priest
Priesthood (Catholic Church)
The ministerial orders of the Catholic Church include the orders of bishops, deacons and presbyters, which in Latin is sacerdos. The ordained priesthood and common priesthood are different in function and essence....
under the hoofs of the horse. This xenophobic element was removed in the monument as finally erected.

In 1876-78, Mikeshin was the editor of Pchela, a satirical magazine in which he published his caricature
Caricature
A caricature is a portrait that exaggerates or distorts the essence of a person or thing to create an easily identifiable visual likeness. In literature, a caricature is a description of a person using exaggeration of some characteristics and oversimplification of others.Caricatures can be...
s and illustrations to the works of Nikolai Gogol
Nikolai Gogol
Nikolai Vasilievich Gogol was a Ukrainian-born Russian dramatist and novelist.Considered by his contemporaries one of the preeminent figures of the natural school of Russian literary realism, later critics have found in Gogol's work a fundamentally romantic sensibility, with strains of Surrealism...
and Taras Shevchenko
Taras Shevchenko
Taras Hryhorovych Shevchenko -Life:Born into a serf family of Hryhoriy Ivanovych Shevchenko and Kateryna Yakymivna Shevchenko in the village of Moryntsi, of Kiev Governorate of the Russian Empire Shevchenko was orphaned at the age of eleven...
. He died on 31 January 1896 in Saint Petersburg.