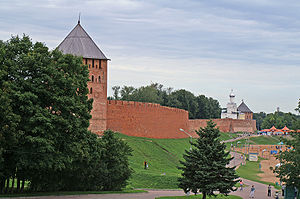 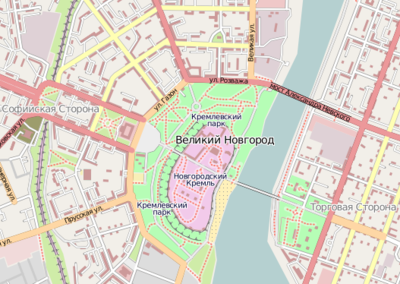 Novgorod Kremlin stands on the left bank of the Volkhov River
Volkhov River
Volkhov is a river in Novgorod Oblast and Leningrad Oblast in northwestern Russia.-Geography:The Volkhov flows out of Lake Ilmen north into Lake Ladoga, the largest lake of Europe. It is the second largest tributary of Lake Ladoga. It is navigable over its whole length. Discharge is highly...
about two miles north of where it empties out of Lake Ilmen
Lake Ilmen
Ilmen is a historically important lake in the Novgorod Oblast of Russia, formerly a vital part of the Trade route from the Varangians to the Greeks. The city of Novgorod lies six kilometers below the lake's outflow....
.

The compound was originally the site of a pagan burial ground upon which the first bishop of Novgorod, Ioakim Korsunianin
Ioakim Korsunianin
Ioakim Korsunianin was the first bishop of Novgorod the Great . As his surname suggests, he probably came from the Byzantine town of Cherson on the Crimean Peninsula and was sent to Kievan Rus' about 989...
built the Cathedral of Holy Wisdom
Saint Sophia Cathedral in Novgorod
The Cathedral of St. Sophia in the Kremlin in Veliky Novgorod is the cathedral church of the Archbishop of Novgorod and the mother church of the Novgorodian Eparchy.-History:...
upon his arrival in the area in 989 or so. Thus the compound was and remained largely an ecclesiastical site, although many Novgorodian boyars built their houses in the southern part of the Detinets.

The current fortress was built between 1484 and 1490 by Muscovite
Grand Duchy of Moscow
The Grand Duchy of Moscow or Grand Principality of Moscow, also known in English simply as Muscovy , was a late medieval Rus' principality centered on Moscow, and the predecessor state of the early modern Tsardom of Russia....
builders in the wake of Grand Prince Ivan III's
Ivan III of Russia
Ivan III Vasilyevich , also known as Ivan the Great, was a Grand Prince of Moscow and "Grand Prince of all Rus"...
conquest of the city in 1478; a third of it was paid for by the Novgorodian archbishop Gennady
Gennady (Archbishop of Novgorod)
Gennady was Archbishop of Novgorod the Great and Pskov from 1484 to 1504. He was most instrumental in fighting the Heresy of the Judaizers and is famous for compiling the first complete codex of the Bible in Slavic in 1499, known as the Gennady Bible. Gennady is a saint of the Russian Orthodox...
, a Muscovite appointee (1484–1504). It is a large oval 545 meters long and 240 meter wide with nine surviving towers (three additional towers have not survived). The tallest tower, the Kokui tower is capped by a silver dome. It was built in the eighteenth century and its name is of Swedish origin. Today it is possible to enter this tower and climb to the top. The walls are 1,487 meters in circumference.

The main buildings in the Detinets are the Cathedral of Holy Wisdom and the archiepiscopal/metropolitan compound in the northwestern corner. To the south of this, across the plaza in which stands the Monument to the Thousand Years of Russia
Millennium of Russia
The Millennium of Russia is a famous bronze monument in the Novgorod Kremlin. It was erected in 1862 to celebrate the millennium of Rurik's arrival to Novgorod, an event traditionally taken as a starting point of Russian history.A competition to design the monument was held in 1859...
, is the Novgorod Museum and the Novgorod Regional Library, housed in what had in the imperial period been the administrative building of Novgorod. The museum houses a fine icon collection and other artifacts from the city's history. Several smaller churches (the Church of the Intercession of the Mother of God along the southwestern wall near the Pokrovskii (Intercession) and Kokui towers, and the Church of St. Andrew Stratilates near the southeastern wall, and other buildings are found south of the museum, an area of the Detinets that has been left a park. There are numerous references in the chronicles to no longer extant buildings, including chapels over the gates (there were six in the republican period) and the Church of Sts. Boris and Gleb, built by Sitko Sitinits, who is thought to be the historic source for the legendary Sadko
Sadko
Sadko is a Russian medieval epic . The title character is an adventurer, merchant and gusli musician from Novgorod.-Synopsis:Sadko played the gusli on the shores of a lake. The Sea Tsar enjoyed his music, and offered to help him...
. An eternal flame to the soldiers of the German-Soviet War can be seen just inside the west gate of the fortress.