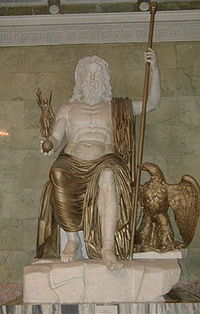 The visual symbolism of holding the world in one's hand, or perhaps even more ominously under one's foot, was a clear message used since antiquity
Ancient history
Ancient history is the study of the written past from the beginning of recorded human history to the Early Middle Ages. The span of recorded history is roughly 5,000 years, with Cuneiform script, the oldest discovered form of coherent writing, from the protoliterate period around the 30th century BC...
. Citizens of Rome
Rome
Rome is the capital of Italy and the country's largest and most populated city and comune, with over 2.7 million residents in . The city is located in the central-western portion of the Italian Peninsula, on the Tiber River within the Lazio region of Italy.Rome's history spans two and a half...
were familiar with the plain round globe as a representation of the world or universe, represented by Jupiter and thus the emperor's dominion and protectorate over it; for example a 4th century coin from the reign of Emperor Constantine I shows him holding a globus in hand, and a 2nd century coin from the reign of Emperor Hadrian
Hadrian
Hadrian , was Roman Emperor from 117 to 138. He is best known for building Hadrian's Wall, which marked the northern limit of Roman Britain. In Rome, he re-built the Pantheon and constructed the Temple of Venus and Roma. In addition to being emperor, Hadrian was a humanist and was philhellene in...
shows the Roman god Salus
Salus
Salus was a minor Roman goddess. She was the personification of well-being of both the individual and the state. She is sometimes erroneously associated with the Greek goddess Hygieia....
with his foot upon a globus. The orbis terrarum was central to the iconography of the Tetrarchy
Tetrarchy
The term Tetrarchy describes any system of government where power is divided among four individuals, but usually refers to the tetrarchy instituted by Roman Emperor Diocletian in 293, marking the end of the Crisis of the Third Century and the recovery of the Roman Empire...
, representing the Tetrarchs' claim of having restored security to the Roman world. At the Battle of Milvian Bridge
Battle of Milvian Bridge
The Battle of the Milvian Bridge took place between the Roman Emperors Constantine I and Maxentius on 28 October 312. It takes its name from the Milvian Bridge, an important route over the Tiber. Constantine won the battle and started on the path that led him to end the Tetrarchy and become the...
in 318, it is reported that Constantine I had a vision of the cross above the sun, as well as the words "In this sign, shall you conquer". Constantine's soldiers drew the cross on their shields, and defeated their foe, Maxentus. This heralded the beginning of the Christianity as the state religion of the Roman Empire.

With the growth of Christianity
Christianity
Christianity is a monotheistic religion based on the life and teachings of Jesus as presented in canonical gospels and other New Testament writings...
in the 5th century, the orb (in Latin scriptures orbis terrarum, the 'world of the lands', hence the word orb) was topped with a cross
Cross
A cross is a geometrical figure consisting of two lines or bars perpendicular to each other, dividing one or two of the lines in half. The lines usually run vertically and horizontally; if they run obliquely, the design is technically termed a saltire, although the arms of a saltire need not meet...
(hence globus cruciger), symbolising the Christian God's dominion over the world. Symbolically to Christians, the emperor held the world in his hand, on behalf of God. To non-Christians already familiar with the pagan globe, the surmounting of a cross sent a message about the triumph of Christianity. In medieval iconography, an object's scale and size indicated its importance relative to other, surrounding objects; the world is seen small and the ruler or celestial being large, to emphasise the importance of each element. Although the globe's symbolism was on a planetary scale, its use (in actual regalia
Crown jewels
Crown jewels are jewels or artifacts of the reigning royal family of their respective country. They belong to monarchs and are passed to the next sovereign to symbolize the right to rule. They may include crowns, sceptres, orbs, swords, rings, and other objects...
and emblematic) was proliferated among Christian rulers over small parts of the earth, not even all sovereign
Sovereignty
Sovereignty is the quality of having supreme, independent authority over a geographic area, such as a territory. It can be found in a power to rule and make law that rests on a political fact for which no purely legal explanation can be provided...
.

The first known use was probably in the early 5th century, possibly as early as between 395 and 408 on the reverse side of the coins of Emperor Arcadius
Arcadius
Arcadius was the Byzantine Emperor from 395 to his death. He was the eldest son of Theodosius I and his first wife Aelia Flaccilla, and brother of the Western Emperor Honorius...
, but most certainly by 423 on the reverse side of the coins of Emperor Theodosius II
Theodosius II
Theodosius II , commonly surnamed Theodosius the Younger, or Theodosius the Calligrapher, was Byzantine Emperor from 408 to 450. He is mostly known for promulgating the Theodosian law code, and for the construction of the Theodosian Walls of Constantinople...
.

The globus cruciger was used by powerful rulers and celestial beings
Angel
Angels are mythical beings often depicted as messengers of God in the Hebrew and Christian Bibles along with the Quran. The English word angel is derived from the Greek ἄγγελος, a translation of in the Hebrew Bible ; a similar term, ملائكة , is used in the Qur'an...
alike; it adorned portrayals of both emperor
Emperor
An emperor is a monarch, usually the sovereign ruler of an empire or another type of imperial realm. Empress, the female equivalent, may indicate an emperor's wife or a woman who rules in her own right...
s and king
Monarch
A monarch is the person who heads a monarchy. This is a form of government in which a state or polity is ruled or controlled by an individual who typically inherits the throne by birth and occasionally rules for life or until abdication...
s, as well as archangel
Archangel
An archangel is an angel of high rank. Archangels are found in a number of religious traditions, including Judaism, Christianity and Islam. Michael and Gabriel are recognized as archangels in Judaism and by most Christians. Michael is the only archangel specifically named in the Protestant Bible...
s. It first appeared on coin
Coin
A coin is a piece of hard material that is standardized in weight, is produced in large quantities in order to facilitate trade, and primarily can be used as a legal tender token for commerce in the designated country, region, or territory....
s in the early 5th century and remained popular throughout the Middle Ages in coins, iconography
Iconography
Iconography is the branch of art history which studies the identification, description, and the interpretation of the content of images. The word iconography literally means "image writing", and comes from the Greek "image" and "to write". A secondary meaning is the painting of icons in the...
and royal regalia
Regalia
Regalia is Latin plurale tantum for the privileges and the insignia characteristic of a Sovereign.The word stems from the Latin substantivation of the adjective regalis, 'regal', itself from Rex, 'king'...
. The papacy, holding universal canonical jurisdiction and in the Middle Ages once rivalling the Holy Roman Emperor
Holy Roman Emperor
The Holy Roman Emperor is a term used by historians to denote a medieval ruler who, as German King, had also received the title of "Emperor of the Romans" from the Pope...
for the supreme feudal status of liege lord of all other (Catholic) rulers, also maintained the symbol on top of the papal tiara
Papal Tiara
The Papal Tiara, also known incorrectly as the Triple Tiara, or in Latin as the Triregnum, in Italian as the Triregno and as the Trirègne in French, is the three-tiered jewelled papal crown, supposedly of Byzantine and Persian origin, that is a prominent symbol of the papacy...
("triple crown"; there is no separate papal orb). The crowned orb was in general use as a finial on western royal crowns, whether actual objects or merely heraldic crowns, all over Europe, for example in Denmark, Sweden, Belgium, the Netherlands, Italy, Spain, Portugal, Hungary, Romania, Yugoslavia and Imperial Germany, among others. It may still be seen in the national arms of the surviving European monarchies. Even in the modern era in England, the Sovereign's Orb
Sovereign's Orb
The Sovereign's Orb is a type of regalia known as a globus cruciger and is one of the British Crown Jewels.- History :It was created for the coronation of King Charles II in 1661 along with the Sceptre with the Cross and Ampulla....
symbolises both the state and Church of England
Church of England
The Church of England is the officially established Christian church in England and the Mother Church of the worldwide Anglican Communion. The church considers itself within the tradition of Western Christianity and dates its formal establishment principally to the mission to England by St...
under the protection and domain of the royal crown.