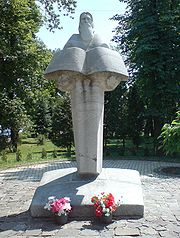 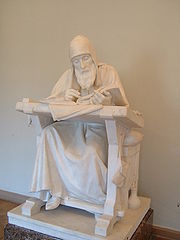 Saint Nestor the Chronicler (c. 1056 - c. 1114, in Kiev
Kiev
Kiev or Kyiv is the capital and the largest city of Ukraine, located in the north central part of the country on the Dnieper River. The population as of the 2001 census was 2,611,300. However, higher numbers have been cited in the press....
) was the reputed author of the Primary Chronicle
Primary Chronicle
The Primary Chronicle , Ruthenian Primary Chronicle or Russian Primary Chronicle, is a history of Kievan Rus' from about 850 to 1110, originally compiled in Kiev about 1113.- Three editions :...
, (the earliest East Slavic chronicle
Chronicle
Generally a chronicle is a historical account of facts and events ranged in chronological order, as in a time line. Typically, equal weight is given for historically important events and local events, the purpose being the recording of events that occurred, seen from the perspective of the...
), Life of the Venerable Theodosius of the Kiev Caves
Theodosius of Kiev
Theodosius of Kiev is an 11th century saint who brought Cenobitic Monasticism to Kievan Rus' and, together with St Anthony of Kiev, founded the Kiev Caves Lavra...
, Life of the Holy Passion Bearer
Passion bearer
In Orthodox Christianity, a passion bearer is a person who faces his or her death in a Christ-like manner. Unlike martyrs, passion-bearers are not explicitly killed for their faith, though they hold to that faith with piety and true love of God...
s, Boris and Gleb
Boris and Gleb
Boris and Gleb , Christian names Roman and David, respectively, were the first saints canonized in Kievan Rus' after the Christianization of the country....
, and of the so-called Reading.

Nestor was a monk
Monk
A monk is a person who practices religious asceticism, living either alone or with any number of monks, while always maintaining some degree of physical separation from those not sharing the same purpose...
of the Monastery of the Caves
Kiev Pechersk Lavra
Kiev Pechersk Lavra or Kyiv Pechersk Lavra , also known as the Kiev Monastery of the Caves, is a historic Orthodox Christian monastery which gave its name to one of the city districts where it is located in Kiev, the capital of Ukraine....
in Kiev from 1073. The only other detail of his life that is reliably known is that he was commissioned with two other monks to find the relic
Relic
In religion, a relic is a part of the body of a saint or a venerated person, or else another type of ancient religious object, carefully preserved for purposes of veneration or as a tangible memorial...
s of St. Theodosius of Kiev
Theodosius of Kiev
Theodosius of Kiev is an 11th century saint who brought Cenobitic Monasticism to Kievan Rus' and, together with St Anthony of Kiev, founded the Kiev Caves Lavra...
, a mission which he succeeded in fulfilling. It is also speculated that he supported the reigning prince Svyatopolk II
Sviatopolk II of Kiev
Sviatopolk II Iziaslavich was supreme ruler of the Kievan Rus for 20 years, from 1093 to 1113. He was not a popular prince, and his reign was marked by incessant rivalry with his cousin Vladimir Monomakh...
and his pro-Scandinavia
Scandinavia
Scandinavia is a cultural, historical and ethno-linguistic region in northern Europe that includes the three kingdoms of Denmark, Norway and Sweden, characterized by their common ethno-cultural heritage and language. Modern Norway and Sweden proper are situated on the Scandinavian Peninsula,...
n party and disliked Greek
Byzantine Empire
The Byzantine Empire was the Eastern Roman Empire during the periods of Late Antiquity and the Middle Ages, centred on the capital of Constantinople. Known simply as the Roman Empire or Romania to its inhabitants and neighbours, the Empire was the direct continuation of the Ancient Roman State...
influence in Kiev.

His chronicle begins with the Deluge, as those of most Christian chroniclers of the time did. The compiler appears to have been acquainted with the Byzantine
Byzantine Empire
The Byzantine Empire was the Eastern Roman Empire during the periods of Late Antiquity and the Middle Ages, centred on the capital of Constantinople. Known simply as the Roman Empire or Romania to its inhabitants and neighbours, the Empire was the direct continuation of the Ancient Roman State...
historians; he makes use especially of John Malalas
John Malalas
John Malalas or Ioannes Malalas was a Greek chronicler from Antioch. Malalas is probably a Syriac word for "rhetor", "orator"; it is first applied to him by John of Damascus .-Life:Malalas was educated in Antioch, and probably was a jurist there, but moved to...
and George Hamartolus
George Hamartolus
George Hamartolos or Hamartolus was a monk at Constantinople under Michael III and the author of a chronicle of some importance. Hamartolus is not his name but the epithet he gives to himself in the title of his work: "A compendious chronicle from various chroniclers and interpreters, gathered...
. He also had in all probability other Slavonic language chronicles to compile from, which have since been lost. Many legends are mixed up with Nestor's Chronicle; the style is occasionally so poetical that perhaps he incorporated bylina
Bylina
Bylina or Bylyna is a traditional Russian oral epic narrative poem. Byliny singers loosely utilize historical fact greatly embellished with fantasy or hyperbole to create their songs...
s which are now lost.

As an eyewitness
Witness
A witness is someone who has firsthand knowledge about an event, or in the criminal justice systems usually a crime, through his or her senses and can help certify important considerations about the crime or event. A witness who has seen the event first hand is known as an eyewitness...
he could describe only the reigns of Vsevolod I and Svyatopolk II (1078-1112), but he could have gathered many interesting details from the lips of old men, two of whom could have been Giurata Rogovich of Novgorod, who could give him information concerning the north of Rus'
Kievan Rus'
Kievan Rus was a medieval polity in Eastern Europe, from the late 9th to the mid 13th century, when it disintegrated under the pressure of the Mongol invasion of 1237–1240....
, Pechora River
Pechora River
The Pechora River is a river in northwest Russia which flows north into the Arctic Ocean on the west side of the Ural Mountains. It lies mostly in the Komi Republic but the northernmost part crosses the Nenets Autonomous Okrug. It is 1,809 km long and its basin is 322,000 square kilometers...
, and other places, and Yan Vyshatich
Yan Vyshatich
Yan Vyshatich was a Kievan nobleman and military commander . The last known representative of the Dobrynya dynasty, Yan Vyshatich was the son of Vyshata and grandson of Ostromir....
, a nobleman ninety years of age, who died in 1106. Many of the ethnological details given by Nestor of the various tribes of the Slavs are of the highest value.

The current theory about Nestor is that the Chronicle is a patchwork of many fragments of chronicles, and that the name of Nestor was attached to it because he wrote the greater part or perhaps because he put the fragments together. The name of the hegumen
Hegumen
Hegumen, hegumenos, igumen, or ihumen is the title for the head of a monastery of the Eastern Orthodox Church or Eastern Catholic Churches, similar to the one of abbot. The head of a convent of nuns is called hegumenia or ihumenia . The term means "the one who is in charge", "the leader" in...
Sylvester
Sylvester of Kiev
Sylvestr was a clergyman and a writer in Kievan Rus.Some sources name Sylvestr as a compiler of either the Primary Chronicle itself or its second edition. He was a hegumen of the Vydubetsky Monastery in Kiev, which had been founded by Prince Vsevolod Yaroslavich...
is affixed to several of the manuscripts as the author.

Historian Sergey Solovyov
Sergey Solovyov
Sergey Mikhaylovich Solovyov was one of the greatest Russian historians whose influence on the next generation of Russian historians was paramount. His son Vladimir Solovyov was one of the most influential Russian philosophers...
remarked that Nestor cannot be called the earliest Russian chronicler, but he is the first writer who took a national point of view in his history, the others being merely local writers. The language of his work, as shown in the earliest manuscripts just mentioned, is Palaeo-Slavonic with many Russisms.

St Nestor died around the year 1114, and was buried in the Near Caves
Near Caves
The Near Caves or the Caves of Saint Anthony are historic caves and a network of tunnels of the medieval cave monastery of Kiev Pechersk Lavra in Kiev, the capital of Ukraine...
. He has been glorified
Canonization
Canonization is the act by which a Christian church declares a deceased person to be a saint, upon which declaration the person is included in the canon, or list, of recognized saints. Originally, individuals were recognized as saints without any formal process...
(canonized) as a saint
Saint
A saint is a holy person. In various religions, saints are people who are believed to have exceptional holiness.In Christian usage, "saint" refers to any believer who is "in Christ", and in whom Christ dwells, whether in heaven or in earth...
by the Russian Orthodox Church
Russian Orthodox Church
The Russian Orthodox Church or, alternatively, the Moscow Patriarchate The ROC is often said to be the largest of the Eastern Orthodox churches in the world; including all the autocephalous churches under its umbrella, its adherents number over 150 million worldwide—about half of the 300 million...
. The body of the ancient chronicler may be seen among the relics preserved in the Kiev Caves Laura. His feast day is celebrated on October 27. He is also commemorated in common with other saints of the Kiev Caves Laura on September 28 (Synaxis
Synaxis
In Eastern Christianity , a Synaxis is an assembly for liturgical purposes, generally through the celebration of Vespers, Matins, Little Hours, and the Divine Liturgy....
of the Venerable Fathers of the Kiev Caves) and on the Second Sunday of Great Lent
Great Lent
Great Lent, or the Great Fast, is the most important fasting season in the church year in Eastern Christianity, which prepares Christians for the greatest feast of the church year, Pascha . In many ways Great Lent is similar to Lent in Western Christianity...
.